Every hunter has that special trophy he is search for. Whether big game or small game, there usually is that certain size. The score of the antlers, the weight of the animal, the length of the tail and so on. Yesterday Jake provided one of those trophies for me. It was a trophy that had no measurements but could only be scored by a judge. That judge was me.


The day started as all days have this week. Cold with frozen northern slopes to encounter. I had decided to hunt this country because of the steep southern slopes that would be burnt off. Of course, like most intelligent chukar hunters, I hadn't rationalized that for every steep burnt off slope there would be at least one frozen steep hill to encounter. By the end of the day my body told me that it was more of a 3 to 1 ration on the frozen side. Jake covered the hills like there was no difference. He logged five times the miles that I did and probably five times the elevation.


As we started up the snow covered draw, I was hoping for maybe a covey or two being down low in the thistles. By the amount of sign, I could see they had been there and it wasn't long before I saw a nice covey flush from about two hundred yards up the hill. Shortly after, I saw Jake standing where they had flown from. Evidently he followed the running birds up the hill and must have given chase. Most hunters probably would have been scolding their mutts but I just whistled at him to get back down here. I never could have gotten to those birds anyhow was my excuse for Jake's chasing. In truth, that probably happens more than I know on running birds. How would I ever know? Sometimes he's out there three hundred yards away.


We kept trucking up the draw until we hit our first burnt slope. It was about 1300 feet higher than where we had started. Jake was immediately on birds and it wasn't long before we had the first point which produced a rather nice covey. As I've gotten older, my reflexes have slowed considerably and I could only get one shot off from my double gun. It hit it's mark but Jake was watching the covey and giving a short thirty yard chase. I had to convince him that there was a dead bird and threw a rock in the direction the bird went down. He found the bird and happily brought it to me. Another covey had flown from higher on the mountain and swung around the same direction so we decided to pursue them.


Shortly over the ridge the birds had flown was another frozen side to encounter before the burnt ridge I figured the birds had flown to. It was only about 100 yards wide but took at least 10 minutes for me to dig my feet in and negotiate across. It took Jake about 10 seconds. I was about half way across the ice covered slope when Jake went on point. It was hard enough just getting myself and gun over to him safely so I left the camera in my pocket. I walked in on the birds about twenty yards above Jake and as the covey exploded I noticed there seemed to be a few birds added to it. I had the same result as earlier but two stragglers held back and I got a shot at them with my remaining shell. There was probably five seconds between the covey flush and the straggler's flush, but I'm still going to count it as a double.


Anyhow, the next two hours continued on the same path. Gaining elevation and finding some burnt off slopes with lot's of cheat and bunch grass for the birds. The bunch grass was great for grabbing on to with my spare hand to keep me from falling. My shooting wasn't always so good but Jake offered me plenty of opportunities. One more time, Jake flushed some birds from about 200 yards above me and they flew straight over me. Even if I would have wanted to, I couldn't shoot because I was lucky just to be standing up on the slope. Sometimes I was questioning how much fun I was having. Was, it worth fighting these slopes for the birds? Then, I'd watch Jake slam on point and remove my doubts.


Our trophy bird came at about 3 and one half hours into the hunt. I could see Jake at a distance working his nose and going straight up hill on a frozen slope. As he disappeared over the ridge I expected to see chukars flushing from the area. Thirty seconds later my astro beeped "dog on point". I looked at the distance which said 232 yards away. At that point I was hoping I would see the birds and I could call him back down the hill to me. But the astro stayed on pointing dog. He was at least two hundred feet in elevation above me and 232 yards away as the crow flies. I didn't want to go up there and as I struggled up the hill I was hoping he'd quit waiting for me and break point.


It was just shy of 30 minutes when I finally reached the edge of the hill where the snow quit and the open slope began. I knew Jake was about 40 yards away and frantically looked for him, not wanting to screw this up after all that time. I found him hard on point and slid the camera out of my pocket as I approached. I zoomed in the best I could and then pocketed the camera 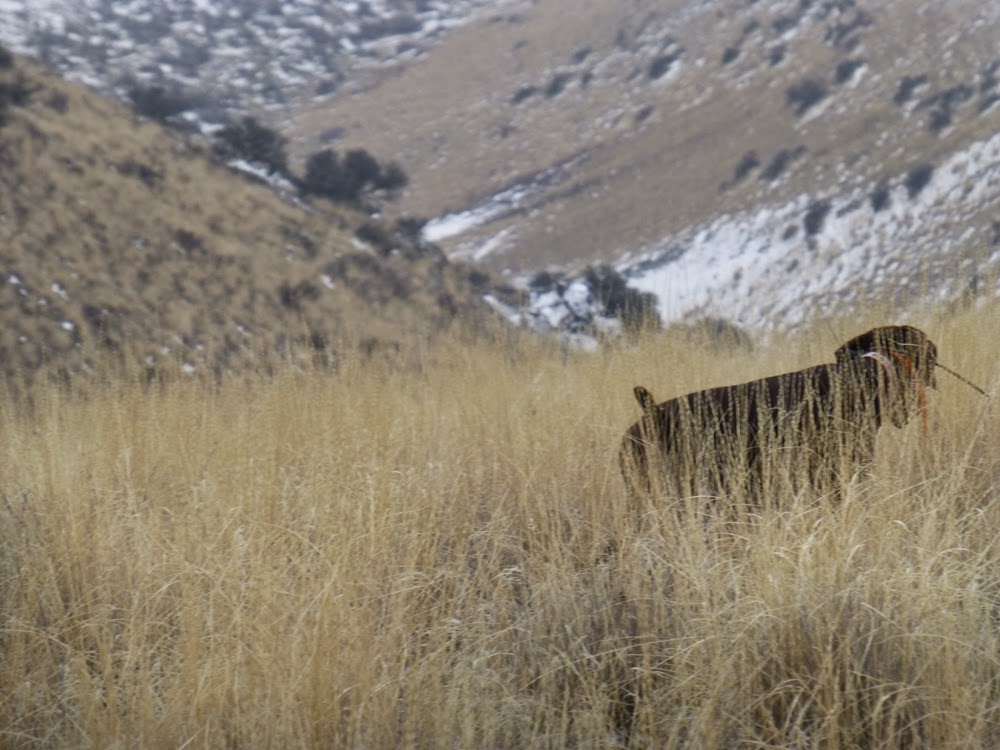 . Moving slowly I finally got to the right and front of Jake before the birds exploded. I think the number of birds that flushed got me frustrated and I missed. Discussed with myself, I was about to break open my gun when the straggler took off. I drew feathers but the bird kept flying down the draw. Suddenly, it flew straight up in the air and fell to the canyon. The flapping of the bird flying straight up caught Jake's attention and he watched it fall. He was immediately off for the retrieve. He disappeared down the canyon and all I could do was hope. There was no way I was going down into that draw and then have to come back up. About ten minutes later, up comes Jake with the bird in his mouth. I have no idea as to whether he had to chase the bird down or it just took him awhile to find the bird, I just know I was tickled with my 22 month old dog. 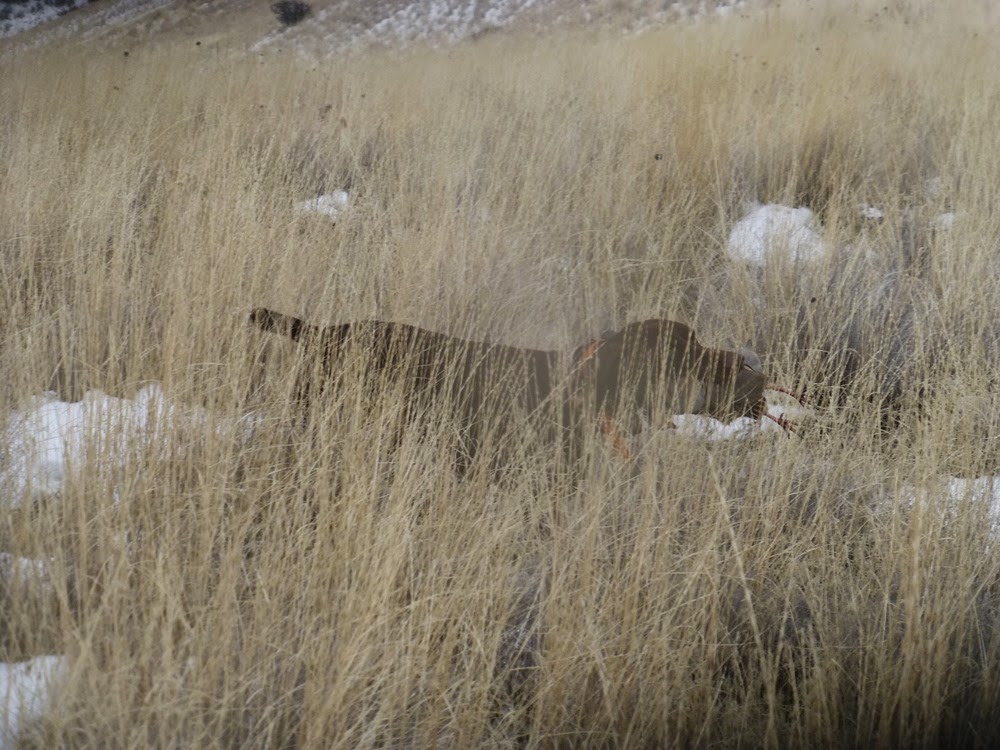 From the time of Jake's point until the retrieve, I figured about 45 minutes had elapsed. That's definitely a trophy experience for me and Jake. I'm sure there will be many more in our future.
Posted by larry szurgot at 8:05 PM

Wow, Larry! What an incredible day you had, and Jake just keeps getting better and better. Exciting post to read. Thank you! You must be using quite a bit of "vitamin I" (or I would be) after hunts like that!

Good for Jake! Great story Larry. Enjoyed reading it. One for the memory books. I can't believe the weather down there. Still in the 50's here and no snow on the ground. Hope you have a hot tub to soak in after you get back from the hunt. Keep having fun.
Alan and Mays

Thanks Bob and Alan. It was a great day. Than there was today. I think maybe I'll not post about today and how Jake chased and I shot like sh. Enough said.

I was on slopes like that during our hunt in Idaho last week. We did manage 4 chukars one day, which is really good for me. We hunted about 3 hours a day, and I would manage about 1 mph for chukars, better for quail on flatter ground. Knees held up, thankfully. Annie did quite well, had some nice points. It was a great time and once again I hated to leave to come back to the so called frozen north. Not so frozen this year as Alan mentioned. Thanks for your blog! Larry
PS I had a day where I couldn't hit them, but unlike you, it is more normal for me.

Thanks for the kind comments and congrats on your trip to Idaho. Don't trust my blog as a testament to my shooting. It's a lot more fun to mention the day that I went 8 for 8 than it is to mention the time I went 19 straight without knocking out a feather. Send some of that good Alaska weather this way.

Wow, 45 minutes must be the outer limits even for a career chukar hunter like yourself....congrats to Jake. The frozen slopes are a good reminder why we are packed and leaving for AZ with 500 20 ga shells in a week.

Great Post, Larry. I've had several birds do that thing where they fly straight up, stall, and fall to the ground. I don't remember them ever running after they hit the ground. ...Maybe your dog took a couple breaks on the way back up the hill. Either way, impressive story!