It's taken me several decades, but I think I finally figured out why some people struggle finding chukars while others seem to always be able to find enough to fill their dinner plate. Don't get me wrong, I don't know if I qualify as one of the elite chukar hunters, but I have covered enough hard miles to qualify myself as a chukar hunter.

It's a known fact, that to qualify at being a true chukar hunter, is that you must be brain dead. Only someone who lacks intelligence would continually chase these devil birds up and down the steep ravines that they tend to like. That being said, I think most hunters who decide to chase the chukar think too much and put them at a disadvantage. I've been trying to think a lot lately, about the why's and wherefore's of chukar hunting, and my bird vest has been a lot lighter because of it. I figured as dry as it's been, the birds must be near water or they might be close to any green up. I've looked over the mountain range and said, "If I were a chukar where would I most likely want to be?" I'd then let Jake loose and head up the mountain.

Tuesday the alectorus chukar smacked me on the side of the head with a piece of sage brush. Jake and I were driving down an old cattle road in a dry ravine that I never would have thought held chukars. The only reason we were there was five miles further on this rocky road was a great place to find birds. You can imagine my surprise when about fifty birds flushed off the road. They split up and flew up the canyon walls about forty yards or so before landing. Jake saw them too. It didn't much look like a place I wanted to hunt, but Jake wanted to give it a try. We drove up the road a quarter of a mile or so and after putting the collar on Jake we headed off. Jake knew exactly where the birds were and I had to persuade him to stay in contact with me.

I flipped a coin to decide which side of the canyon to go on and started up. I knew the birds would probably be running uphill, which soon proved to be right with Jake hot on their tail. I'm not sure, but with Jake being three months shy of two years old, I don't know if he has ever seen this many birds running in the wide open. After I had gained about 300 feet in elevation and Jake about 600, the chukars flew across the canyon to the chukars talking on the other side. Ten minutes into the hunt I was already sweating and discouraged. As I said, I would never have picked this spot to hunt and was ready to head back down when my astro said "dog on point". I couldn't see Jake but suspected maybe he had a straggler on point and it was my duty to get to him. As I crested this arm of the canyon there was a little more cover and Jake had a point on a piece of sage. To my shock, about fifteen birds took off and I managed to knock one down. 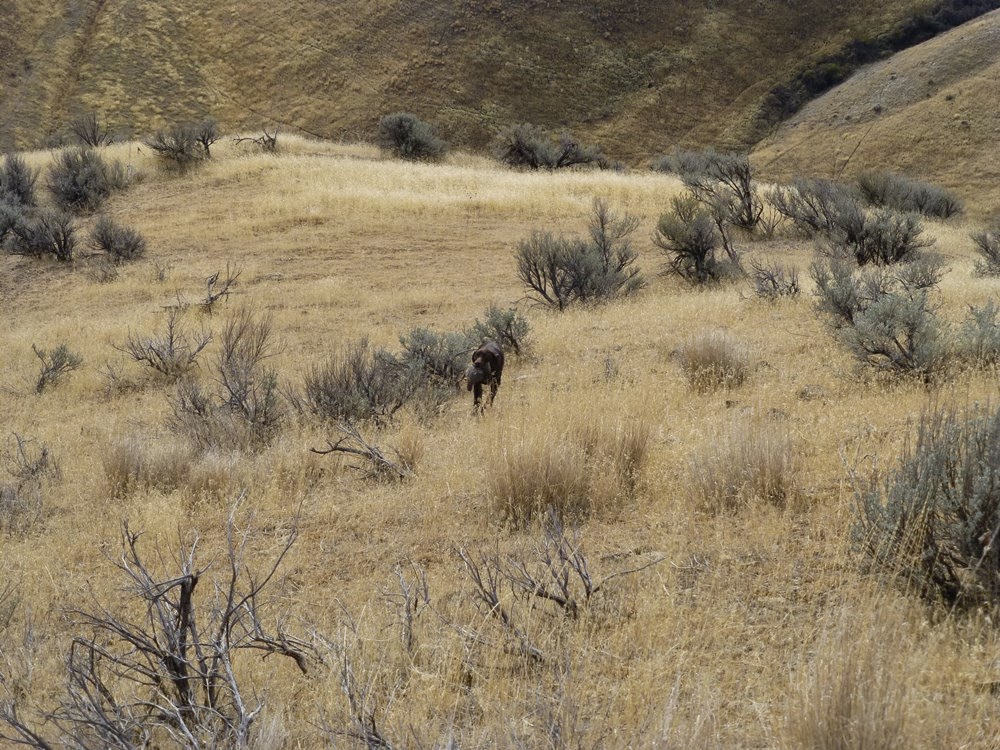 The birds flew around the canyon and I decided to pursue a little further. It still wasn't someplace I would probably hunt, but I was already there. By the end of day one this was Jake's take. 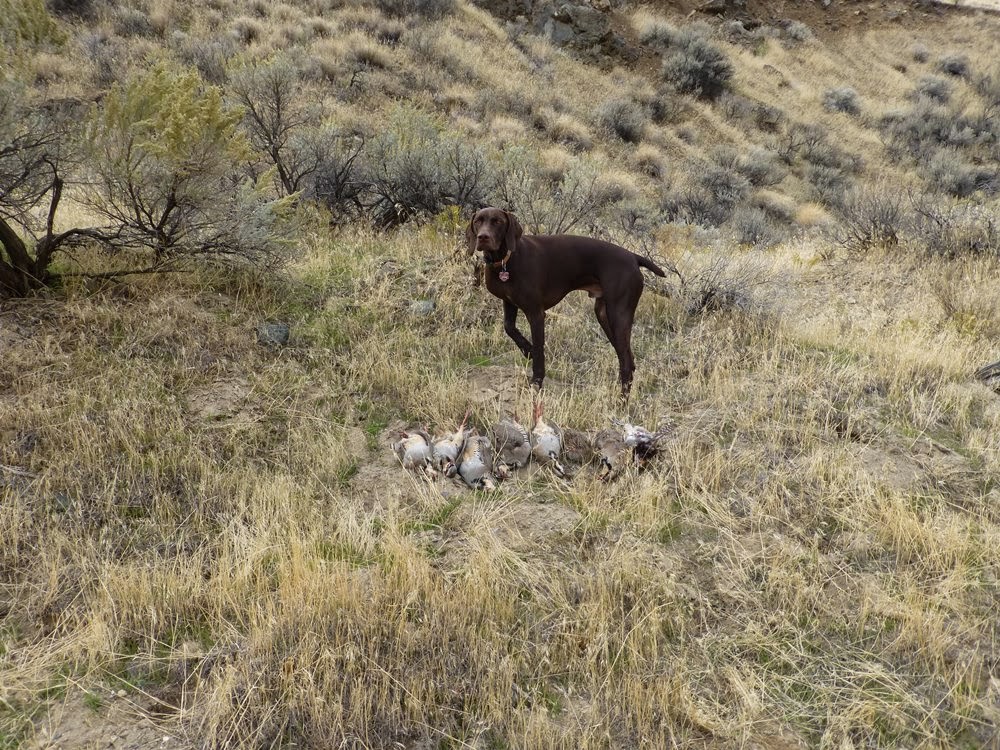 These birds were taken in an area that I never even thought birds would survive. No water, no green up, nothing that should attract chukars. Most of the area looked like this. 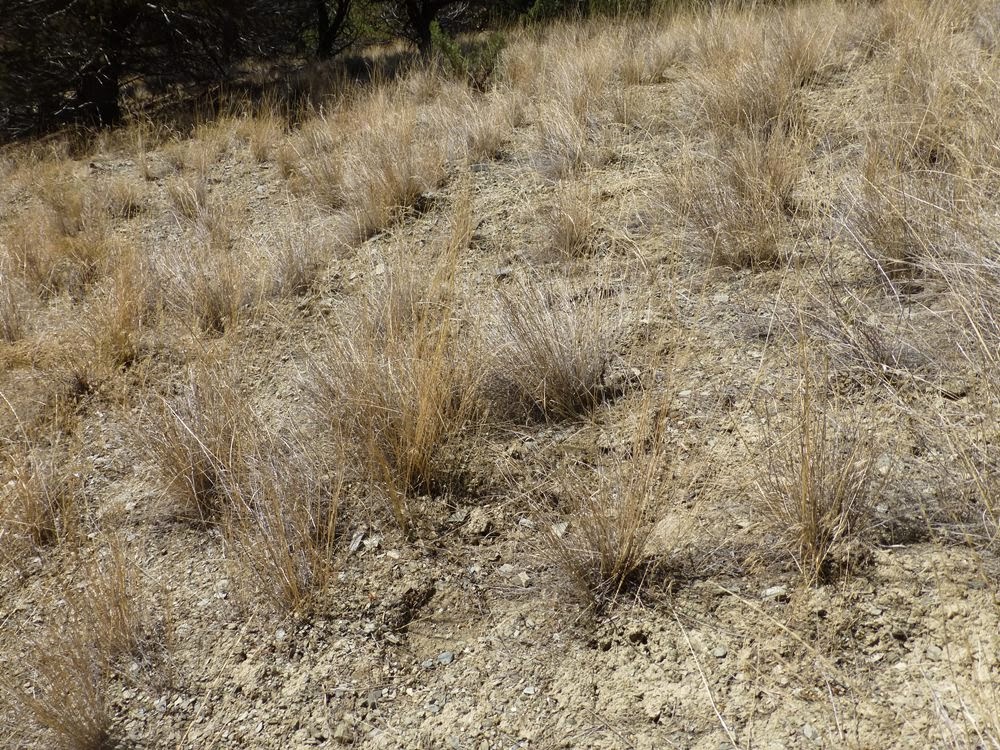 Point is, I think we over think this chukar stuff. Just get out and hunt. The more miles put on by you and your dog, the more likely to find birds. Jake and I hunted five of the last six days and I logged 31 1/2 miles and Jake logged 109 miles. I have to admit that it will probably the last time I put in those kind of miles on the steep chukar hills because of how bad both Jake and I are hurting tonight. We're going to start spreading those days out some.

My point is, I've been reading a lot of negative comments about the chukar numbers, and although the numbers are still down some, they're still out there. On my five days on the mountain and the back roads I never saw another chukar hunter and only heard two distant shots. People have given up, which is alright with me and Jake. The birds are out there for those who really love to chukar hunt.
I have to admit to not hearing chukars. The first birds I found were chucking, but I never heard another bird the whole week.

That's it for my inspirational speech for this week. I'll blow Jake's horn with a picture essay the rest of the way.

Hustle up here. There are birds everywhere. 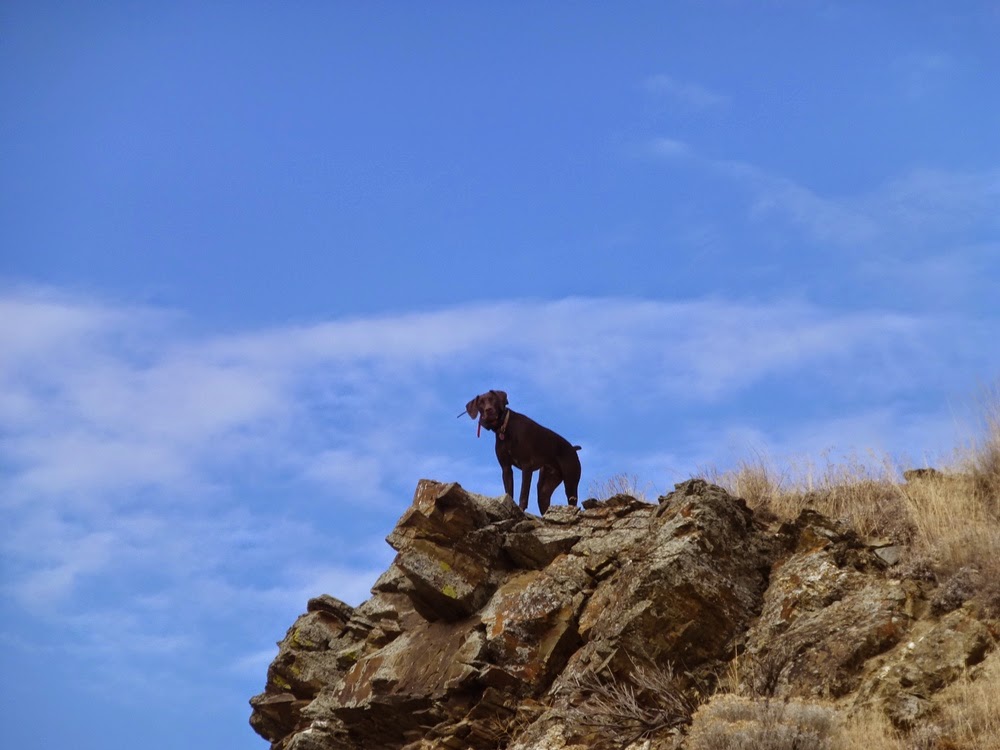 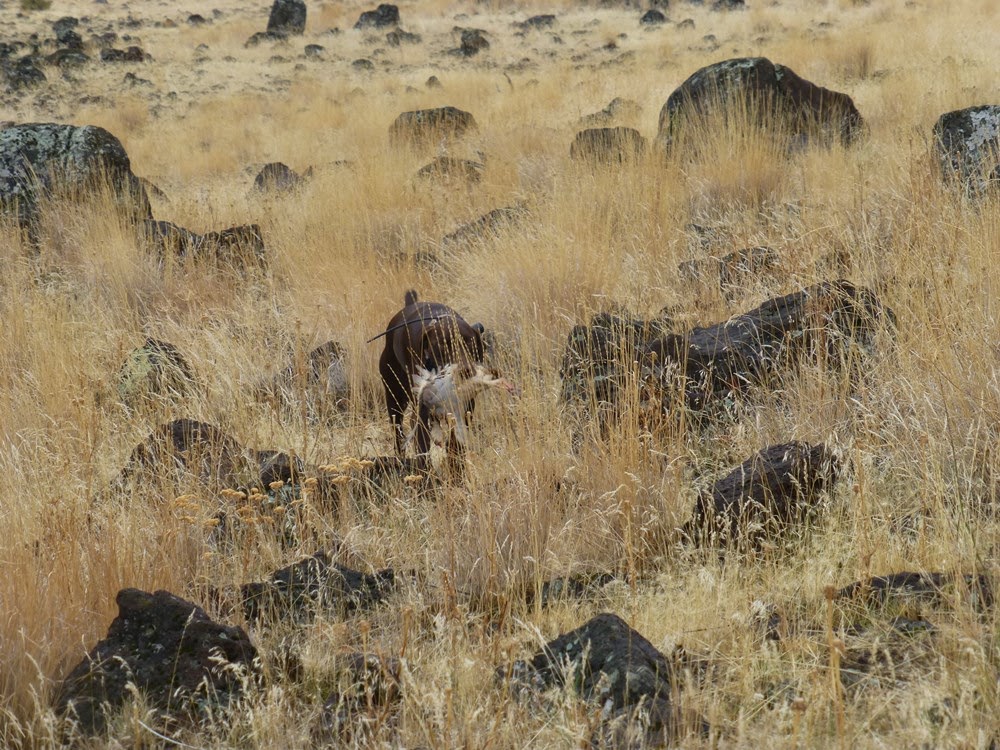 There's a big one here somewhere. 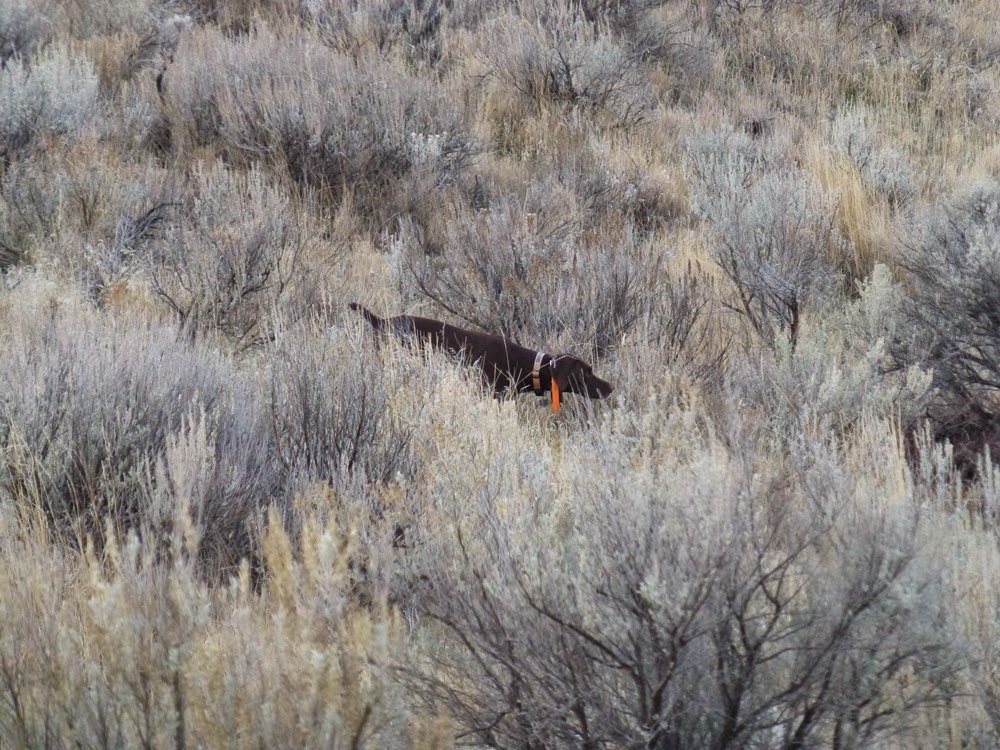 You know where I'd like to put this one. Quit crippling them. 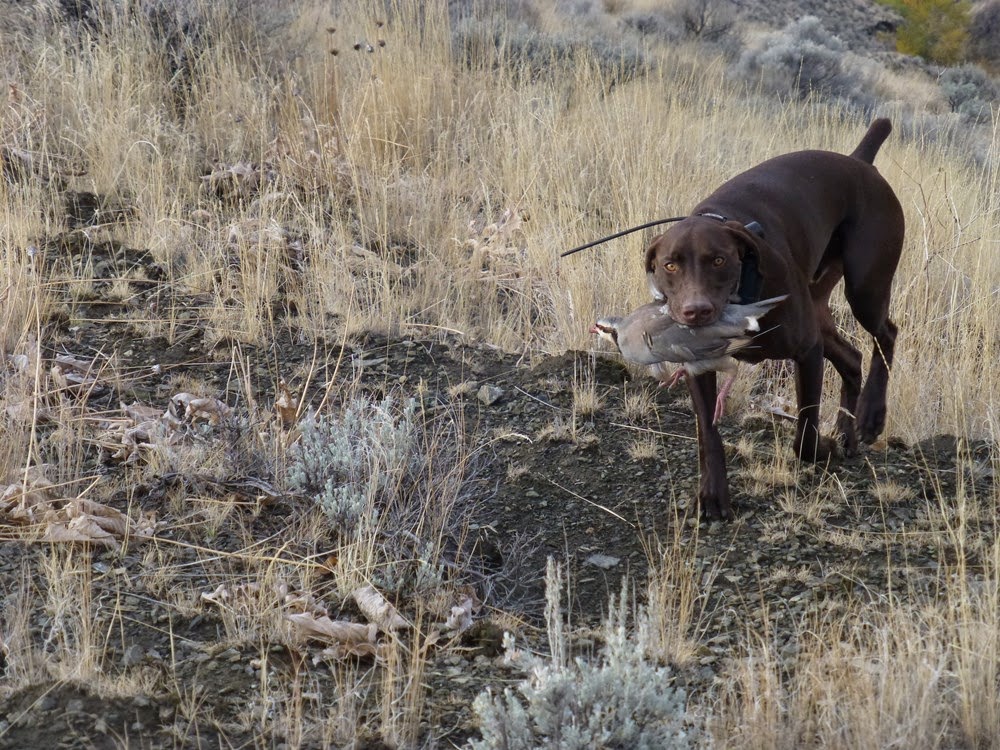 There down this way. 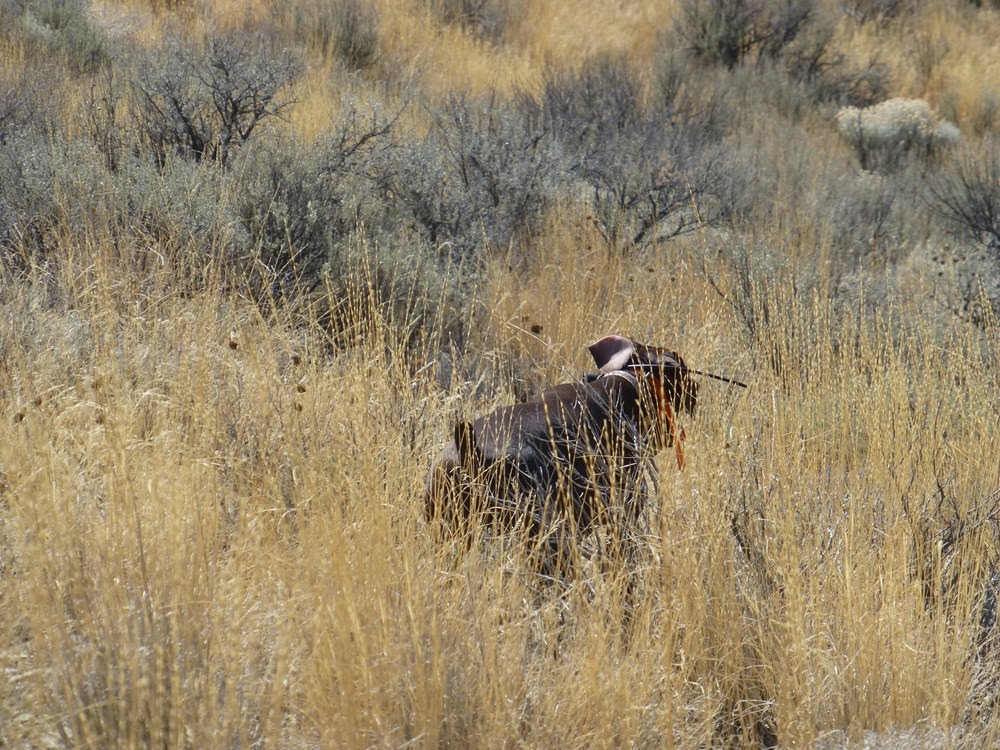 This mountain is steeper than you think. Try dropping them as soon as they get up. 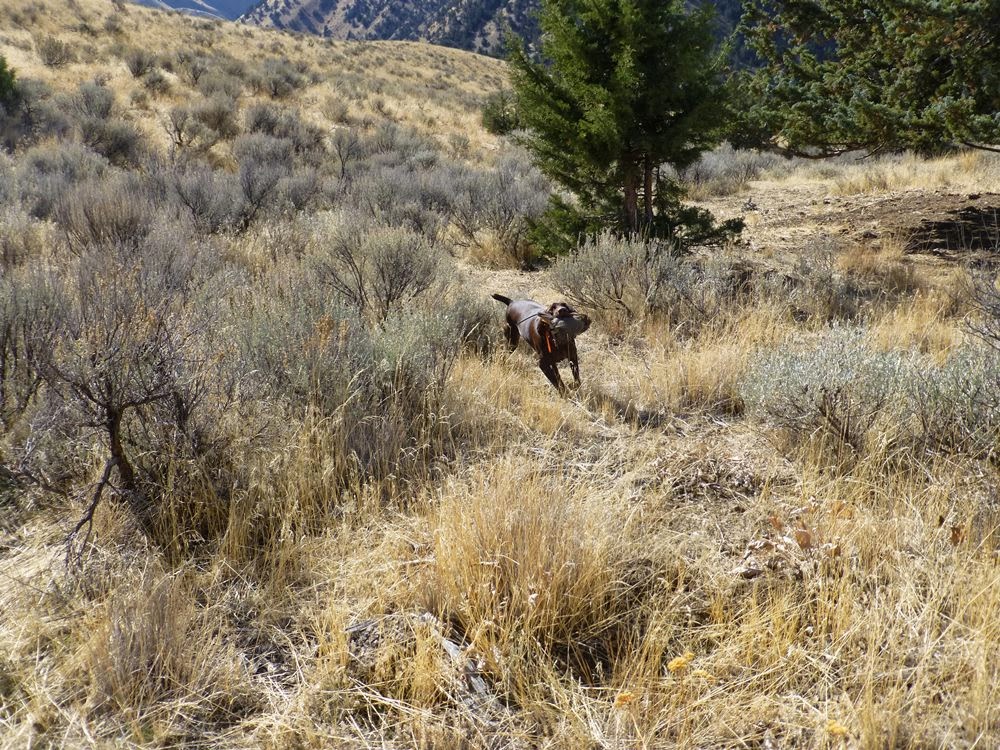 Hey, we don't got all day. Get over here. 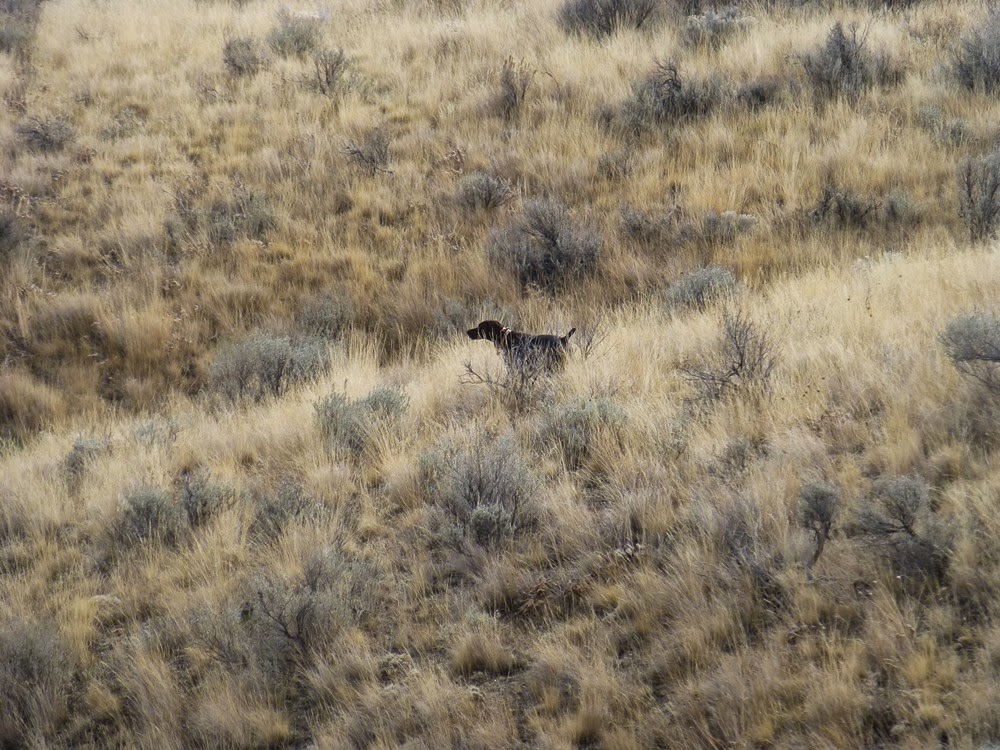 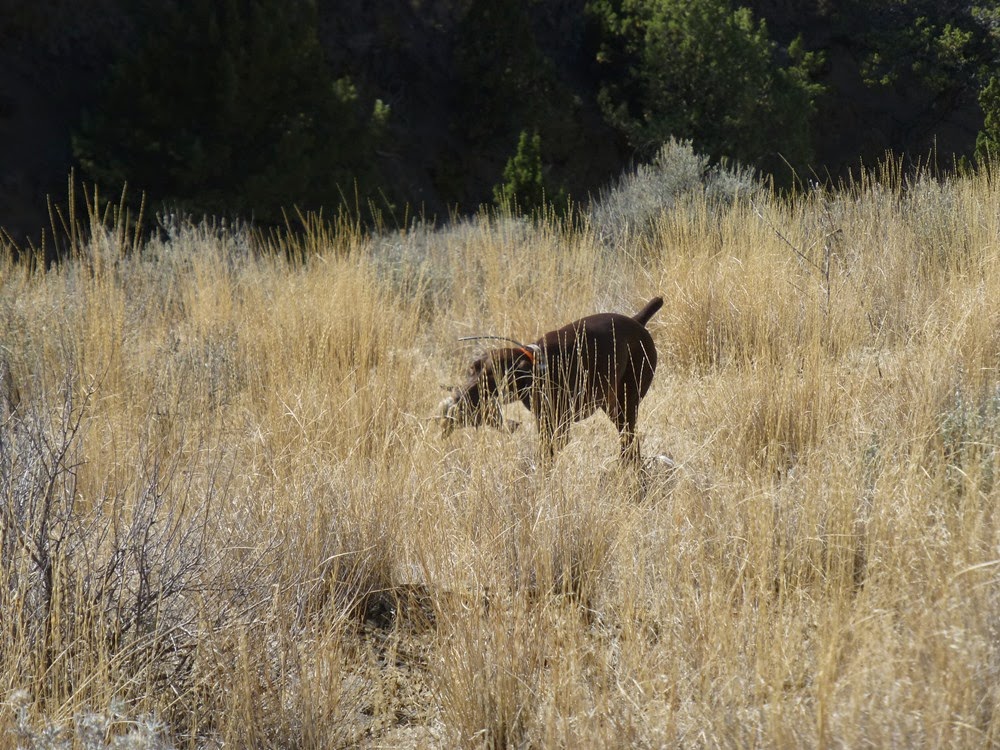 Try and get this one on top. I'm tired of this up and down stuff while you stand in one spot. 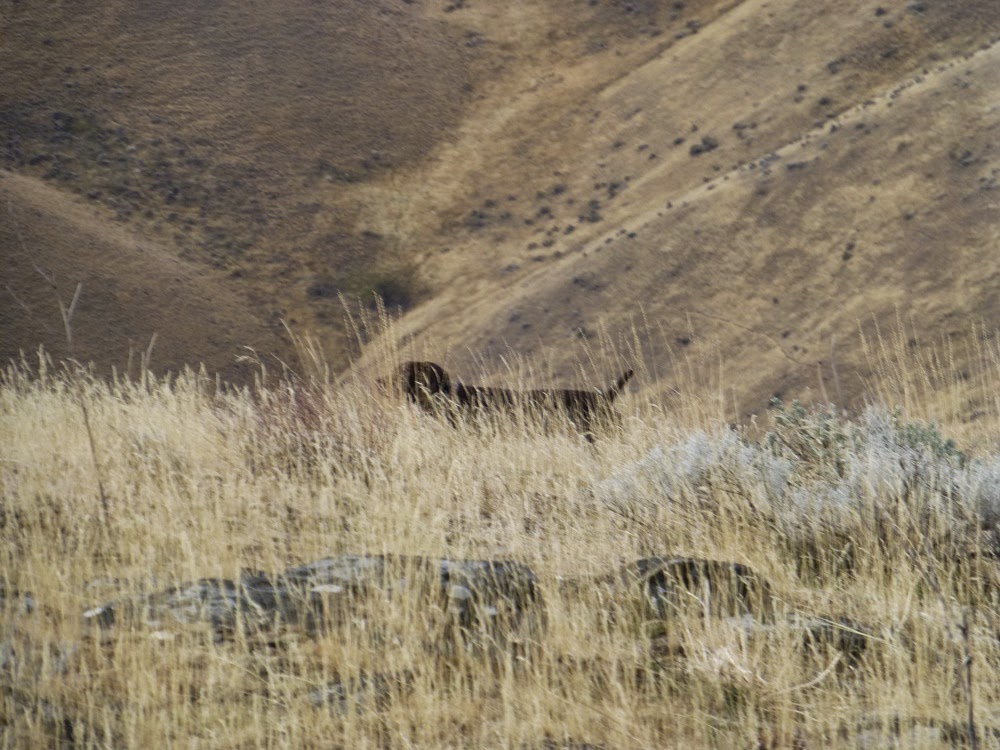 What do you mean they don't hide in the dirt? That's not gophers I'm smelling. 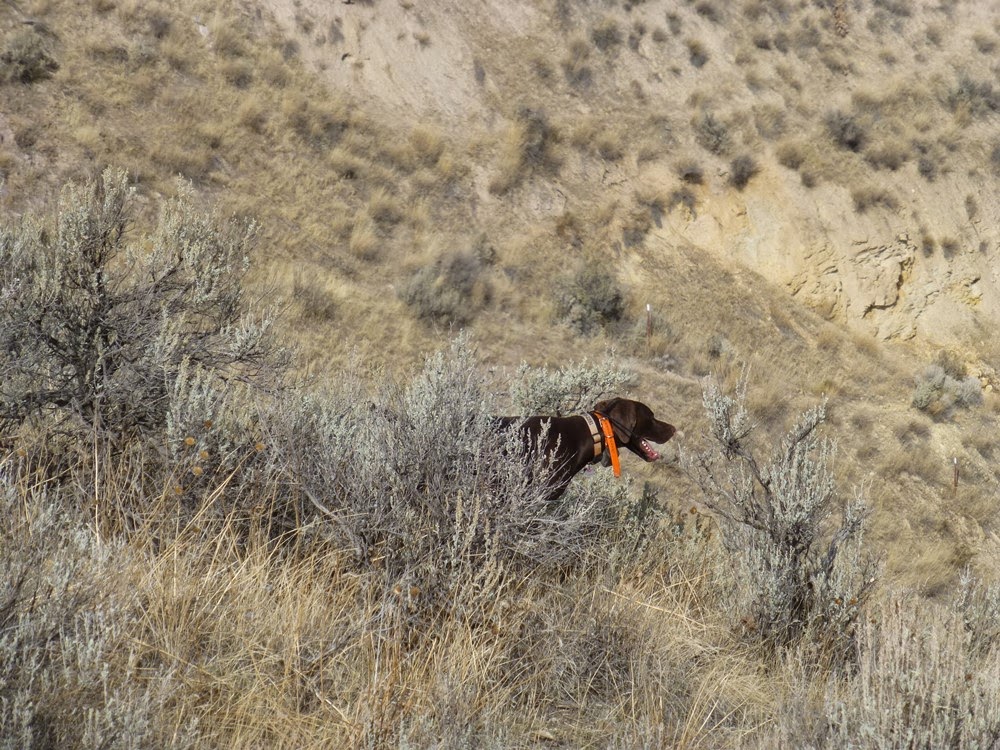 Luckily for Jake, Barb came over and camped with us for our 40th anniversary. She insisted that Jake and I take a break on day five and just take a ride and short hike. Here's a couple of our sightings. This lamb got caught off guard. 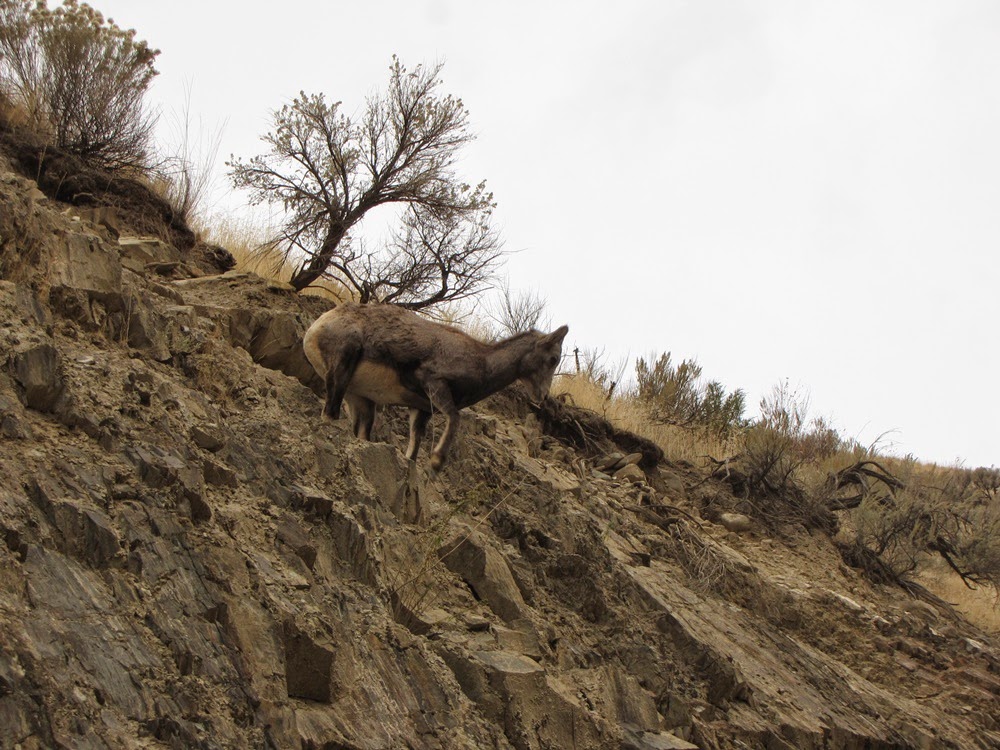 Love can you in a lot of trouble. 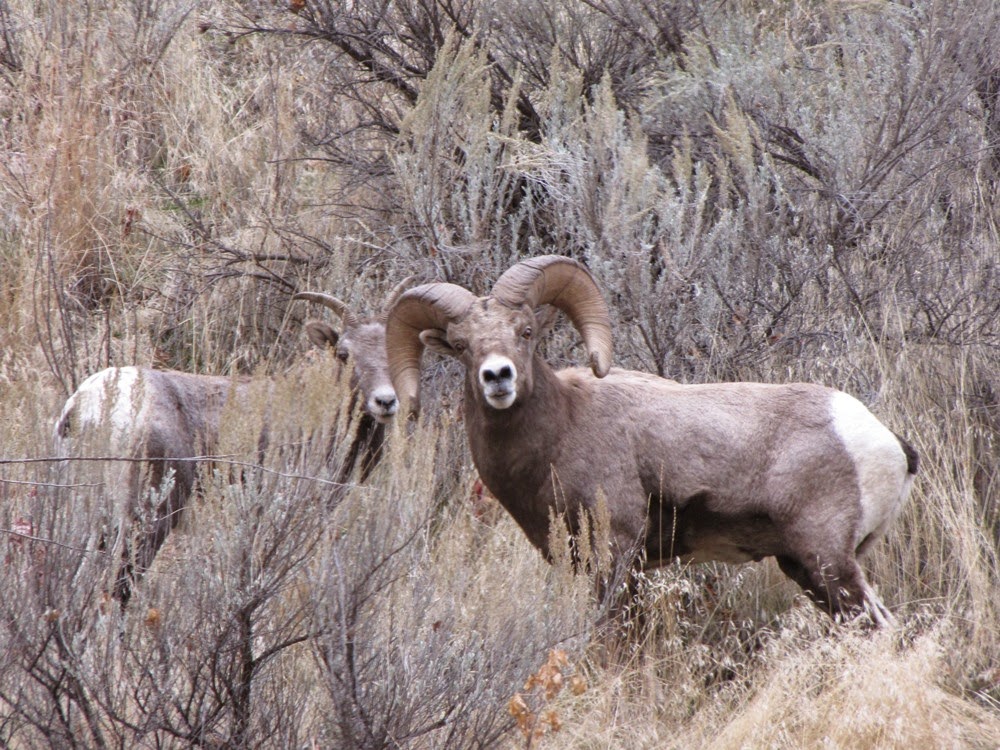 A short hunt on day six and than home. I didn't even want to go out this morning but the big guy made me. Look how steep this hill is. I hope he misses because the bird will roll forever. 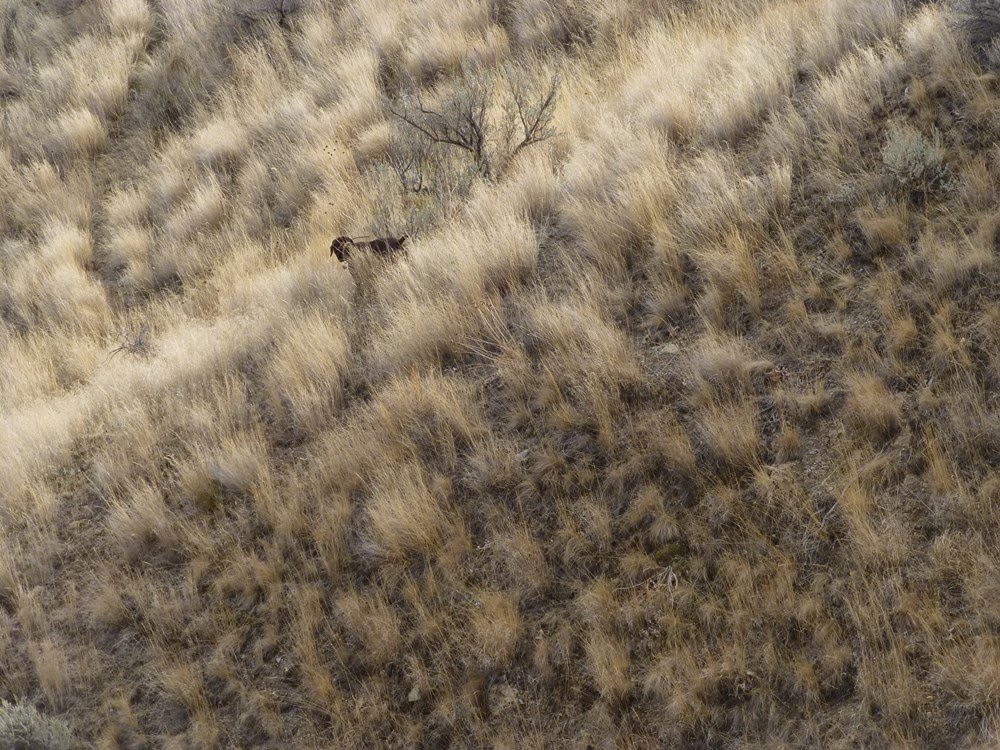 I shouldn't have to listen to this. Would you shut this guy up. 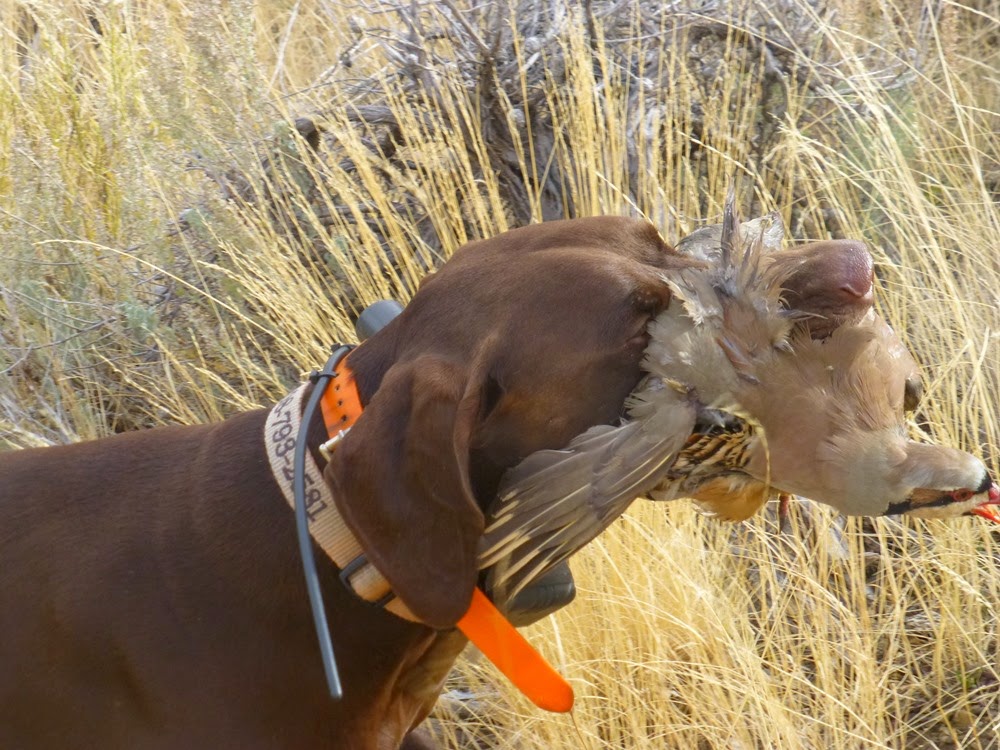 Okay. Enough is enough. This bird could end it all. Don't screw up. 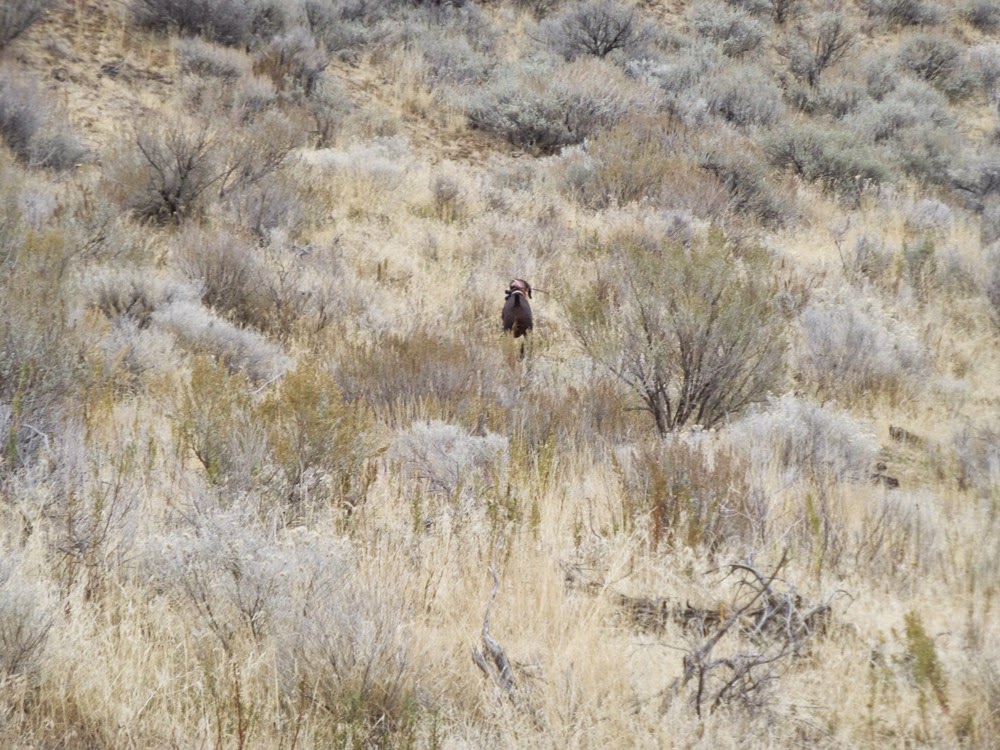 I'll give it to you. That was a great shot. Now can we please go home. 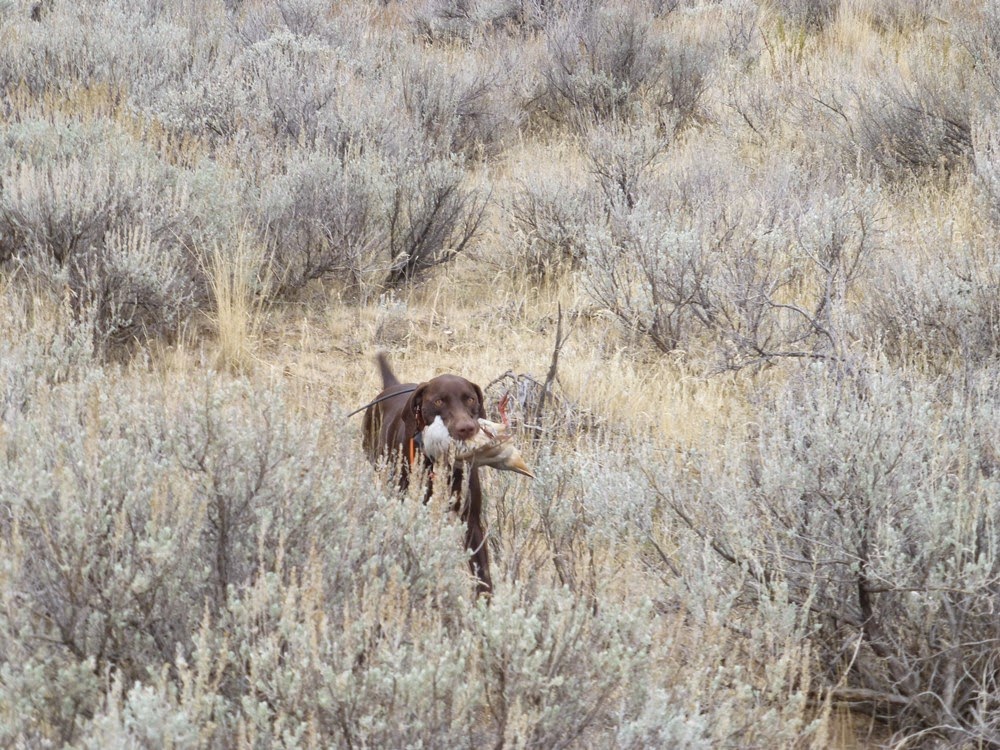 Posted by larry szurgot at 6:56 PM

I hear you, Larry. Your post must have been directed at me, for good reason. I'm glad you found 'em, or happened on them. I'm not deterred by my lack of luck, but just puzzled. Thanks for the pep talk.

I think too much a lot of the time also. I remember telling my wife, I should just let the dog lead me to the birds . Lots of comparisons concerning the steep climbing between chukar and ptarmigan hunting. The dog's thoughts seem to be similar as well. Have fun.
Alan and Mays

I admire your stamina! And I am envious of your shooting ability. Chukars are especially difficult for me to hit, especially the downhill rockets.
Hope to find some birds in ID next week!

your blog is great. Thanks.

I, too have a tough time on the downhill shots. It's tough forcing myself to shoot under them. Good luck next week.

Larry,
I do use the belt clip to keep it attached to my vest. Maybe that is the reason why I quite often get bad readings from my compass. I'm going out Monday again and will be testing that.
Thanks
Larry and Jake