Chukar hunting. Every trip is an adventure

It might seem like all my trips are successful. Believe me, they aren't. It's just more fun to write about the successful ones or the ones that have some type of different adventure than the usual hunts. Every chukar hunt seems to have excitement in one form or another. Sometimes good and sometimes not so good. Yesterdays hunt had a little of both.

The day started as usual when I hunt with Greg Allen. We meet at the usual truck stop and load our gear into one of our trucks. Of course the dogs are situated in the back seat nice and comfortable. As we drive, we decide where we are going to hunt for the day and discuss the happenings of the week. Once at our location Greg comments about the light and that the next trip we're going to have to either get started a little later or start carrying flashlights. It was barely shooting light and seemed more like duck hunting rather than chukar hunting.

With three GSP's running circles, trying to get us to hurry, we made our decisions of where we're going to hunt for the day and head out in our separate ways. We've hunted together for somewhere around thirty years and know that we'll rendezvous at the truck somewhere between four and six hours later.

Weather conditions were pretty good as we departed, 20 degrees and a slight breeze with clear skies. The slight breeze lasted about a half an hour before it turned into a twenty mile an hour or more wind. The back of my neck or my cheeks were feeling like ice, depending on which way I was walking as I headed up the ridge. If this area was like most of the other areas I've hunted this year the birds would be high. I was right and after getting up about 2000 vertical feet, Jake started running into birds. The problem was, as soon as Jake would hit scent and point, the birds were diving off the top and sailing with the wind. In my experience, the wind seems to make chukars more flighty. I saw four covey's and I'm sure Jake saw more in the first two  and a half hours before the wind died down. I hadn't even got to shoulder my gun and was thinking this was going to be one of those days my vest would stay empty.

After the wind died, things suddenly turned in my favor. I had no idea how Greg was doing, because we were probably two or three miles apart by now with a couple of ridges between us. Once, I heard a far off shot and hoped it was Greg. Jake started nailing the covey's.  We were working great together and I shot unusually well, hitting my first five birds. I missed the sixth shot but was back on for the next two birds. What a great day I was having.

With my vest heavier than usual, we hunted our way back down towards the truck. Jake locked up again about 100 yards straight down the steep slope and I was heading down to him when it happened. Bam, I was flopping down the slope. I don't know if it was one of the thousands of rocks on the slope or a hole but my ankle gave out and I was down. I didn't think it was possible to twist an ankle with the stiffness of the boots I wear, but found I was wrong. I can't imagine what Jake was thinking as he was on point and I was wallowing around cussing. I finally got it together and called him off point. There was no way I was going to be able to get down to him on my ankle. Reluctantly he came back up the hill as about twenty birds flew off one or two at a time as if to taunt me even more.

Jake helped me gather up birds that had fallen from my vest while I gathered up the spent shells, water bottles and candy wrappers that had also scattered on the hill. My ankle was now throbbing and I started looking for the easiest route back to the truck. I was looking for a slope with as few rocks as possible and softer dirt material to help make my descent. 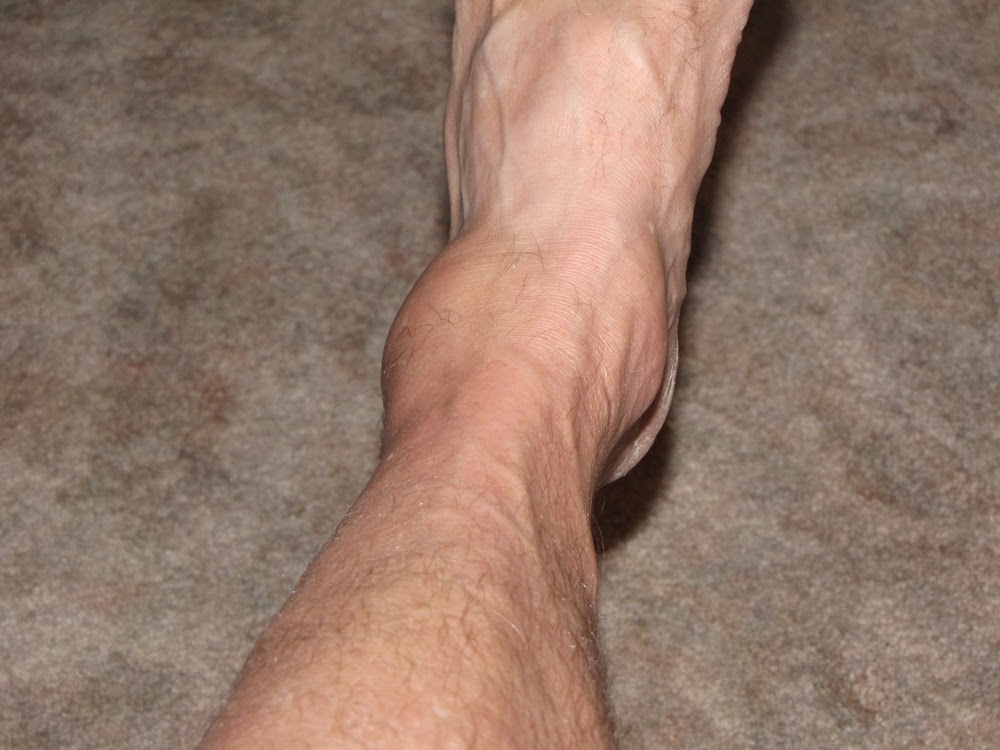 On the way down, Jake locked up again. He was in the right direction so I decided to hobble over to him. 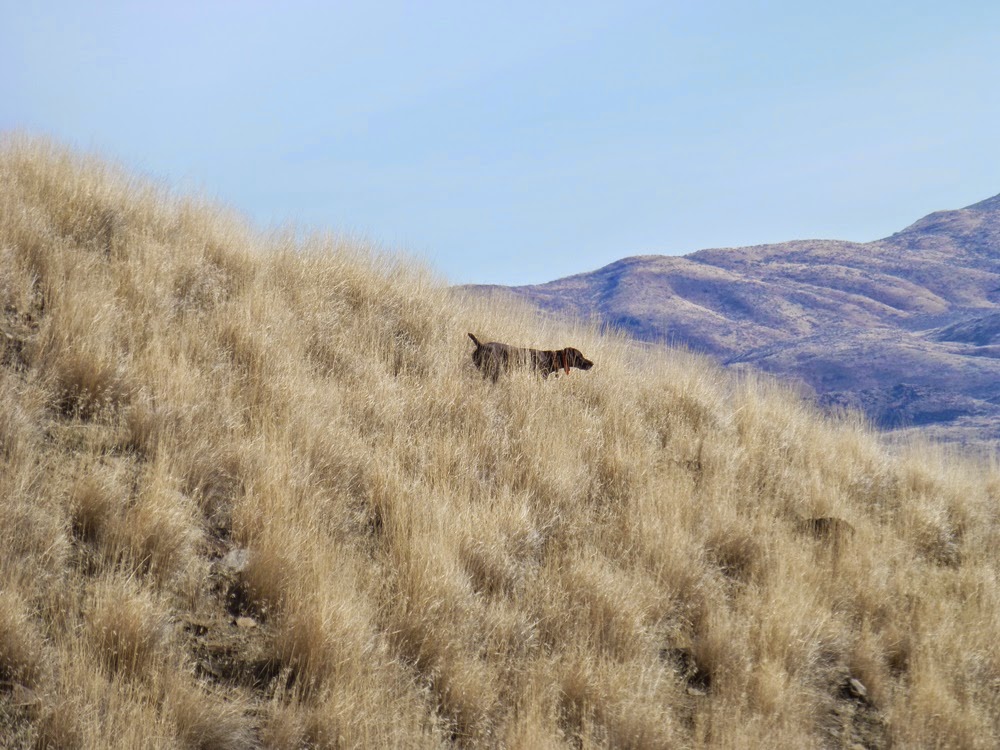 The single held tight and I finished off Jake's limit. Usually I would have been pretty happy. Eight birds with nine shots. What a day it had been, but I just wanted off the hill. 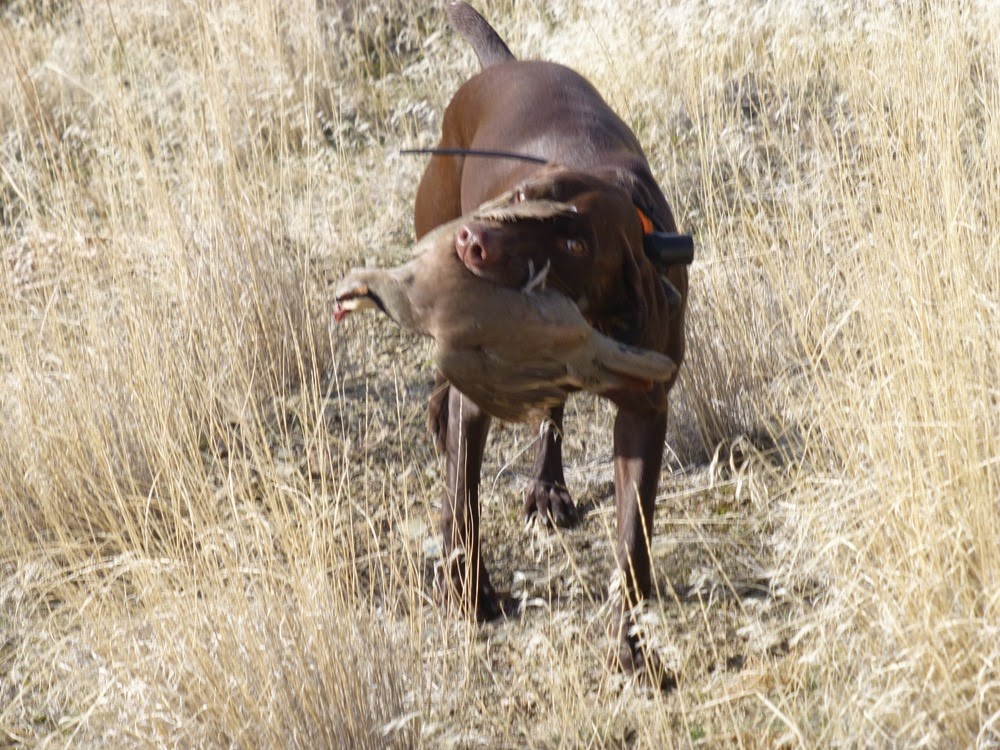 Greg, beat me back to his truck and his girls, Trudi and Katie were basking in the sun. We swapped stories and both had the same results, 8 for 9. This called for a tailgate photo. Getting limits has been rare the last two years, little alone both of us and shooting 16 for 18 just doesn't happen. We bragged on our dogs as Greg figured out how to use the self timer feature on my camera. 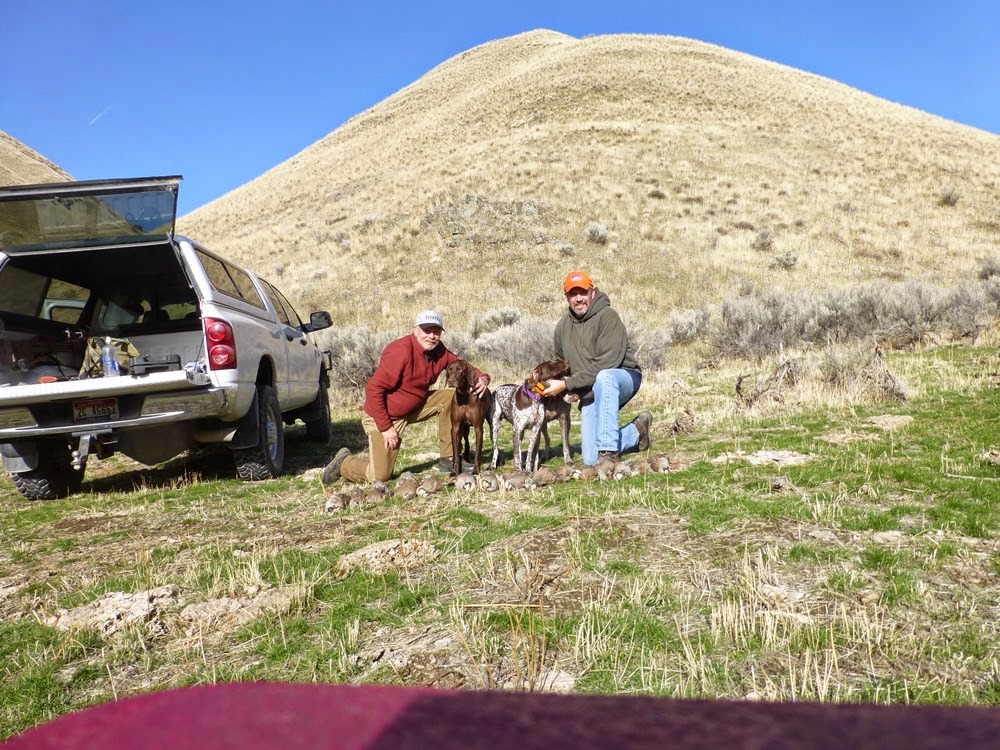 The only thing left to do now is figure out how to tape my ankle for support and also fit in my boot. The hill's are calling.
Posted by larry szurgot at 8:33 AM

Larry,
You had quite a day.One to remember. Those nasty falls seem to happen more often as we reach our" Golden Years." I can't say I have ever shot as well as you did. Congrats to both of you and to the dogs of course. Maybe Jake can pack some quick assembly crutches for you for the next trip. Hope you heal soon .Ask Barb if she has a remedy...on second thought maybe you better not. She might tell you to stay home.
Alan and Mays.

Thanks Alan and Mays.

I've had a few shooting days like that in the past. One in particular 8 for 8 day that was on an extremely difficult hill that always kicked my tail. I still have those 8 empties. I also remember the time I shot 19 straight times before hitting a chukar on the 20th shot.

You're right about the falling more often. I have to heal by Friday because I promised a gentleman a hunt that day. Icing it every two hours really helped, now if I can only chuk up a little.

Dang, Larry! What a bittersweet day. Your story about the ankle reminded me of a day three years ago (except I didn't get any birds to go with my messed up ankle). I hope you heal fast!

Wow. Sorry about the ankle but congrats on an awesome hunt. Things are still dry here in SoCal and chukar are nowehere to be found. I am tempted to drive to your neck of the woods for a couple days to remind me what chukar are all about...