Yes, the chukars are out there.

After sitting out opening day to watch Conner's football game, Jake and I had our opener yesterday. It was everything I could hope for. Plenty of birds and some very good dog work.

Our last two hikes around here found Jake chasing the quail some so I was wondering how he would do on the chukar. He didn't let me down. 15 minutes into the hunt Jake pointed our first covey of young birds. Never moving a muscle, he waited until I moved in front of him for the flush. 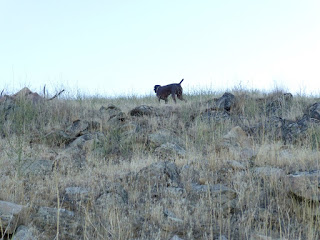 I picked out a bird and through the ashes of past dogs it fell to the ground. Jake was quickly on the bird and made his retrieve back up the hill. It obviously was early in the morning because the flash on my camera lit his eyes up. 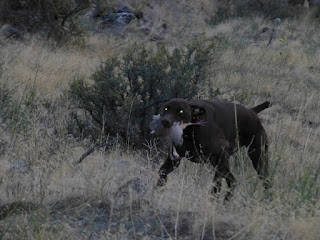 Shortly after this bird we found another covey and dropped our second bird from the ash and lead filled shell. At the retrieve we found a rock to sit on and show respect for past dog's. As in the past, they didn't let me down.

The rest of the morning hunt was with normal reloads and we saw more chukar's on our opener than we have seen in the past four years first time out. It looks like Jake and I are going to have an exciting year.
Posted by larry szurgot at 7:51 AM

Sounds like you had a great day in the field with Jake. Did you feel a year older after the hunt or is Jake keeping you in shape? Mays and I are so jealous!Have fun with your boy and be sure and have a big piece of pie for dinner after hunting all day . Great pictures by the way. I know Connor will be glad to hike up the points that are uphill
Alan and Mays

A nice tip of the hat for old friends. Well done.

Alan and Mays. We did have a great day and the hills did seem a little steeper but Jake found ways of making the journey fun.

Thank you David. It's nice to be able to just close your eyes and see your old friends again.

I am glad you had a great day! Nice tribute to your dogs!

I recently found a picture of my old friend Glacier on the computer. I printed an 8 x 10 and think of him often.

Annie and I have been hunting quite a bit. Bigger variety of birds this year - Ruffed, spruce and sharptail grouse; willow, rock and whitetailed ptarmigan, and a few snipe. Pretty day here today, 5 miles in the mountains after ptarmigan, but missed shots at the only covey we found.

We are headed south on our road trip in about a week. Looking forward to that!

Wow! What a great variety. How far south are you going?

We are going SD to visit our grandkids who recently moved there. Hope to hunt pheasants while there. I haven't hunted them since I left Idaho in '81. Then we are headed to Idaho to visit relatives and hunt chukar. Finally to Fresno where we are leaving the truck and trailer for the winter. May pass through OR and Nevada, but haven't hunted much in those states and may not have time this year. Hope to be in Idaho three weeks or so. Will probably camp at one of the Idaho Power campgrounds on the Snake part of the time around mid November. If you are over there we would like to meet you and Jake! !

We will make a point of coming by and meeting you. Let us know when you will be there. Sounds like a fun trip.

Glad to hear about the successful opener. We have only been out once on a very short hunt, but I am hopeful for the rest of the year based on what we saw.

Hope to catch up soon,