Today is Jake's birthday. He is three years old and is already a top dog on the mountain. With over 180 chukar hunts, another 15 or so grouse hunts, along with countless training jaunts in chukar country, he has seen and done most everything most dogs will do in a lifetime.

Yesterday we had an inch of new snow and with a prediction of four inches or so today we decided to have his birthday hunt a day early. Just like about every hunt this past month, he performed like a true champion. Yes, there were the times when he disappeared up the hill following running chukars and I saw fleeting glimpses of flying birds from his direction and could only imagine why they were flying, but that pretty much goes with this time of the year. Every dog I have owned has acted the same way on these late season snowy days. I don't know if the birds just refuse to hold or if the dog just gets too excited seeing them running on the snow and gives chase. Whatever the reason, I know that sooner or later I will get a point to walk in on. 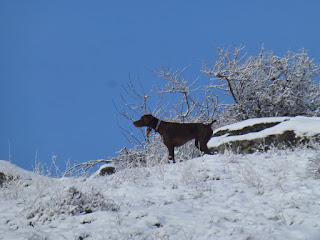 After his point, if I do my part, he loves the retrieve. He isn't a dog who retrieves to hand but will hunt dead bird until successful and bring it to my feet. If confused with where the dead bird is, he follows commands almost as good as a retriever. Yesterday, he even figured out how to get two birds in his mouth and retrieve them both to about twenty yards before he dropped one and brought the other to me. I owed it to him to at least walk down the hill to the dropped bird. I could have told him to fetch it but figured he had already done more than his share. 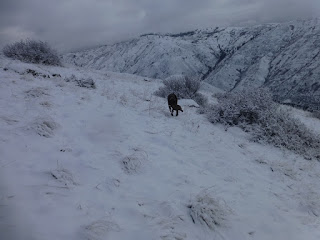 What amazes me about all pointing dogs is there pointing instinct. I have seen all different types of pointing positions. Some very uncomfortable looking, but they hold them just the same. Usually, those are the points you know that a bird  is there. Sometimes the perfect point is a false point but when they are caught in an odd position and freeze that way, I have learned to be ready for action. Take this long distance point. 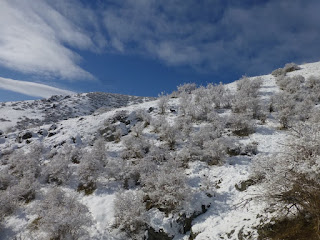 Over 100 yards later Jake was still in the same position. 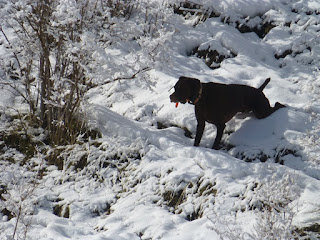 He stayed this way until I flushed the birds and than was proud to return the trophy to me. 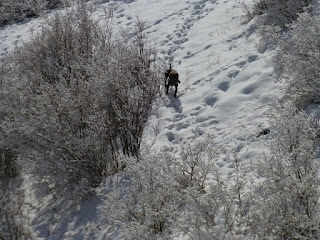 Although this wasn't a tough retrieve, I want to point out how much we should appreciate the retrieving of dead chukars. Although the pointing process is what we all love to see, it is the retrieving process that wears the dog out. Jake had two very long straight up hill retrieves that I could tell required a little down time and pick me up food. He covered over 25 miles to my 6 and 1/2 but those two retrieves had the most effect on him. I always make sure to show my appreciation for the retrieve because I know he is doing that for me, not for him.

Yesterday's hunt was also an eye opener for me. I thought maybe I excelled more than most people my age when it comes to chukar hunting. I thought because of my great dogs (just like every other dog owner feels) nobody could be pushed as hard as I do. Once again, I have been shown up. I took my side by side up a snow covered road that was impassable with full sized vehicles to gain 500 feet of elevation before Jake and I started our hunt. There had been no other traffic. I hunted for about three hours and for the first time this year ran into another hunter and his dog. We never got closer than a couple hundred yards or so but I knew he was being entertained by hearing occasional shots. Of course, I figured it must be some young punk and his dog. You'd have to be young to be up this mountain. After another couple of hours I made it back down to my side by side. I expected to see another atv or utv along the road but all I found were some boot tracks. I followed them down the road to the gate  at the main road. There was a truck parked there and a gentleman sitting in it getting warm. We discussed the days events and he informed me of the other hunters age. He was the same age as me. Not only did he walk the same hills as I did he also walked in 1 and 1/2 miles and was going to have to walk out that same distance along with gaining 500 feet in elevation that I didn't. So much for being a tough guy.

Anyhow, Happy Birthday Jake. Let's give this snow a day or two to melt and you can 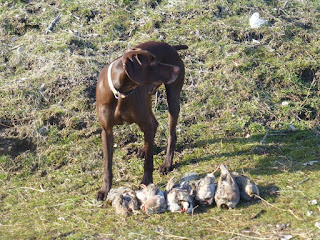 take me out for another work out.

Don't you feel bad for those dogs that hunt 5-6 days a year? That is like Roger Maris getting 20 at-bats a year.
I am in Wyoming for a one day chukar hunt. 300 miles one way. Because the dogs gave me that look.
Happy Birthday Jake.

You guys are quite a team!

Jake thanks you both. We celebrated with three candles on a cinnamon roll. His wish was for me to hurry and get those candles off the roll so he could scarf it down.

Jay, you're right about the practice. I've always been able to get plenty of hunts in a year, being within 200 miles of great bird country. Most of it within 100 miles. But being retired for the past three years also offers me a choice of picking the best days to go. You've heard the saying "birds train the dog", well in my case that is very true and my boys have seen hundreds every year. There is no one on this earth that could feel any more fortunate than me.

You've got a great bird dog because you are a great master.Mays says cinnamon rolls are the way to go as far as treats. Glad you are enjoying your hunting this year with your best friend. Enjoyed the pictures of Jake on point. You are a lucky man. Say hello to Barb.
Alan, Mays,and the Setter.

Great blog sir and even better looking dogs. im coming up to juntura area at the end of the season (first time in the area). Ive been trying to get up all year and finally am able to get free and ready to leave the heavy cover quail hunting of Northern Ca. Im doing a solo trip with my young brit. It will be his first chukar hunt. Any advice for this late season hunt would be greatly appreciated. We are coming up for 4 days 3 nights and hope to make the best of it. I would love to pick your brain a bit if possible. If you are willing please feel free to email me at jdaleolson@yahoo.com. Thanks alot for your time and a well written blog.

Larry, you are a stud, even if there's another guy crazier than you! I'm younger than you but am sure couldn't keep up. Great to see what the human body can do (something to aspire to, for me). Thanks for the great report.