End is getting near

Seems like this time of the year there are several scenario's from chukar hunters out there. There's one scenario that says the birds were hit hard by these last three cold weeks and hunters can't find birds, while another one says that the weather has been so bad that the birds are congregated in the low lands and too easy to slaughter. I even heard some complaints from some that the hatch was poor again this year and the numbers never were there. Some say the birds are just too wild this time of the year and put their dog's and gun's away. My thought's say there are plenty of birds out there for both hunting and brood stock for next year, but they take some humping to get.

I've never been one to down play chukar numbers, even on the low number years. Hunter's have little effects on chukar survival. Nature is the main culprit in determining the yearly outcome of the birds. Even though I'm sure that in some area's the cold weather might have had some effect on chukar survival, most of the areas I hunt have fared well. I can honestly say that I haven't seen many birds on the roads driving into my different hunting areas, but I don't spend enough time on them to give an honest opinion of how many birds are down that low. You have to be there to give an honest opinion.

My expertise comes with the latter scenario. The one that takes humping the mountain. Expertise doesn't mean success, it just means what I have done for year after year. It has worked for me through all of the years and always has given me chukars to CHASE. Sometimes the success isn't very good, but I'm still out there doing what I and my dog love to do. Matt Hutt, a much younger chukar hunter than I, pointed out the fact that he also hunts a lot like I do and that the small chukar hunter brain is born into a person and you don't have to get old to lose the smarts of a normal person.

I probably don't hunt any harder than the hunters that hunt lower on the mountain, and there's a good chance I don't see more birds but it works for me. Besides, that's where Jake likes to go. With the weather warming some, there is a lot more open ground now and it is finally softening up to get a foot hold. About a week ago I was getting so beat up by the deep snow and frozen ground I was about to give it up for the year. I thought that maybe age was catching up with me. Luckily for me, Jake made me give it some more tries, and with the ground letting me get a foot hold, I'm able to cover more ground and feeling a lot better chasing the birds. Yes, the birds are pretty savvy now and hard to hold, but every once in a while you can get a covey or single to hold, especially when they are between you and the dog. 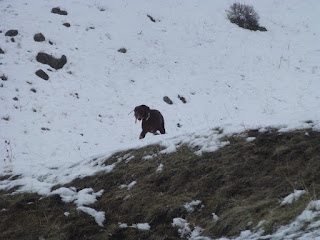 Trust me, there will be no more humping this kind of country for me. 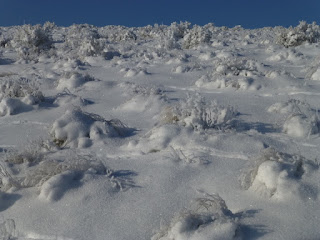 There is a lot of open country out there that holds plenty of birds. Most of them require some long distance work, but they are still doable. 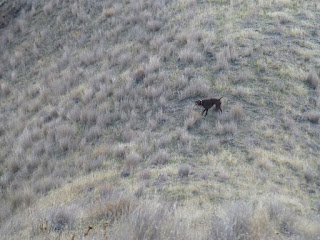 There is no one way to hunt that is better than others. Maybe someday I'll hunt those lower areas closer to the road and find those birds. I'll probably find out it's a lot harder than I thought and maybe find that honey hole. But, no matter where it is I know I'll have a chance of getting some chukar because there are more out there than some would have you believe. I know I'll never have the chance of seeing the young mountain lion I saw yesterday without being out there doing it. I'll also not have a chance for a successful day to make up for those days of humping over snow covered mountains just to see the birds flush wild without getting out there and doing it. 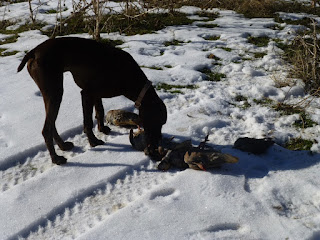 A P.S. to my last post Forest Gump. I still qualify for the "stupid is as stupid does" chukar award. I mentioned, how I was crippling birds and Jake had to chase them forever. Even though I clean my gun after every hunt, I take my chokes out and clean the threads every fourth hunt or so. I had four hunts with no choke in. Amazing how the shooting improved after putting my modified's back in.

Posted by larry szurgot at 9:14 AM