Before getting into my early chukar prediction I'd like to address an issue that I'm hearing more about every day. That's the issue on the land transfer. If there is anything we can really do to keep our chukar hunting good it is to make sure we have public land to hunt. We lose that and we won't have to worry about the chukar counts anymore. I'm not real savvy on that type stuff but I'm sure most of you are aware of what you need to do to keep our hunting grounds public.

Next, although it was a tough winter, it wasn't as bad as it could have been. Every once in a while Ma Nature decides to do some culling and I believe this was one of those once in a while's. A great example happened at my front door this year. For the past ten years the white tail have chased the mulies from there wintering grounds around here and we have about thirty white tail and forty elk that feed on our place. Two of these white tail were runts. Although Barb and I tried and get them food the other deer always chased them off. The other deer would go out of their way to chase them away even when they weren't eating in proximity to them. Well as you might guess, the two runts died. That was even before the big snow came. After January, the animals all left because the snow was too deep here. This was the first January in 21 years we haven't had deer and elk feeding in our front yard. Now that the snow is receding they are gradually coming back.

So what's that mean to the chukar population? Not a darn thing, but I felt compelled to tell this story since I had so much junk shoved in my face about harassing big game animals while chukar hunting. If we use are heads things usually turn out the way they are supposed to. I don't know one chukar hunter that hasn't the brains to avoid wintering game animals when hunting and if there are some I don't care to know them. In fact I trust that almost all outdoor enthusiasts (horn hunters, snow mobilers, hikers, etc.) are aware of their responsibility when it comes to avoiding game animals.
Closing the chukar season or any other activity would have not have had any affect on winter wildlife survival except in those area's that the Fish and Game are already aware of and they do put closures on them. If someone wants to help save a deer, go patrol the road between Horseshoe Bend and Emmett. I've seen more dead deer and deer standing on that road than ever before.

Be careful before you trust my opinion of it being okay for you to go up on the mountain because you might end up being classified as a unethical hunter. I only bring this up because my post back on Jan. 1 was the most read, the most commented on, and the most phone calls of any post I ever made. I don't want to go that route to hear from other chukar hunters but it was great hearing all the different opinions.

Now to my very early chukar predictions for 2017. I've never made a prediction this early in the year but I've never seen as many birds this time of the year. Remember, I don't know any more than any of you, so it's still finger crossing time. Some will say it's because there was very little hunting in January but I think it was the lack of predation. The avian predators were taking many chukar/hun early in January but later in the month I was seeing very few predators chasing birds but filling up on the dead carcasses of big game animals on the frozen ice or side of the roads. I even saw two golden eagles, one red tail hawk, and a three other type of hawks hit on the road next to carcasses.

Although I did see some chukar in January that looked pretty weak and didn't want to get off the road, they were few in number compared to the healthy birds I saw.

Jake and I have been in the hills 8 times this month and we're finding birds that fly and run as good as birds we were hunting in November. Surprisingly we are already seeing lot's of pairs. We are seeing very few huns but that is normal for the spots we go. We are able to cover a lot of ground now and the training opportunities are endless. 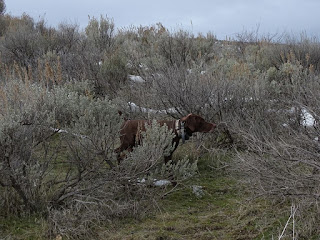 We even get some practice shooting with the camera. 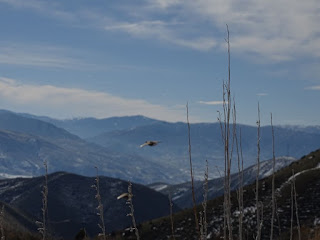 So the winter wasn't as bad on the birds as many thought it might be. I'm looking at it as an optimist for now and am hoping for an "I told you so" come September. A normal spring should give us the best year this century. You can either believe that or believe those that think this winter set us back five years. Either way there's nothing we can do about it. When it comes to chukar, Ma Nature controls the variables. About 212 more days and counting.
Posted by larry szurgot at 3:27 PM

Larry....thanks for your reminder of the importance of public lands to upland bird hunters. I just got back from 2.5 months hunting quail in AZ....100% on public land that some politicians want to give to corporations and the wealthy such as the Wilkes Brothers who have bought several hundred thousand acres of Montana that surround....and prohibit access to the public lands they surround. And the latest effort by some politicans to sell 3.3 million acres of lands the BLM has said are "surplus". They are only good for chukar hunters?

On a brighter note, quail in AZ resulted in a lot of shots fired, a lot of oak trees trimmed of excess limbs, and a few quail feathers in my vest. They are getting winter rains that may help give a bounce to the desert quail....gambels and scalies.....that have been struggling due to drought the past several years. Texas has a bounty year on bobwhite and New Mexico had great scalie populations. Like you said, nature rules the game.

Also on dog exercise.....very timely. In AZ, most of the hunters I connect with are really into working their dogs at home and continuing in AZ. Torn tendons, etc are rare. However, some snakes, javalina, seeds, spines, worn pads, barb wire tears, and valley fever keep moving a lot of money between hunters and vets. Another subject is lost dogs.....many dogs lost this year...some had no ID on the collars nor chips.

Great to hear from you Greg. Have another friend who spent some time in NM and outside of fighting some heat sounds like he had a great time also.

Lost dogs. Wow! I can't even imagine how hard that would be to live with. The cost of chipping and a collar are well worth the suffering prevented that a lost dog and owner could go through.

We're starting to see lot's of bare ground and the big game animals and birds seemed to have endured pretty well in the areas I have been to. We're all looking forward to a fun spring.

Keep in touch and good hunting,
Larry and Jake

Larry, thanks for a refreshing blog to read. I used to lurk sites like some of the gun dog bulletin boards but they seem to of been over run by non hunters that just happen to own a hunting breed. The Upland Journal site looks to actually be harboring anti bird hunting people who have nothing better to do but criticize true hunters. No wonder that some of these sites have seen an exodus of true hunters.

Thanks Larry. I am already excited about next season! August 10 in AK! Saw my first covey of Bobwhite Quail this morning in the Texas panhandle. Fun!

Hi, Craig here. Your site will only let me post as "anonymous" but anyway, I do want to concur with another poster about the bird hunting forums seemingly overtaken by either non or very lightweight hunters who have nothing better to do than act like watchdogs over hard core bird hunters, what they hunt, when they hunt and where they hunt. Sites like GunDog Forum with its absolute worst moderator in the history of the internet "Ezzy" and the Upland Journal site with their pansy puss footin' mod-administrator have done nothing to enhance and promote the sport of bird hunting, but they sure have created a comfortable home for the poseurs and pretenders. Thank goodness blogs like yours tell it like it is and give all, especially the real deal bird chasers a true forum to express our thoughts and fight over our disagreements.. Thank you for that.