After my scouting outing on Aug. 1st, I was excited about the upcoming season but my last three trips lowered my expectations once again. Although I'm finding birds once again, they are not in the numbers I hoped to find. I've found covey's of both chukars and huns but the chick count has been lower than my expectations. Almost every covey has been from the early hatch with almost grown chicks. The largest covey had seven young birds while a couple of groups only had two or three chicks.

I have to use the excuse of tough scouting conditions much like early hunting season. Jake very seldom finds the birds this time of the year with a high heads up point but rather hits the scent and than tracks them as he would a wounded bird. When he gets his nose close to the ground I wait and either he bumps a covey or gives me a point. Usually he just bumps them making it hard to get a picture.

What's baffling me is first of all, the number of paired birds I found this March. I was sure there would be covey's of birds everywhere this time of the year. Secondly, the great spring we had. Not too cold and enough moisture to keep the insects coming. I can't count the number of grasshoppers that have hit me in the face while scouting this year. Thirdly, the number of chicks the turkey's produced this year. There were successful hatches everywhere and most of the groups averaged more than 12 chicks per group. Although they hatch earlier than the chukars the conditions were pretty much the same.

I visited with a rancher last week and he pretty much echoed what I just said. Although he was seeing birds while riding he hasn't had any of those large covey's that take off with so much noise it spooks both him and the horse.

The grouse I am encountering also have small chick ratio's. The most chick's I've seen on Blue grouse is five and 3 on Rough grouse. The Rough grouse are hard to count because of where they usually are and there is usually more noise than what three chicks and an adult can make but I only count what I see. Quail still aren't showing up like I expect but I have neighbors that say they are seeing bumble bee sized quail now.

I'm still confident that we are going to have a good year but maybe not the stellar year I predicted clear back in March. It's very possible that Jake and I are just not covering the hills right and if we would have zigged instead of zagged we would have found more birds. Cooler, wet weather and the season after Sept. 16 will provide the answer for the huns and chukars while cooler conditions and some rains will be a good excuse to chase some grouse after the 30th of this month.

Jake and I will still be getting out because that's what we love to do. We will try and keep you informed of any progress and excited for the upcoming season and I hope that the rest of you will keep reporting what you are finding out there.

On the lighter side, if I ever get tired of hunting chukars, Conner will teach me how to fish work out style.
The hook up, 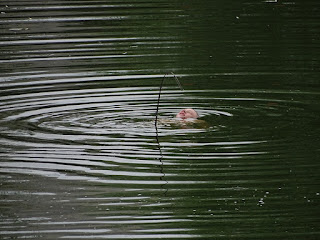 Dragging around the pond 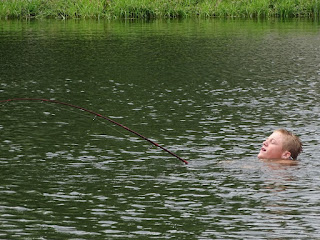 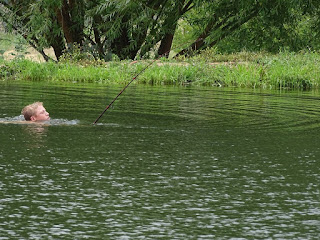 Hands on the fish finally 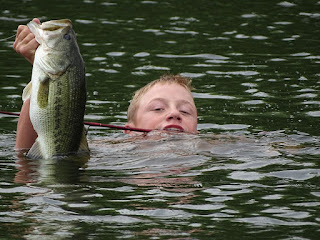 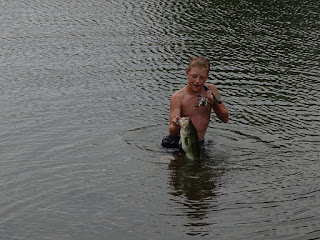 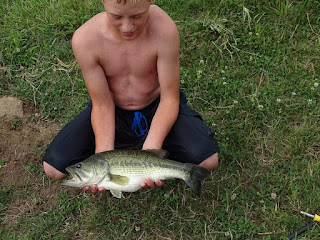 Posted by larry szurgot at 7:38 PM

Thanks for the report Larry! Bird season opened here the 10th. Lots of rain so far. Annie and I got a couple spruce grouse one afternoon. She really enjoyed getting feathers in her mouth again. Well timed beeps on the electric collar brought them right to hand. Otherwise she has a tendency to drop the bird about 10 feet away and then looks at me for several minutes before finally bringing it the rest of the way.

We need some clear weather to hunt ptarmigan. It will probably be wet no matter what though.

Conner is taking 'follow the fish' to new levels! That is a nice bass! Glad you two are having a great time as usual. Two of my grandgirls are here from SD. One asks every day 'when are we going fishing'. They won't be swimming in these waters, but hope to get out soon.

Larry, thanks for sharing even though it was a little dissappointing.

I have not made it up to the.chukar hills yet, so I can't give an update there. I have spent a lot of time at my brothers farm in Eastern Oregon. We have only owned the farm for3 summers now. I can say without a doubt there are more chicks on that farm this year than in the previous two years combined. That being said every oheasant chick I have seen this year has been within 4 miles of that farm. The other thing is we continue to increase prime pheasant cover on that farm and winters most of the birds in the area in our food plots.

I have had a theory this year that the Chula population would be spotty. Some areas with good birds and some with bad. I had an employee who lives in a community North of Boise and they reported hail on June 6. If the areas you are scouting are in that hail area then the will have fewer birds. If that is he area your scouting your observations would be consistent with that report. That is successful brood getting of the nest. Then getting caught in a hailstorm. Killing some.of the birds in the brood, but leaving a smaller brood size. If your scouting in those areas that would make sense. On the flip side, I continue to hear good reports out of a couple of areas. I am happy to.discuss those specifics off line if you want. You can message me through Facebook if needed.

Thanks for the offer David, but I'll let your post do what I am trying to do, keep people informed and excited about the upcoming season. Posts like yours and chukarhunter50 help to balance out my counts. I have gotten several calls and emails from people who I respect their opinion saying they are seeing many more birds than I am and I believe Jake and are not scouting this year like we have in the past. Since making my early predictions this year I've been out twice as much as almost any other scouting season trying to prove a point and have been pretty unsuccessful at doing it. We've covered a lot more road miles and less foot miles due to the temps and I think my counts show that.

I truly believe there are a lot more birds out there than I am seeing and when I get my stuff together and we start hunting I am going to be shocked at how many birds I've been missing this summer.

Larry, good to hear you are out shooting some birds. I'm hoping Jake and I can meet you this hunting season.

Larry,
I'm new to your blog but have been reading your past posts and really enjoy the information and stories. I did hear word of good numbers along the Oregan Idaho boarder but don't make it that far to often. Over in the Magic Valley area where I'm at I have seen very good numbers of huns but haven't made it out for chukars yet.