Jake and I had a pretty good outing today and although it wasn't quite as good as chukarhunter50 had a few days ago, it made me pretty excited. If you really want to get jacked up about this years upcoming chukar season, look at chukarhunter50's last comment on my "ouch" post. If that doesn't get a person fired up what I found today will put you to sleep.

To start out, the area I scouted was inaccessible once the winter storms hit last year. Maybe a snow mobile could have gotten there but the grade a person had to go over was too covered with snow to get any kind of a wheeled vehicle in. I questioned that many birds would survive up there because of the deep snow last year but was pleasingly surprised shortly after I started up the grade and saw 53 chukars running up the road ahead of me. I know there was 53 because I got a great picture of them and have counted them several times. I'd show this picture except for a prominent feature in the background that would give this location away. I'll give you a hint on the location. It was in Idaho.

The covey had at least two different size chicks. Some were around three weeks old and most of them were closer to eight weeks old. I was surprised how many of the big chicks I saw. There goes my theory of most chukars are hatched later in the summer. I got plenty of pictures of those birds and several other birds further into the trip but bare with the quality because I was using a little camera with no view finder and my eyes aren't good enough to see the screen on the back of it. So the pictures are a true point and shoot situation and hope that the image is even in the screen. Kind of like my shotgun shooting.

I did see one more small covey from the road and snapped this picture as I passed. 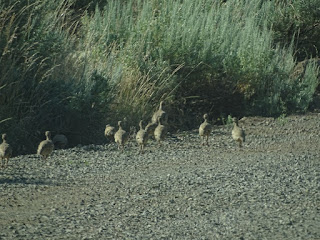 Jake and I took two hikes but didn't get that far out because of the dry conditions. He was constantly sneezing and shaking his head but he was finding so many birds I think he would have kept going until he dropped dead. So against his wishes I would turn him and head back to the truck. This was a large covey of about 40 birds but somehow I managed to only capture three in the photo. 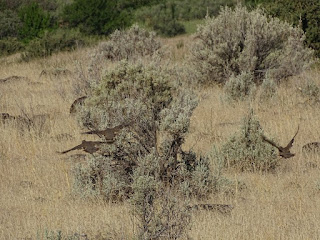 Being young, a lot of the chukars ran ahead and would pause for a shot but most of the time my camera only got pictures of brush. 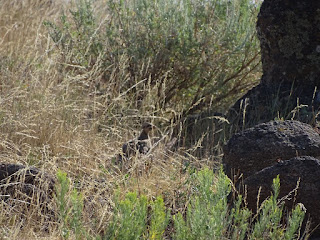 I had a little better luck getting a focused shot against the sky. 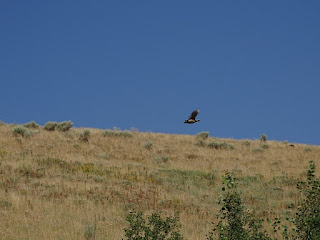 Jake had some great wildlife viewing on many of the running birds and would stop and stare so that I could tell he saw birds. The conditions are so dry and the scent is minimal enough that Jake often times found the birds quite close. 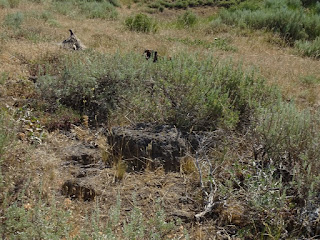 Summing the day up, I'd have to use the word fantastic. After my last few outings, I have been getting a little worried. Today brought me back to reality and how tough these chukars are. They survived this hard winter and now it looks like they are flourishing again due to a wet spring. Outside of the large covey and the small covey on the road I know we saw at least 6 other covey's. We saw between 150 and 200 chukars and I'd guess around 90% of them were juveniles.

To top it off, we saw two covey of quail on our drive out. One covey, the chicks were about 2/3 the size of the adults and the second, the chicks were a week old at the oldest. No pictures because they totally disappear in the cheat.

I am back to being very optimistic about the season. I am looking forward to a good rain storm without the lightning soon. The cheat is terrible and tall.  I pulled several seeds from Jake's ears and luckily he doesn't seem to have any up his nose. The birds have plenty of cover to elude us next fall.

Grouse season is 29 days away and if the heat ever leaves it will be great practice for chukar season.
Posted by larry szurgot at 2:28 PM

Loving the positive news from comments as well as this most recent post! Northern Utah had a similar weather pattern all winter and spring and I have been worried as well. Haven't made it out for chukar counts yet but this last weekend took a hike to a favorite grouse location and was pleasantly surprised. Saw more birds than ever before...they just kept coming out of the tall grass and brush where they were feeding on hoppers in the early morning sun. The dog was having so much fun I guess he couldn't contain himself and he went and got his leg all cut up (healing well). We'll be back out in the hills soon for more counts.

Seriously, I am jonesing for a new report.