All might not be lost in those down areas.

Wow, it's been an exciting opening week to the chukar season. Day one; birds galore, Day two; rain all day and saw only five chukars, today; perfect weather and saw lot's of birds again but they were very young.

Although each hunting place was different, Jake and I spent about 4 to 5 hours on each hunt, I went about 6 miles each day and Jake averaged 19. Today was an elevation gain of 1400 ft. and opening day was almost 2000. That's a pretty good day for me.

I got a new camera after my first hunt and had great plans of taking some good action shots. Didn't happen. I did get some pictures of Jake pointing some of the young birds 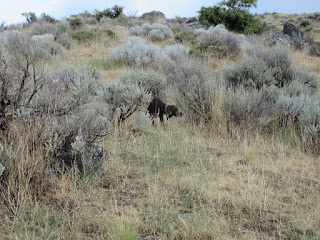 and retrieving when I shot well, which hasn't happened too much this year. 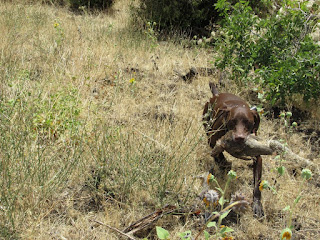 So much for showing off Jake. What have I learned this week. I think there are going to be more birds out than the predictions from Oregon and Idaho game departments. Some of the birds I found today were so young that they wouldn't have been able to fly 4 weeks ago thus being pretty hard to count. I raised chukars a few years and am pretty good at telling about how old they are when they're not flying. So I decided to shoot one of the young birds from a covey Jake pointed. I was shocked to see that this bird was 6 weeks old at the most and probably closer to 5. 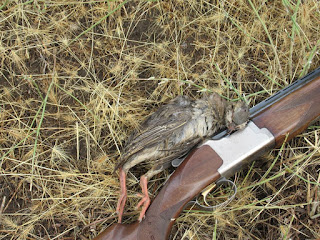 The good news is that I saw four different covey's of chukars about this age. They were all fairly large covey's, around 20 birds, and only flew about 100 yards before setting down. I did see some larger birds but those covey's had less than ten birds in them. Seems in this area the early hatch might have suffered some loss and the second hatch was pretty good.

In the area I hunted on the opener all of the birds I shot were this years but fully colored. I shot a few of those birds today but the number of fully colored birds compared to the little one I shot was maybe 25%.

So don't let those reports get you down yet and don't let my optimism get you too excited, just get your partner out there and find out for yourself.
Posted by larry szurgot at 6:51 PM

I'm having a hard time finding a replacement for my Tri Tronics upland special, can I ask what collar you are using in the picture at the top of your webpage? Any tips would be great as I've tried three other collars (two garmin, one dogtra), and haven't been impressed so far.

I just found your blog and have really enjoyed your posts. I was wondering what type of dogs you have in the pics..they are beautiful! I have a 3 year old German shorthair/wirehair mix and have only hunted him for quail and pheasant...I am looking forward to chasing some chukar. I see you live in Horshoe Bend...I used to live in Nampa and have hunted HB and Weiser many times. I now live in Northern CA and and the season is late starting Oct 14rh! I hope the weather cooperates!

Cale, that picture was about twenty years ago and I believe it was a tri tronics. I've been using a dogtra 2002 T&B for the past 12 years and have had no problems with them at all.

Dave, they are German Shorthairs. Quite often people get them confused because of their solid liver color. Good luck on your opener down there.