Heat, Pollen and dust, OH MY.

The upland season did arrive. There wasn't much hoopla about it, but some of us were eager enough to give it a try. I think everyone survived, but a post I received as well as my opening day outing suggest that I might remind upland hunters of some of the potential threats to us and our hunting canines on these very warm days.

First of all, the post I received from Steve told me how he was sidelined after his first hunt by an asthma attack and was hospitalized and put in a medically induced coma. I'm not sure whether he already had asthma conditions that might have led up to his hospitalization or whether it just came on but I know this heat, dust, smoke and pollen can knock a guy down real quick. I'm hoping that's why I was so punky on opening morning. I just couldn't get going. You'd think with finding grouse five minutes from my truck the enthusiasm would have had me pumped up but, within a half hour I felt like my pack weighed 100 pounds. Even when Jake busted or pointed another bird I felt drained and it was now only 8 A.M. I refuse to think I'm getting to old so I'm going to blame it on the weather and air conditions.

If you're like me, you'll go out there anyway. Just be prepared and pack lots of water and snacks to help you make it through the hunt. Slow yourself down along with your hunting companion and make it a short trip.

Speaking of hunting companions, keep a close eye on your pup. I remember something about a hot pheasant opener in the Dakota's and stories of many dogs dying of heat exhaustion. Watching Jake last Thursday, I could see how that could happen very easily. He drank a gallon of water in an hour. That's a lot of water, but he kept coming back to me and staring at my water bottle and I'd squirt more into his mouth. All of my dogs in the past would lay in a bog or puddle of water and cool down but Jake hasn't figured this out so he doesn't cool himself down. We were at about 5500 feet in elevation and in an area where a creek would perk out of the ground for 50 yards or so once in a while. Jake wouldn't use the creek but I'd refill his bottles when I could. His nose was so dry he didn't get that cake of dust and pollen over it like on normal early hunts. The worst part, (if you can call this bad) was there were enough birds around to keep his enthusiasm up and he refused to slow down. I finally had to convince him to cut our hunt short when I saw him stumbling a little. 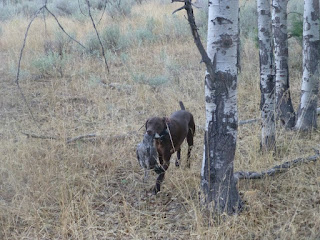 I know it's hard not to get out there and chase birds, since you've been waiting since January 31st or before. Just beware of the heat, dust and pollen. First, it may affect you more than you realize and second, it will defiantly affect your dog. A heat stroke and do permanent damage to a dog. I don't know a lot about systems of dogs overheating but I do know to check there tongues. The darker they get, the closer to heat stroke they are getting. I hunted with a friend one time that when I caught up to him he was telling me his dog was very disoriented. Her tongue was almost purple. I poured what water I had left on her stomach and we then carried her to a creek and place her belly down in it. We didn't lose her but she was never the same hunting dog again.

Enough on the negatives. Just be careful and smart out there. There are defiinately birds out there to be had. They are tough to find because of the poor scenting conditions but if you can find birds on these hot and dry days it's only going to get better from here.
Posted by larry szurgot at 4:59 PM

Stumbling is no bueno – you've let it go too far if you get to that point. Heat stroke ramps up fast and you must take action immediately if you get past the tipping point (there is a tipping point). Primary remedy is to bring the core temperature down rapidly – fully immersing the dog in a deep, cool stream is ideal. (In my worst experience, I was lucky enough to find such a stream as I careened down the mountain in my truck with the dog expiring on the seat behind me. I plunged into the stream with my dog and held him there for a long, long time. He made it without any residual effects.). And sugar – I carry packets of honey like they have in restaurants. A couple of those, once the core temperature has been brought down and the dog is stabilized, really help the dog perk up. (Don't worry, they'll eat it.)

Thanks Daniel. Great information and warning to those who go out on these early hunts. I carry honey packets also along with some applesauce for some extra perk along the way. Jake loves it and let's me squirt it into his mouth.

Ouch. Oregon chukar forecast is bleak in the eastern part of the state. Here's to hoping there is a few honey holes in the chukar heaven of eastern Oregon.

I was over in eastern Oregon about three weeks ago and although I didn't see as many birds as I would have liked (a covey over each knob) my opinion is that it is better than their forecast. I didn't see many birds from the road but some short hikes produced birds.