I spent the last five days camping and hunting in chukar country and it was the best trip I've had for years. It wasn't as much the birds or even Jake that made the trip so special but people. I remember 40 years ago when everyone you saw on the road or trail always had a friendly smile and wave. Everyone would stop and chat a while and exchange information. For the most part those days have changed. We have turned into a "it's all about me" society.

But last week was the way it used to be. Shortly after I got camp set up I took a scouting run to decide where I would hunt the following morning and ran into a gentleman coming off the hill. We visited for a while and admired each others dogs. When he saw Jake's name on his collar he exclaimed "hey, you're the guy with the blog". He had already been hunting for several days and readily passed along information of what he was finding. Jeff was from Hawaii and was going to be traveling through several states upland hunting until sometime in February. Although my life ain't too bad I still envy him. He'd been coming over to these parts for many years and was a book of information of the area.

The next morning I unloaded my side by side to take up the road and the left front tire was going flat. I loaded it back up and started the long walk I was hoping to avoid. After about a half hour or so, two guys were headed up the road and saw me hunting. They stopped when they saw me hunting the ridge and asked if I was having problems. They were wondering why the side by side was in the truck and I explained about the tire. Mike pulled out a can of fix a flat and said "try this". We introduced ourselves and as soon as they saw the name on Jake's collar Troy said "hey, you're the guy with the blog". Seems like everyone knows Jake and finally puts me together with him as a side kick. Mike and Troy had traveled over from Bakersfield, California and have been making the trip for something like 15 or 20 years. They, too, were a wealth of information. I even got to watch their dog's work a little from a distance. Troy had a wirehair and Mike had a pair of pointing labs and they were great to watch work. 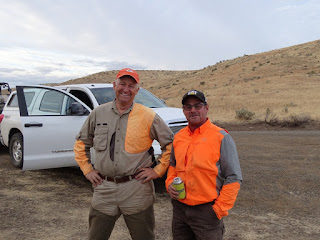 They went on their way and I continued my hunt. When I got back to my camp I filled the tire with the fix a flat and noticed it still leaked a little air. It wasn't long before Troy and Mike pulled up to my camp on their way back to town. When Mike saw my tire was still leaking some he pulled out a tire patch kit and suggested we try it. Before I could even think about doing the work Mike had it done for me. We swapped some more tales and Mike said he'd bring me back a can of fix a flat and a repair kit the following morning if I wanted. I gave him some money to replace what I had used of his and some for what he was going to buy me. The following morning I found this on my sxs. 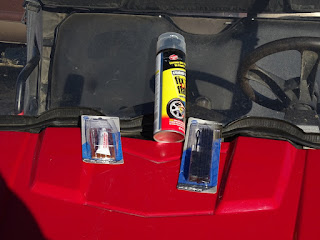 He had also left half of the money I gave him. I guess he felt like the material I used of his wasn't worth anything. Not often do you find that. On their way out that evening they stopped to  say good bye as they would be returning to California the next day. What a couple of great guys.

Shortly after they left, three guys stopped by my camp and reflected upon me giving them a ride last year in the same area. Their names slip past me but I remember they had some fine brittanies last year and added a poodle pointer to their team this year. We swapped information about our hunts and bid farewell.

They had no more left when another truck pulled up to visit. Another guy with a wealth of information. I had heard of Jeff Funke before but never met him. He is a local Wirehair breeder and as fate would have it, Troy from California had one of his dog's and Jeff from Hawaii also had one. What are the odds.

I've camped in that location at least a half dozen times and until this year the only person that ever stopped and visited was the rancher that runs his cattle there. Yes, it was like the good ol days.

As for the hunting, it was pretty good also. I saw more huns than I have ever seen there but maybe a few less chukars than usual. 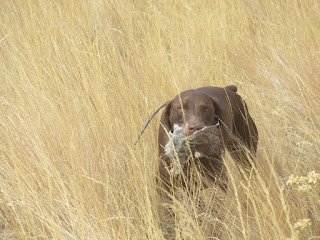 The wind was a little stiff at times but it produced several of these over the ridge points which made for some good shooting opportunities. 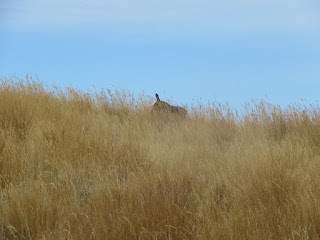 This was our best day in Idaho. 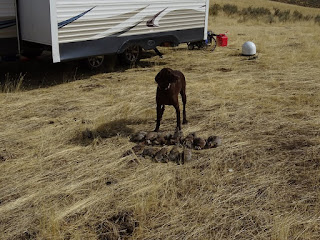 Jake and I also had this visitor on one of the hunts. He seemed to feel that we weren't much of a threat and stayed within 100 yards for close to five minutes before ambling off. 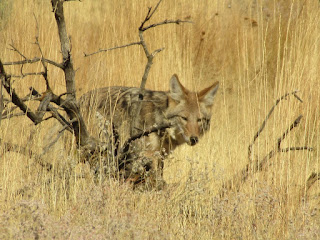 Not all was good though. Our trip to Oregon was a little discouraging. One of the spots I scouted this spring and saw plenty of birds produced a big goose egg for finds. It's one of my favorite hunts and I hope it isn't indicative of the rest of the area's.
Posted by larry szurgot at 1:40 PM

This is the first year I've hunted in Oregon. Saturdays opener was a goose age for me 7 miles 4 hours one covey one missed shot. Not a good start today was almost the same but one covey 2 shots 2 birds. Good news was I got into a big group of sage grouse nice to see them even though I cant shoot them. I will try another aria Wednesday or Thursday. I have to go to town tomorrow and pick up to meds for one of my dogs he blue out his knew ACL surgery in Feb. Big expense for a old retired guy like me but dogs first. Some people ask me why do you have 4 Dogs? This will answer the question one missed season at my age is not a option. This is my passion. Sounds like Larry you are having a great time. Our opener in Nevada starts Saturday and the Guys I have Hunted with the last 20 years will be here always a great time. James T

I really enjoyed the week and it was a genuine pleasure to meet you Larry (and Jake). I was inspired by your conditioning and motivation to hunt our favorite game bird. I hope to get together next time I am up your way!

James T. Sorry your first trip to Oregon hasn't gone well. Usually eastern Oregon has some fantastic hunting but this truly may be one of those down years. I hope your trip Wed. or Thur. proves different. Let me know. I'd sure like to hear a positive report from Oregon since I haven't got many.

Troy, let me know when you're this way again. You guys are great to swap stories with.

Larry, I hunted my favorite spot in Eastern Oregon opening day. I got there just before legal shooting hours and was excited that I was the only vehicle in sight. My dog found one covey of about a dozen chukar, and I shot a double. Spent a few more hours and didn't find any more birds. I ran into another hunter when I went down to the river to let Callie (my dog) cool off. He didn't see or hear any chukar. On my way back up the hill to my rig I had to detour twice for two groups of two hunters each. No shots fired from either of those groups. I came back to my rig with two other vehicles parked right next to me! Anyways, I would see anywhere from 100-200 birds in a day at this spot last year. It was really dry and no green anything for the birds to eat.

I spent 7 days bear and elk hunting from cottonwood creek idaho side, south of brownlee dam to hells canyon dam. I took a Break from Chukar. I saw 0 chukar, 0 huns, heard 0 chukar in the AM or while hiking, and saw 16 deer, 1 mountain goat and put on about 40+ miles on my legs and 15000+ vertical all in previously good chukar country. I saw more grouse than anything. But I did get an elk. Im home and the Dogs want to run, so I'll get back to the chukar. Also had friends that hunted Oregon, extremely poor reports from areas that held alot of birds last year. That area you hunted on this trip is where I was opening week and the chukar were in decent numbers then which bodes well for next year. Hope some of them expand to vacant canyons to the north. Mark