When I speak of the learning curve, I'm not talking about dogs but the human curve. When it comes to me, it's a long curve.

This blog has always been a place for me to brag about my companions and express the excitements and downfalls of my hunts. I don't claim to be an expert on chukar hunting or any kind of hunting as far as that goes and Jake and my outing today is proof of how stupid (politically incorrect word, but true)I can be.

Remember a couple of weeks ago a couple of guys from Bakersfield showed me how to be properly prepared with my side by side, well today I got another lesson in preparedness. On a normal day my pack weighs in at about 20 lbs. with water and all accessories and I've felt I've always been prepared for almost any situation when it comes to chukar hunting. I have a list and I pack all that gear into my pack at the beginning of the season and restock anything that I have used when I return home. Some things never get replaced and just become a fixture in my pack.

Today I finally got to use one of those fixtures not often used. My multi tool kit and the needle nose pliers. Yep, Jake finally did it. 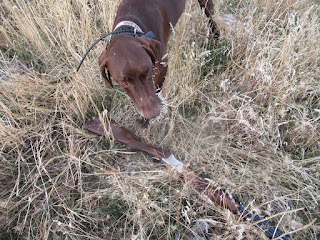 Jake wasn't too pleased when I got my kit out to find that it had been in my pack so long that I had to cut the sheath off. It was almost glued to the metal. Then, when I finally got the sheath off the pliers were rusted shut. It sure makes a lot of sense to pack something like that around. Jake had as many quills in his mouth as outside and I got as many out as my arthritic hands could before we headed for the truck and the vet. How much time does it take to go through your equipment before you venture to the hills? Maybe all of five minutes. Learn from my laziness and be more prepared even if only for your dogs sake.

Secondly, Jake has shown some signs of chasing beginning this summer. We have a couple of wild cats in the fields around our property and they quite often hang around our pond. Jake has pointed them quite often and resumed a chase when they would take off. I'd yell at him and he would finally give up the chase but one time caught one for a brief moment. He's been fine around cats before but these two introduced him to the fun of chasing cats. I told Barbara that this would be a good training opportunity and should put the shock collar on Jake for the next time the cats came along and put a stop to the chasing. Learning to chase cats my translate into chasing skunks or porcupines and this was the perfect opportunity to put a stop to that. But I second guessed myself with the reasoning that he didn't chase rabbits when we're hunting so he won't chase skunks or porcupines either. My laziness of not doing the right thing and taking care of problem cost me and Jake a day of hunting not to mention a vet bill and much discomfort for Jake.

It don't matter how many years you spend on the mountain, some of us have to go back to the basics at times to become better. Don't put off those little things because sooner or later they may become a big thing.
Posted by larry szurgot at 12:42 PM

Brings back memories of a retrieved to hand big porkie. I didn't accept the retrieve. She dropped it and it walked away. 320 quills later and 3 that came out a month later and a vet bill in a small farm town she was ok, but hated porkies the rest of her life and took a few more hits from them over the years.

Thanks for the reminder and I'm checking my bag of tools now.

A fish bio friend had an airedale on the clearwater river who got into 18 porkies.....the last one killed him. ON cats......cats were put on the earth solely to entertain dogs.

I think by that time if the Porky hadn't killed him I would have. I guess I've been pretty lucky all these years.

Larry
Watch him carefully around porkys now. I have had a few dogs that seek them out once they've been stuck to get revenge. It doesn't work out for any party involved. Good luck keeping Jake safe.

Hunted Montana for several years full of pokeys I was lucky and able to remove all quills my self. This has been a bad year for chucker here in Nevada north of Winnemucca both sides of 95. I hunt 7+ miles almost every day and only find 1 covey and just 1 of 3 of the days only 1 day did have I found 3 coveys bad bad bad. I hunted Oregon for the first time this year north of McDermott NV was the same not good. The only good thing is my practice shooting and change in method with the Chris Batha's Instinctive Shot book I Kill yes Kill not harvest (to hell with the sissy Left) at least 2 birds from each covey. Going south tomorrow Hope you are having good luck. James T

Ron, every time Jake has pointed a brush I approach the point a little different since the porky incident. Hopefully it's a once in forty year thing but it sure has my attention.

James T, Bummer about the low number of chukars you are finding. Except for a couple of my hunts the number of finds goes up a little each week. I am going to hunt four new areas for this year in the next week to ten days and than I'll start my rotation again in some of the areas. It will be interesting what I find the second round in these areas. Hopefully, I'll be killing some birds also.