With the fresh snow that had fallen yesterday I figured Jake and I would chance a hunting trip. I have to admit that as I age I like hunting in the snow less and less. Today was no different even though there was plenty of excitement. As always with the snow my shooting percentage drops and I constantly slide down the hill. Luckily the ground was soft under the snow so most of my landings were good.

About 1/3 of the way up the draw Jake started milling around in an area with a high curious nose. There was a hole back under a log and I figured it might be a bear den. I took my pack off and left my shotgun with it and took my camera down for a possible picture. I was a little surprised when a small bear came charging out and headed up the hill. 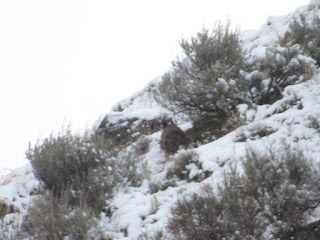 I've found several dens in the past and the bears are pretty lethargic this time of the year. December 2nd five years ago I found this den and the large bear inside let me take pictures but gave a low grumble as I tried to touch him. 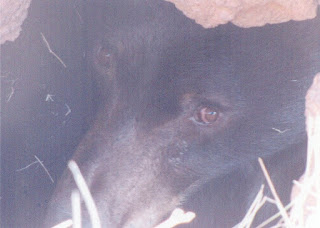 But this little guy was having nothing to do with Jake and I. He headed up the hill and flushed a covey of chukar as he left. 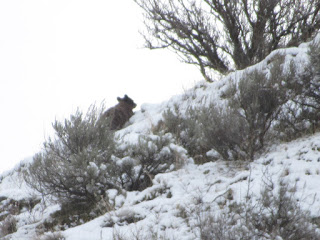 Now this is where a smart hunter would think "let's follow these chukars around the hill. This may be the elevation they're at." But no, Jake and I continue up the hill to the ridge top where there was about 6 inches of snow with 12 inch drifts. I might add there were no chukars or tracks on the ridge but a little further up were a lot of crows so maybe we should investigate. As many times as I'd fallen in the snow most people would figure they had gone uphill far enough but for some reason my brain doesn't work that way. I was a little disappointed  when I found what the crows were eating on but realize it's just part of nature. 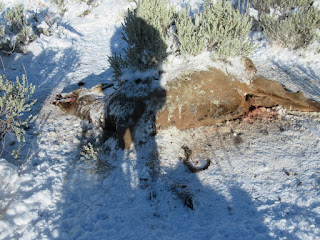 About three hours into the trip Jake finally went on point. 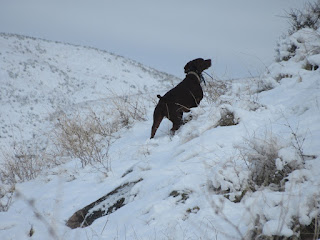 I moved in above him and a large covey of chukar exploded from the brush. I could only get one shot but lady luck was with me. 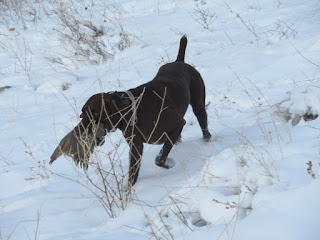 I usually don't follow a covey flush but there was about forty birds in this group and they flew way down the slope. I figure that was a good clue to get down there. It was a long time before we got down to the birds elevation but we started busting covey's as we got to the lower hills where the snow was already melting off the south sides. Jake did a great job on the birds that would hold but got a little excited watching birds running on top of the snow and up hill. I'd see him following the tracks up hill and pretty soon the birds would be flying with a quick excited bark. He'd come back down the hill and we'd get back to business. I was getting a little tired and was bummed when we saw these elk between us and the rig. 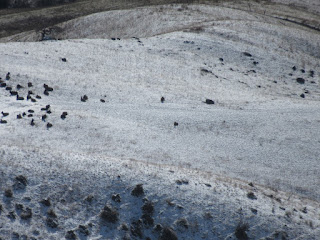 We made a big loop around them so as not to spook them and we got paid back by picking up a couple of huns. 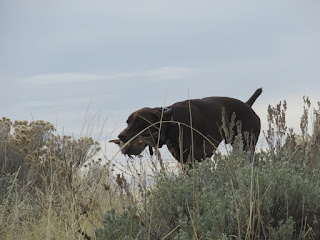 I shot about as poor as I have all year but thanks to Jake we still came home with a few birds. 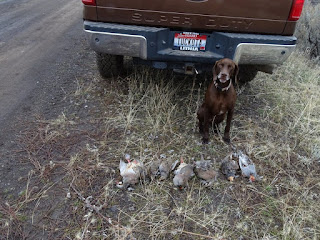 By the time we got back to the truck a lot of the snow had melted off the lower grounds but I was too beat to go any further. About one more day of weather like today the snow will be melted up to a reasonable point for me so Jake and I will probably attempt another hunt. We saw loads of birds once we found them. I'd guess 100 or more chukars and another 40 huns. These birds had lot's of fat reserve and are going into the winter in good shape.

Good luck in the final 58 days of the season.
Posted by larry szurgot at 7:57 PM

Jake looks good with a little gray on the muzzle. Glad you are having a good season. Mine here in Oregon hasn't been bad either. I've had to go to some new spots and it's been fun learning new areas. Hopefully, the big snow storms can stay away for a while longer too!