It's getting to be that time of the year again. I'm starting to see those posts about the low bird numbers for the year and how last winter almost devastated them. Of course some of the post blame the F&G. I'll be the first to applaud the F&G for the job they do, even though there isn't much they can do when it comes to chukars. They are definitely a self regulating bird and can survive conditions a lot harsher than pheasants and quail from the lower valley. In fact, I believe the big game animals did a lot better than was expected. 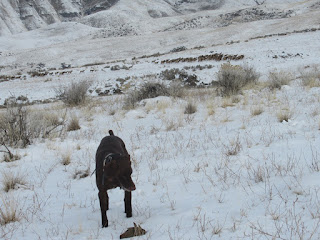 Since my fall I've worked on traction 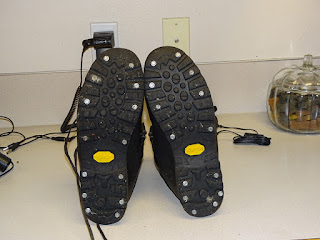 and it's got me into some fun sightings along the way. 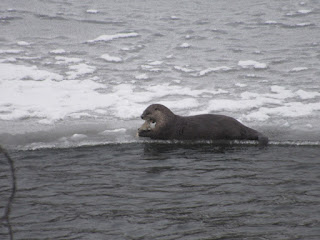 As far as the chukar numbers being very low this year I have to call hog wash. This is turning out to be one of the best years in my recent memory. Even in Oregon where I zeroed out on opening day and didn't even see a bird, things turned around, A week ago, I went back to that same spot and found a very respectable number of birds. 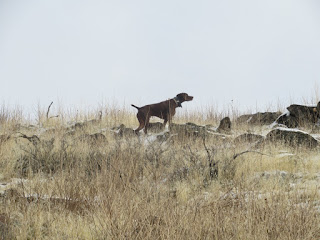 Jake was loving every minute of it 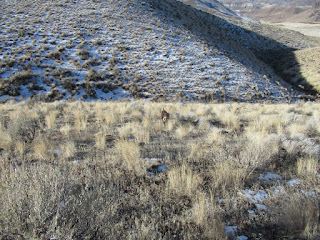 and so will my stomach be. 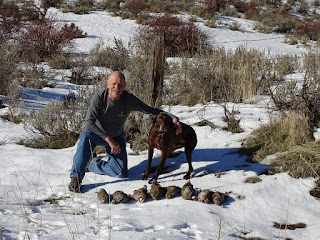 I worried earlier this year about all the young birds with very little fat but every bird I have cleaned.
Since then they have been very healthy and if they can escape all those predators from above will be going into the spring strong. Every once in a while Greg and I get the same day off from work and grandkids to chase some chukars and this was his take last week on an Oregon hunt. 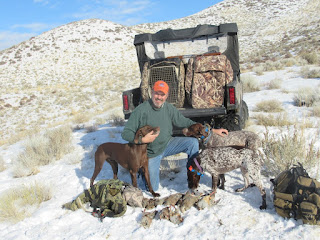 Notice how Jake had to jump in and still some time from Trudi and Nikki.

I've been keeping records of my hunts for the past 25 years and I have to admit to putting on a few more miles this year then in the past and maybe that's because there are fewer birds, but I believe that they have just relocated for one reason or another. It seems like when we find them they are everywhere. Also, people have quit hunting, which is one of those self regulating parts of chukar hunting. When the birds aren't easy to find people stay home. Also last week in a popular hunting stretch in Oregon, Jake and I spent the day chasing chukars that did not want to cooperate. 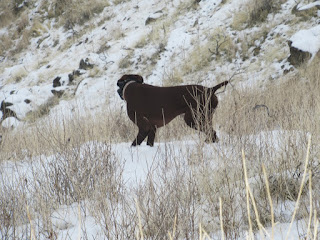 We didn't see another human track and the snow had been on the ground for at least ten days. There were plenty of birds to be had and the only shots we heard were from my newly stocked citori. Which worked as good as it use to when the birds would hold. 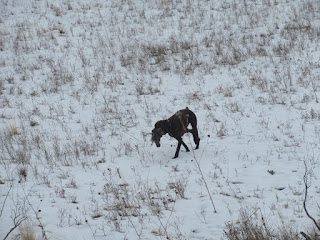 Jake and I ended up a bird shy but it wasn't for the lack of birds but more because of my shooting. I usually drive past this spot because of the hunting traffic. 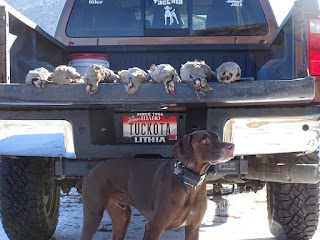 And then there is Idaho. The greatest state to hunt that there is in my opinion. Where else is there a possibility to shoot both 8 chukars and 8 huns in the same day? It doesn't happen very often but it's fun at least having that possibility. I've hit the Idaho slopes once since the Christmas break and had what I would consider my best day on the mountain so far this year. It was kind of the same old stuff for Jake 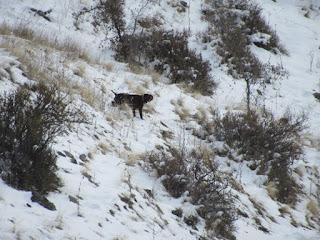 He had no idea what he was looking at as he retrieved this bird to me. 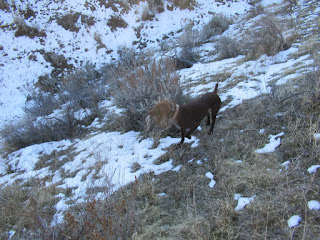 It was a cougar, which I failed to get a picture of. A little later we saw an even bigger one striding through the sage where it looked like elk had been laying. I have encountered numerous cats while chukar hunting which is just one more of those great reasons to be out chukar hunting. The closest I could get to a picture was of old tracks. 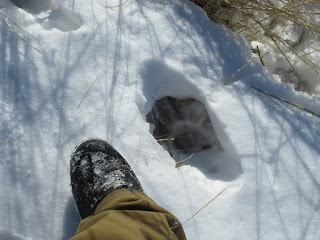 This last picture is Jake's take on our last hunt in Idaho. Although the temperature never got above freezing the sun made it a long sleeve t shirt type of day. How can you beat a day like that in the field? 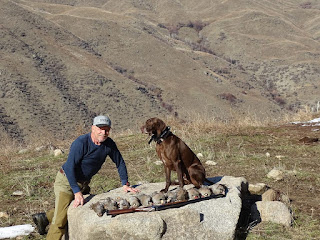 Although it may seem that I am bragging by posting these tail gate pictures, that is not my reason. I'm proud of what Jake and I accomplish and I'm sure Greg Allen is also. I'm not a great shot, probably not much better than average and I'm definitely not a weight pusher or into aerobics or other work outs. My only exercise is the mountain and I'm very fortunate to have the time to get out at this stage of my life. If I can find the birds then anyone else with the amount of time to spend in the hills can find them.

So to those who say there are no chukars out there this year, once again I call hog wash. Although last winter might have done some damage to the populations the great spring we had made up for it. Don't use lack of birds for an excuse to not be on the mountain.
Posted by larry szurgot at 6:39 PM

Early in the Idaho season when we ran into you Larry, I had told you that we saw more Huns than I can ever remember. We probably saw more chukars in the 2016 season, but we saw plenty of chukars throughout the week to keep us optimistic and excited for next season as well. The bird numbers seemed better than average this year. With a little luck on the weather, we should all have a great season next year. Already looking forward to it!!

I will say there are areas with fewer birds than in past years. Some areas, are very poor,and some areas are really good. I just eliminate the poor areas from my hunting list this year and hope the hens can step up their hatching game next spring. But overall it is a good year if you have the legs and good dogs. I didn't buy an Oregon license this year, but did see areas with good #s while helping my boy find his bull elk over there.

Lately, hunting new spots in idaho exploring, i've had days with 3 covey finds, most of the group's are good sized, and I've had 10 covie point days lately

Conditions are good for survival this winter, lots of green up and the hens should go into the spring in good condition, we just need to hope for excellent hatching conditions may-july and things can turn fast. 2016 I saw a hen in July with 2 week old chicks, 29 of them.

And to those who say there are no birds. Try other spots. It's a great time to be exploring, may just find the next honey hole to put on the map. Or like Larry. See elk, deer and cougars which is awesome.

Very motivational post for me! I've been exploring new areas a lot this season and it's been so fun. A lot of times while I'm driving in the early morning darkness to a new spot I'll tell myself that today I will chase after coveys and break them up to get some good single action. But, I never do that! When I get there, I want to see what the next hill and draw offer. Who knows, maybe I'll finally find the motherlode before the end of the season and get my eight once this season.

Here in Northern Nevada chukar hunting has been spotty. The primary area that we have hunted has been very good. Six and seven covey days with 15 to 30 birds per covey. In other areas, fewer and smaller coveys. The further off the road you get the better, with the exception where hunters with side-by-sides can drive to. We noticed a lot more Oregon hunters this year, especially from the Grants Pass, Klamath Falls and Medford area. They report a large winter kill and very few birds in central Oregon. It is the end of the first week in January and the weather has been mild, the coveys are holding their numbers, the birds are educated and much smarter than the average chukar hunter, so I'm optimistic about 2018.

Alas, nary a feather, track, or dropping of a chukar in one of my favorite haunts near Salmon, Idaho. I'd heard a similar report from a colleague two months earlier, but was hoping some late maturing broods might appear. Given the severity of last year, it may be 2019 before huntable numbers return this far north. But I've heard much more encouraging reports near Lewiston, and hope to investigate shortly, weather permitting.

Bummer Michael. I was up in Post Falls this weekend for a wrestling tournament and stopped by Lewiston on my way home to visit a chukar hunting friend. He indicated finding good number of birds so you might try that before season ends.

Hi fellas -- thanks for the updates - its always fun to hear how others have been doing.
Here are my findings:

Magic Valley (where I do 75% of my hunting) : Bird numbers are about 1/3 of what they were last year. Typically I walk 1.5-2 hours before finding birds. That said when I do find birds they a have been very cooperative; acting like young of the year that have never been hunted...... and they probably haven't since I am yet to see another hunter out in my main hunting grounds this year!

Weiser/Brownlee: I did one trip over there and found poor numbers (might of just been an off trip)

Hells Canyon: My wife had an elk tag there so i poked around and found similar numbers compared to previous years.

Lower Salmon River : Outstanding but challenging country, I have done several trips and my trapping buddy in area is seeing more chukar than he can ever remember

I am curious if anyone has hunted the Owyhee Canyons this year? Last year I made a trip down there and the numbers were great - curious how they faired. I did jump a fire in the very southwest corner of Idaho this past August and saw a fair number of youngsters ---- just haven't had time to make it down there to check for myself.

Thanks Larry - I always appreciate your optimism. And by the way I LOVE seeing all your "tailgate" shots-- sometimes after listing to podcasts ect I start to feel like I am the only one out here who actually loves hunting/killing birds and attempting to fill limits with my pups! Any rate you and Jake should be real proud!

Michael
I am from Missoula have hunted chukars once a week in Salmon-Carmen-NOrth fork—panther creek past 20 yrs— this is first time I gave up after three different(but historically good) areas failed to show droppings, bird calling, or birds—terry

Rob, I have hunted the owyhee's several times this year and in fact am going there tomorrow morning. The numbers have been good and the birds are a lot further from the reservoir than the last couple of yeas.