Jake took me on a challenging hunt today. He decided the birds were up high, so we went up into the snow and gave it a whirl. 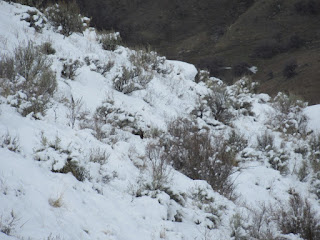 Yes, that's Jake in the middle of the picture. Yes, the snow was that deep up there. Yes, I was on my butt quite often. Yes, I can see those bare slopes way down there. After several exciting points, falls and misses I finally got a double. One of the birds dropped quickly and fluttered in the snow and my second shot hit a bird that traveled about two hundred yards down the slope. Jake quickly gabbed the first bird and then dropped it in pursuit of bird two. It was fun to watch him try and figure things out. Half way down the hill he stopped and started back up towards bird one when the lower bird started flapping. That was enough to encourage a retrieve on that bird. 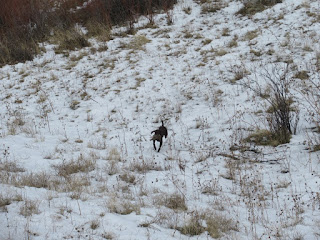 Jake returned to where the first bird was and placed number two next to it. He looked up at me like I should come down and pick them up. 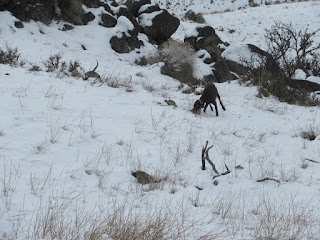 He finally picked one bird up and then the other and tried to pick them both up a couple of times before finally bringing them to me one at a time. 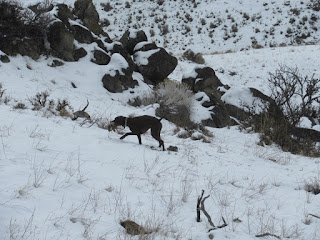 Jake gave me several other opportunities but my eyes must have been crossing because I missed a bunch. We took a picture of our birds and decided that this was our two bird personal limit day. 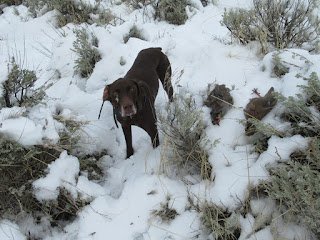 Now we are conservationists.
To add to my woes, Larry Semmens sent me a picture of the Scaled quail he was hunting down south. That does seem a little more fun than I was having in the snow today. 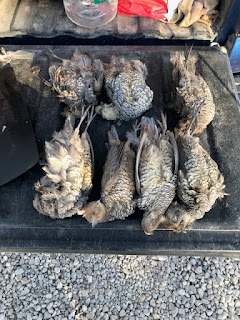 Seven more days in Idaho and Oregon. Better get out and get er done. Try not to be the conservationist I was today though.
Posted by larry szurgot at 7:45 PM

We are closing out the season this weekend down here in California. Pretty good quail numbers overall. Like all of the western states hunters, we are hoping for favorable weather patterns to follow up last year. I expect to be back up in Idaho next year and hope we can run into each other again. I will sure miss your hunting recaps this off season. But I will use the off season to improve my conditioning (inspired by your long mileage hikes with Jake). Take care and close well!