I took my birds to a bird biologist friend of mine to have them aged for curiosity sake and here is what he came up with.
Out of 16 birds there were only two adults.
Out of the remaining 14, eleven of them appeared to be hatched in June and three as late as August.
15 of the birds crops were filled mainly with grasshoppers and some seeds while the remaining bird had all seeds.
There was very little sign of green grass sprouts.

These birds were shot in two different locations at least 50 miles as the crow flies apart but the results were very similar.

There was no sign of fat on the birds which he said was probably due to the low amount of fresh grass to eat.

I don't know what any of this means except for the fact that 14 of 16 birds being juvenile is a good sign that the hatch was good. Guess I just needed something to do on this day of leisure. 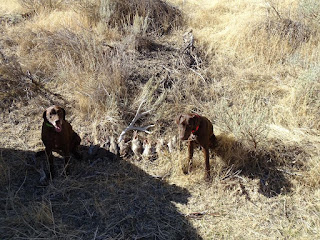 Posted by Tuckers Chukars at 2:09 PM

Very interesting, I have not had many birds with grasshoppers but quite a few with green grass. Most were filled with seeds. And most birds appeared to be younger birds.

I found more adults than juveniles north of you. fwiw

Anonymous, I am curious as to to the method you are using.

David, he ages the birds somehow by the wing feathers, something my limited brain can't quite grasp and the really young birds I could even tell by the immature coloration.

Thanks Larry, I actually know how it is done. I have a lot of friends that only do it by size and color, and wanted to see if anonymous was doing it the same way. Here is a good article on how to do it.

Cant get the link to work.

Lets see if this link works.

After I initially commented I clicked the -Notify me when new comments are added- checkbox and now each time a comment is added I get 4 emails with the same comment. Is there any manner you'll be able to take away me from that service? Thanks! best online casino