Wow! was the end of September hot. My pick up said 87 degrees at 4 p.m. on the 29th over at Brownlee and my pups and I thought it was closer to 100. Needless to say with the temps like they were and the lack of any moisture, hunting conditions were pretty tough. But, with our limited brain capacity, Grady, Jake and I spent three days over on the border chasing the birds. Barb came along to comfort us but showed very little sympathy as us mighty hunters spent most of the afternoons on the bed in an air conditioned camper. 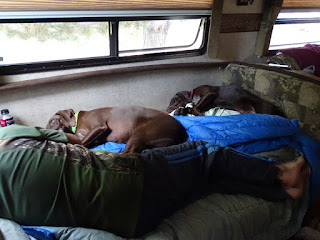 The good news is there seemed to be plenty of birds. The bad news was by the time we found them it was getting warm and we were running out of water. The places I saw birds a month ago seemed void of wildlife but thanks to some birds of prey we found that we had to go higher. It was hard to do since we were seeing birds right on the road as we drove into the area. Chukars and huns were pretty much separated in different area's with the huns hanging in the taller grass area's.

Three other bird hunters were leaving the day I got to the camp ground and told me they found plenty of birds where they hunted. As I watched them clean their birds I could tell they had a successful hunt. They said there didn't seem to be any of those really young birds and from what I saw on the mountain I have to agree.
Troy, congratulations on your new pup, Ben from Jeff Funke's kennel. I'm looking forward to hearing some stories and seeing some pictures of how Rowdy does introducing him to the chukar hills.

As far as Grady, we didn't have any outstanding things happen. He did have a couple of so so points that produced birds, but I could tell he wasn't even sure there were birds there. But with conditions as they were, Jake didn't fare much better. Grady did have one exceptionally good point. It was hard not to take my camera out and snap a shot but I wanted this point to be a good training opp. Grady let me move about twenty yards in front of him and I could tell by his eyes that the birds were between us. As I moved towards him he stayed staunch until a sparrow took off from the grass a yard in front of him. At least he got me excited.

Each day over there I saw about 100 birds. I do believe there were a lot of birds we never saw because the dogs walked right through so many covey's not getting any scent until it was too late. The weather looks to be cooling down and some moisture is on the way so I believe my dog work is going to improve quite a bit. By the amount of success pictures I see on other sites, those who are tough enough to endure these bad conditions are finding birds. The rest of the season is going to get even better as conditions improve.

Good luck out there hunting and pack plenty of water for your canine partner.

Posted by Tuckers Chukars at 9:21 AM

Excellent pointers can be bumping birds all over. It's extremely dry. 1" rain will change the landscape drastically for hunters, dogs and birds alike. Also good cheat greenup is key for winter chukars.

Here’s a water saver tip: give the dogs water in a gallon freezer bag. It will catch all the drips and spills; it’s wet and the dogs don’t mind.

Thanks Larry. It surely was a hot opening week. I will try some camera work with Rowdy and Ben, though I highly doubt that I can match your polished field takes of Jake and Grady. I will dedicate the rest of my bird season to getting Ben up to speed for the coming years...looking forward to it!

Grady's point on a sparrow was refreshing to see other pups beside my Oakley will make do with whatever is around. Due to the lack of huns up this way, Oakley is intent on finding every meadowlark on the mountain. We hope to venture down your way in the next week or so.

Any snakes?
Alan,Mays and the setter

I did see one rattler on Saturday but it was so interested in getting away from me I decided not to shoot it and get the dog's excited about thinking they had to retrieve something.