Barb and I took a four day trip over to a popular camping spot which also provides some pretty good chukar hunting. There were plenty of other campers there and many of them having hunting dogs meaning we weren't alone at chasing chukars. It was evening time so I decided to make my rounds and see what people were finding. For the most part people seemed pretty happy and were finding birds. 3/4 of the hunters were from out of state. I was a little slack on getting pictures and names but the states included were Georgia, Wisconsin, Arizona, Washington and Tennessee. All of them were positive and were pretty excited about the number of birds they were seeing. Except for the guys from Arizona and Washington this was their first trip to Idaho. I have to say one of the reasons I didn't get to visit more with them was because they were out hunting almost all day. They evidently were taking advantage of their time in Idaho.

Dog's breeds were also very different. We had many English pointers and English setters along with Weimaraner, Brittanies, Labs, and GSP's. I didn't see one unhappy dog.

There were two different groups of Idaho hunters also. We got a little more time to talk because shortly after I returned from hunting each day they were at our camper to see what I had found. If these two groups read my blog I'll probably lose them after this post. They seemed to be the only ones upset with the bird numbers. Of course they were back at camp by noon while most of the non residents weren't back until very late afternoon. I guess we all can read between these lines and make what we want out of it but I can tell you I enjoyed my conversations with the non residents because they were just excited to be here.

The only pictures I got were of these two Georgia guys and their dogs. These two, along with a guy from Wisconsin had hunted many states for various birds but this was their first time at chasing chukars. 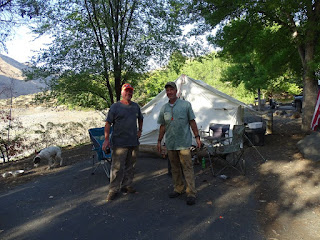 They definitely were from down south with that accent. Oh gosh, I hope that wan't politically incorrect. From the feathers around the camp I could tell they had at least chukar, huns and Blue grouse in their bags. Listening to their stories I could tell they were getting the full deal with their Idaho hunt, especially when they talked about where they were finding chukars and how they couldn't make those down hill away shots. Pretty familiar stuff to me. 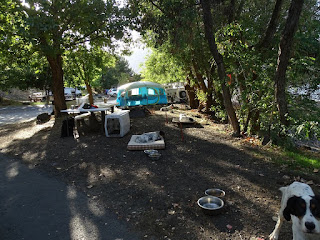 Two thoughts I came up with this week. As residents, maybe we expect too much when it comes to bird numbers and secondly, maybe we give up too soon and get off the mountain. These guys didn't seem to have a problem with either.

Now, what did I find. Day 1 had me thinking maybe the bird numbers weren't there. It started hot with Grady taking off like a mad dog and soon we saw three blue's flying down the hill. Barb, wanted to walk a ways with me and do some filming and it wasn't long before Grady found birds with Jake honoring. Barb decided to keep me out of the picture so I wouldn't be caught missing again.
After this video Barb left and the three of us covered many more miles and saw only three covey of huns and never got a shot. It was looking pretty dismal. But I decided to not give up on this area and cover more different country the next day. As everyone knows of this country you can get out of your rig and never step on the same ground as you did the day before. Take a look at the grass in this picture and you can see why the birds were probably distributed everywhere. We never see this kind of green up this early in the year. 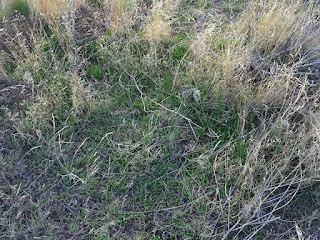 The next two days were much better. Once Grady would slow down and quit over running his nose points became a lot oftener and day ones negative thoughts were soon behind us. Bird numbers were good and not so good. We saw more huns in this area than ever before but fewer chukar. We also saw more blue grouse than I can ever remember.

We took day four off due to the three of us feeling a little abused by the mountain.
Grady put in 67 miles in the three days and Jake put in 58. I put in 24 miles and felt I a little break was deserved. We ended up getting a good number of huns and a few chukars and blue grouse. A first for me. I have never come home with more huns than chukars but I have to say they were every bit as fun.

They're out there. Maybe not in the numbers I hoped, but a little extra walking seems to produce birds. Who knows, over the next ridge might be that honey hole.
Posted by Tuckers Chukars at 4:09 PM

sounds like my saturday. blues everywhere, good hun numbers and where in the world did my chukar #s go that I had scouted in august. this spring travis and I talked to you out turkey hunting and we were getting a small munsterlaunder Oakley this summer. would you share an email for pictures and the story? mark

Absolutely. tuckotatime@gmail.com I remember our visit and always love stories and pictures.

Huns are really growing on me so this is good news. Saturday is our opening day, so excited!

North of your last few days and found some chukar but never saw the first covey of huns , and that is astounding to me. Found several nice hun covey last season and annually for the last twenty years in the same area but not single covey of huns this year. About thirty miles in three was a half days, much of last two in rain sleet snow ice pellets.

Hunting chukar for 45 years at least, mostly in Nevada, when you get early greenup and weather still warm, the birds can just disappear, do not worry, they will reappear on north facing slopes when it gets colder, I really enjoy your posts, keep it up, keep after 5nem, they keep us young

Went back out today and found nothing but chukars. Very young chukars for Oct. 1 but saw good numbers. This year really has me scratching my head. I guess I should start thinking like a dog. " Who cares what type of bird, they all smell great and are fun to point."

As I slowed down due age and a bad hip joint I started finding more Huns. Not until a hip joint replacement did I realize I had been avoiding the rough stuff where chukars hang out. Now I’m not implying that you are following my journey, just pointing out how nice it is we have gentlemanly Huns! Thanks as always for the blog Larry!

Hunting chukar for 45 years at least, mostly in Nevada, when you get early greenup and weather still warm, the birds can just disappear, do not worry, they will reappear on north facing slopes when it gets colder, I really enjoy your posts, keep it up, keep after 5nem, they keep us young.

Ben, from what I have seen they spend most of their time on the south facing slopes when it is really cold. Not only is it warmer but you'll see a lot of green shoots around the rock formations due to the heat radiating off the rocks and germinating the cheat grass. I try and concentrate on the southern slopes late in the season but tend to watch more birds take flight across the canyon to the north side when flushed. The early season birds seem to just fly around the slopes to the next draw but late season birds seem to know the other side of the canyon is safe haven.

Found chukars at almost 6000 ft. Smart ones way up top on the rocky ridge. Saw Huns lower down but not as many as last year. Saw no snakes. thanks for the videos and info.
Alan and the Setter

I was low in a place I late season deer hunt but never have bird hunted. Big fire 5 years ago removed thick sage with cheat grass. Last Oct(last week), I couldn't make a stalk on deer without bumping chukar, even at 3500-4000 feet. Went there and no chukar, but 10 point/flushes of Huns. This weekend, back up higher above Emmett, then a month of deer/elk.

To Ben,s comment, they will hang out on north facing slopes mostly until snow push,s them to the south side,, look for those green dropping’s they will be close