After a hard first day on the mountain I decided to look at a few other upland sites and see how others viewed the upland opener. It seemed to be a mixed opinion on bird numbers. There were plenty of success pictures and a few disgruntled opinions about how the fish and game reports were wrong and numbers weren't up. I'm not advocating either way but here's how my opener went. It's not pretty.

First off, I found out how poor of shape I am now in. The last month I made fewer trips to the chukar mountains than I can remember and it showed. I made more short stops heading up the mountain than I can remember and the boys were a little flustered. Especially Grady, who was excited to finally see a gun in my hand and decided full out was the proper speed for the morning. It wasn't long before he ran head long through a large covey of huns. I guessed about thirty. They just helped him find a gear I din't know he had, super high. The good news here was that I had never seen huns in this area, only chukars. Man, I was stoked up for a double limit on opening day.

My main purpose of opening day is to get a picture of the boys on their first point of the season and to make my first two shots count. It wasn't long before I accomplished both. The points weren't picture perfect but they were points all the same. 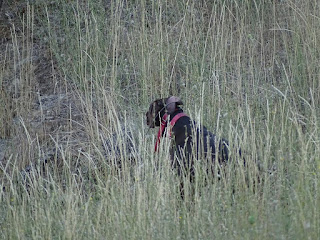 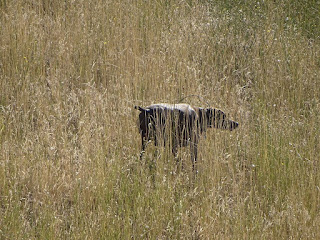 So, now it was time to make my past dogs proud. Once again the boys had a covey of huns on point as I approached. The first shot was way behind the bird I was shooting at and I knew I had stopped my swing through but I learned from that and dropped the bird on shot two. Whew! I only carried two shells with ashes and knew the boys were looking down hard at me after shot one. You'd think with the moisture we had last week the dead bird would put off plenty of scent but it took a while before Grady came up with the find and brought it proudly back to me. With pictures and first shots taken we sat and reminisce about past dogs and hunts. The would be the last time we sat the rest of the day.
As we headed further up the mountain I hoped to loosen up some but the hiking struggles stayed with me for the day. I had thoughts of cutting the day short but the dogs were working hard and loving every minute. Grady is quite an athlete an outran his nose several times. I couldn't believe how much green up there was on the hill already. One inch green grass shoots were every where so I figured the birds would be scattered and they were. The boys finally had a point an honor on a group of chukars and as I was trying to get the perfect picture but they flushed without me getting a shot. Camera or gun. I decided that this out of shape hunter better leave the camera alone for the rest of the day.

The day progressed with the dogs finding several more covey of chukars and me struggling to get to them. Some times the birds held and sometimes not but when they did I usually emptied both barrels with out touching a bird. The most dismal shooting I can ever remember. Two take aways from my poor shooting. Number one; a person should not put his gun away at the end of a season and expect to take it out of the safe on the first day of the next season and perform well. Number two; one of the things never mentioned when talking about becoming a decent chukar shot, conditioning. I couldn't believe how slow I seemed to be at getting into position and getting the gun up. It seemed like the birds had gotten faster but in reality I have gotten slower, a problem I plan on working on.

Eventually a few more birds hit the ground but not after having a game pack full of many empty shells. The best way to describe it is to say Jake and Grady were very embarrassed for me.

When we returned home both dogs were very tired and sore. I had to help Jake get upon the couch. At least that made me feel better to know that my dogs hurt almost as bad as me. The only difference now is that both dogs are ready to go out again this morning but my body says "let's give it a day".

We found plenty of birds. Most coveys had at least twenty birds in them and were this year birds. The hatch seemed to have been good with most birds being from the later hatch. The only take I can get from that is that the earlier spring rains might have had an impact on some of the hatch so they renested and conditions were good for the second time around.

Last week we had some rain and that produced some of the best opening day conditions I can remember but I was surprised that the bird scent was not as strong for the dogs as I thought it would be. They still bumped a few covey and had a tough time finding downed birds. But at least their noses weren't covered wit a crust of dust and sage dust. I've never seen the rye grass (if that's what it is) so tall. In places it was up to my chest and the birds weren't in these areas even though there was plenty of green shoots under. I believe the chukars avoid these areas because they have a hard time taking flight. Huns seem to like it more.

Final tally for the day, No I'm not going to give away my shooting percentage, I saw at least 8 different covey of chukar and would say they averaged twenty per covey, and two covey of huns. I probably saw more but have to consider of few of our finds might have been the same covey as earlier. We spent more time on the hill than I intended and maybe that is why we found so many birds. Why did we spend more time on the hill? Because I shot so crappy and was hoping to right the ship which never happened.

Sorry about the lack of pictures. I ended up putting the camera into it's pouch and it will remain there until I get my act together. Chukar hunting is a team sport and the team can't come home feeling good when the quarter back keeps fumbling the ball.

Looks to be a pretty darn good season so get out there and have some fun with your dogs. Good Luck.

Posted by Tuckers Chukars at 9:00 AM

Thanks for the post. I agree that if a guy can't get to the birds and catch his breath before the flush shooting suffers. I hunt flushers so I need tired dogs before I stand a chance.

You'll be in shape soon, the dogs will settle in and I'll be even more jealous!

I was hoping all the recent rain would start some greenup early this year. Did you notice any in the birds crops? I haven't hunted yet. Got some more fishing to do.

Burk, there crops were full of green grass. The most green up I've ever seen for this time of year.

Good report Larry....now I can use my usual lousy conditioning excuse for my poor shooting. The birds are perfectly happy with my shooting. Snow predicted here later this week so my archery elk hunting will end and can chase some local huns if they are around.

Larry, Green grass in crops this early is great news! Thanks.

All positive---while we can't do anything about bird numbers in a down year, shooting and fitness can always improve! Here's to a great fall!

Thanks for the report Larry. A vest full of empties is better than a vest full of loaded shells at the end of the hunt! I have to say that because it is the normal condition for me on a good day. Glad you found lots of birds! Ptarmigan hunting has been very good this year. More birds than ever and more trips and more miles walked than ever for me in the mountains here. Lots of steep sidehilling the last trip and I proved I can miss ptarmigan pretty regular in that terrain, just like chukar. My pup is doing better each trip, but still wants to race in and get em up. I hope she is over it by the time we chase chukars in November.

Just returned from Brownlee reservoir area, hunted 3 days, have not been there in a dozen years, seams to be better hun country now with all that tall grass, more Huns than chukars, but we did good all 3 days, those hills have gotten steeper than I remember, no hunter pressure as most guys just drive the roads, with that huge green up you better hike way up the hills, now look forward to Nevada, are hills are rocky but not nearly as steep

Glad to hear about all the green-up. I prefer hunting for the birds.