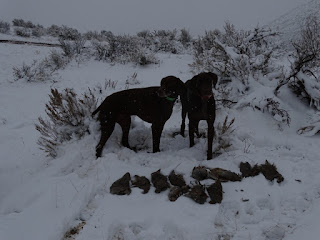 Posted by Tuckers Chukars at 7:11 PM

agreed. saturday with the Dew and cooler temps the dogs were on fire. I hunted the only spot in Idaho i think has green up. I was extremely amazed to find it. The few square miles was lush with grass shoots and the snow cone poops were dark green and the birds healthy. everywhere else in the eastern oregon and Idaho only green up is on creeks and springs. snow is a blessing. need a melt and a warm up to green up the area for the birds and big game.

Sure was a bust for Larry S and me. I had no idea it had snowed so much till we got up on the hill. Didn’t go to where I had planned.Found no chukars,just Huns and they all got up prior to the flush. My theory was they heard me clomping my way to the dog on point. Glad Grady is doing good. He sure does like those porkies. Have fun. By the way Piper is in heat,seven months old.
Alan, Gracie,Piper

Glad you had a great day with your dogs. I am headed out now. Not too far to drive. Hope we find some!