Rainy day today so I got caught today inside looking over old pictures. I don't mean digital pictures but those from a camera that needed film exposures, if that's the right term. I remember packing a camera around back then and having to stop and put new film in because I ran out. I had to climb out of a bear den once because I ran out of exposures and as I was changing film the bear about bowled me over escaping.

Anyhow, obviously I had some fond memories brought back to me such as this one about 20 years ago while hunting with Tucker and Dakota the beginning of TEAM TUCKOTA. It amazes me of how many close encounters we have while chasing chukars. You'd think with all the commotion animals would be exiting rapidly but I believe at times wild animals are interested in what the crazy dogs are doing. This picture is one example. 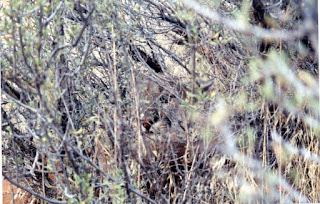 I noticed both dogs acting strange towards a clump of sage but neither dog was acting birdie so I approached the bush. To my surprise I could see this lion staring at me. I was only about 10 yards away when I realized what was there and soon figured it wasn't acting threatening so I traded my shotgun and snapped this picture. As I moved to get a different angle he or she trotted away in a casual manner and the boys went on hunting.

It was a cool encounter since everything went without an injury. But it was also cool to be so close without the cat, dogs or myself getting aggressive. I always have a lion and wolf tag in my possession just in case. Take the case where I shot the lion hot on Dakota's tracks while chukar hunting one year. The lion wasn't a yard behind my dog when I pulled the trigger and later realized I didn't have to shoot. The lion was only using the same escape route that Dakota was using to get out of the rocks. He was just a little faster and probably would have run over the top of my dog getting out of there with me yelling like a crazed fool in fear for my dog. 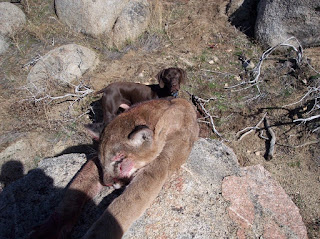 Over the years my records only show two years that I haven't seen a mountain lion while chukar hunting but I have to wonder how many times there has been one within 50 yards of me and the dogs without us even knowing it. There has been three other times that I have jumped a lion at less than 10 yards and they trotted off at a fast lope with very little care. They had plenty of time to get out of the country with the dogs running all over the place but didn't until I got too close.

I found a few other interesting photos but will save them for another day. The weather is looking great for some bird hunting so get those mutts out there and enjoy it. I know I am. 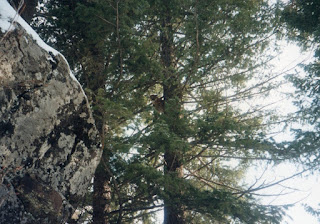 Climbing up tree with her. 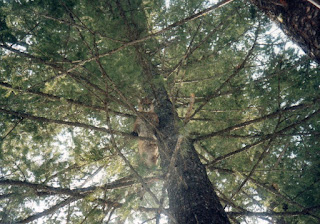 Decided that wasn't too smart so I climbed the tree next to her to snap a shot. When she started digging her feet in I decided it was time to retreat not knowing whether she was going to head my way or down the tree. She lived to hunt more wildlife.

Posted by Tuckers Chukars at 2:40 PM

You have had some great adventure! You are much braver than I am. Good luck and be careful out there.
Alan,Gracie,and Piper

Thanks much Alan. I have been very fortunate to have spent loads of time in the outdoors doing what I love. I also thought I was invincible up until not so long ago while the truth be I had an angel taking very good care of me when I did many of those not so smart things. I added three pictures to that post from back in my archery days of the 80's.