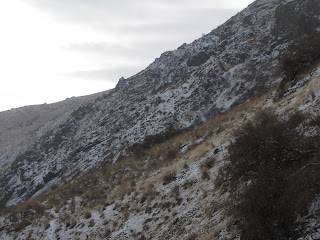 While browsing through a great hunting site, uplandidaho.com , I saw where a 45 year old Washington teacher died from a fall while chukar hunting. It made me think of how many times I've hunted the same type of terrain and could have met the same fate.
Chukars like to take refuge in the rock cliffs. There they can make fast escapes and can get to many places that dogs and people can't. Once they get there they seem to talk even more. It's almost like a challenge for you to follow.
I used to take on that challenge. There can be some fast shooting.Usually your lead pattern falls to the canyon floor causing no damage to the birds. You can find plenty of spent shells in these areas because many hunters have been called there before. I have decided to leave these area to the birds. I have had several close calls in these areas and have been lucky to only break my shotgun once 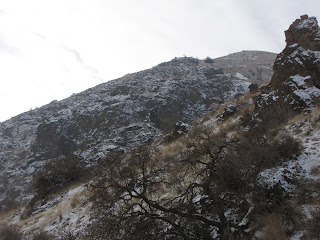 . One time I had to retrieve Tucker from a rock ledge he couldn't navigate after his retrieve. Picking a wiggling dog up and trying to place him up on the next ledge and than getting there yourself is not my idea of having fun.
These areas, although having plenty of birds, never offer good footing for the shot, give you just a split second to take the shot before the bird flies behind the next rock, and most retrieves are near impossible for the dog.
I just stay away from those area now. I still hunt the steep slopes that chukars like, but I stay away from the ledges. I've found that if you hunt the slopes where there are no big rock area you can usually get two or three chances at the birds. They either fly side hill or drop down to another ridge. They are still accessible for another point. Besides I get so much better dog work in these type areas.
The first two pictures are some of the rocky areas I'm talking about. These aren't even that bad. With the snow you can see how easy it would be to fall and bust your can. I remember hearing the chukars calling as I took these pictures.
The second two pictures are of the type country I like to hunt. Although still steep, they are more accident friendly and great slopes to see some good dog work. I had a great day with Dakota after these pictures were taken. 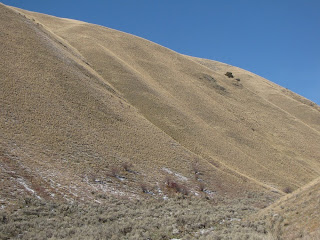 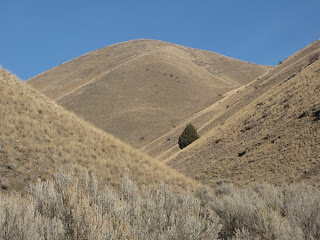 Posted by larry szurgot at 6:55 AM