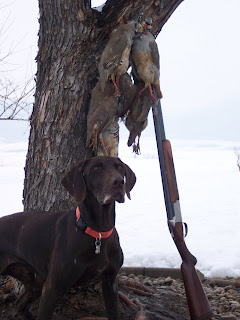 I am about to make the long journey. The journey of saying good bye to a best friend. Barb and I have put his day off long enough. Our vets have given us every bit of help they can. We have finally exhausted every possibility. Any chance of quality and dignity is now lost. Many tears have been shed and many more will be shed in the ensuing days. I know all of you wish me the best and I also know many of you know the pain I am going through. I would just like to share this story with you.
When Tucker was two years old, we were hunting high on a ridge in the Owhyee mountains. It was a December day and exceptionally warm for that time of the year. Chukars were talking everywhere. We had several birds in the bag and were hunting our way back to the truck when we saw another gentleman and shorthair hunting our way. He watched as we approached and saw Tucker lock on point, me flush the bird and make the shot. Tucker hustled down retrieved the bird to me and than we walked down to the hunter. He introduced his female shorthair, Sage, but I couldn't introduce Tucker because he was off hunting again. As we talked Tucker locked up again about 200 yards away. I invited him to help me shoot a bird and he obliged. As We approached his young dog he began scolding her to stay back being afraid she would rush the point. I told him to let her go, she can't hurt anything. To his surprise she got about 20 yards from Tucker and locked up on an honor. As we approached he told me that this was the longest she has ever held point. The birds flushed before the hunter got to Tucker and the gentleman shot twice, knocking a bird down. Both dogs rushed to the flopping bird and Tucker made the retrieve to me with a few growls whenever Sage got close to his prize.
This is not an uncommon story, but the conversation between me and the other hunter afterwards describes how important my dogs are to me, and how special of a dog Tucker is.
The gentleman asked me how much a dog like Tucker is worth. I told him you couldn't give me 10,000 dollars for him. We conversed some more before parting and he told me a trained dog like Tucker is worth a lot. I thought about our conversation on the way home. There was not enough money in the world to buy Tucker or any of my dogs for that matter. Tucker is family. He has been since the day I picked him out of the litter of pups. Yes, he was an amazing hunting dog, but I would have felt the same had he been just my dog. It really is true. Money cannot replace what Tucker has given me. Even in this last month while Barb and I had to pick him up because his hips were too weak his eyes brought us joy. My point is, you can't put a price on love. I love Tucker.
As I lay here by Tucker today his eyes told me he is ready to rest. His head is heavy on my shoulder. My heart will be heavy for a while with the loss of a family member but Tucker left me with two dogs he trained to remind me of his greatness.
GOOD BYE OLD FRIEND
Posted by larry szurgot at 10:56 AM

Cheers to Tucker and yours and Barb's long happy life with him.

All our best as you both go through this rough time.

Thanks Karl. I hope I can live the life Tucker taught me. Make each moment count.