Wow! Christmas started for me a week early. It all started yesterday afternoon when John and Deb Carter stopped by for a visit and also to deliver a present for Riley. In order for you to understand how special this artwork is you have to know the story.

I met John and Deb, along with John's father at Woodhead camp ground. I immediately took a liking to Jon's family and friends.We were all there for chukar hunting and after an evening of tall stories we decided to hunt together the following day. Neka wasn't even a year old at the time and John was quizzing me on training techniques. I explained to him that Riley was my trainer and hopefully he might show us a trick or two the following day.

So the following morning we headed off on the hill. Jon with Taffy, John and Deb with Neka and Riley and me. We started together but were soon in separate draws. After a while I saw Neka covering the hill at a distance and thought I'd venture over to John and Deb to see how it was going.  I can't remember how the shooting was, but Deb had got some good shots of Neka and John with the camera.

We took a quick break talking dogs and were about to get back to hunting when we saw Riley on point.He had been locked up on some birds while we were visiting. So John moved in on the point while Deb took some pictures. She took this great picture of Riley and John made the flush. Riley got to do me proud. 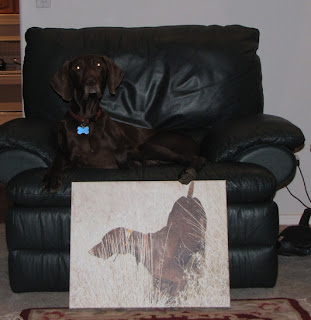 Now Neka is two and hunts like a veteran. She is making a fine mentor for John. What a great gift.

Gift number two came on the hill today. Riley and I were chukar hunting in an area that we knew had bighorns this time of the year so I packed a camera. Shortly up the trail we had this guy blocking our way. 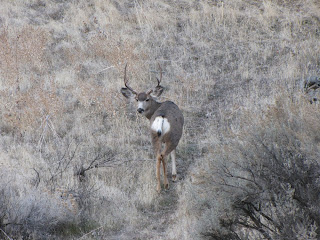 He soon gave us passage and up the hill we went. I heard several loud knocking sounds and although I"ve never heard it before, I was sure it was the sound of Bighorns butting heads. This was going to be a special day. As I came through the sagebrush I heard two rams butting heads but couldn't see them. I looked up the hill just in time to see these two preparing for battle. 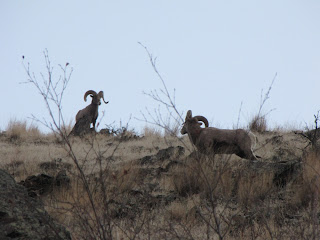 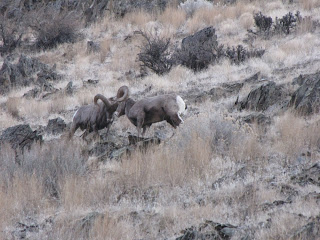 And then this guy was on the charge for a ram out of the picture. 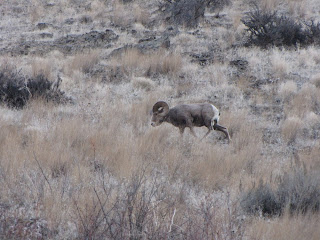 While I was moving through the brush Riley came sprinting past me. I didn't wee it happen but I think this guy charged him. All I got was this picture of him trotting off from twenty yards. 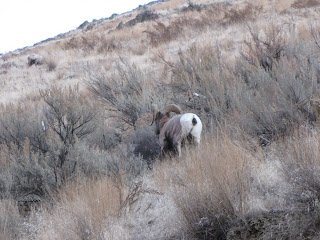 I didn't know the rut lasted this long for sheep. Maybe it doesn't normally but this ewe didn't know that. In the next fifteen minutes wherever she went, the big boys followed. I took many more random pictures until I was too cold to stay. I was dressed for chukar hunting not sheep watching. 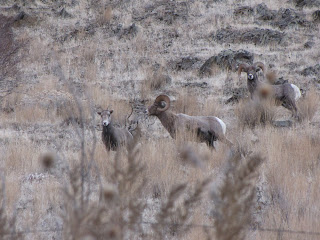 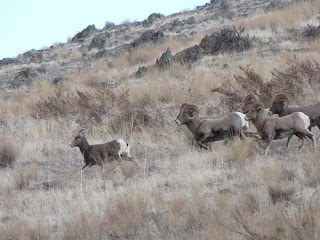 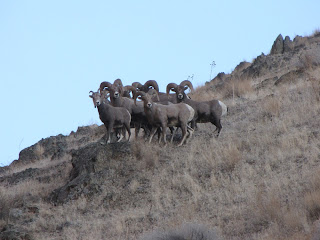 If this is the beginning of my 12 days of Christmas I can't wait for what's next. Thank you so much for yesterday John and Deb and thank you for today God.
Posted by larry szurgot at 4:28 PM