six days in the wind

I went over to Oregon last week and spent six days chasing chukars. The only sad thing of the whole trip was having to come home and take a few days off. Riley needed a break from me. He got tired of watching birds fly away.

The first three days I was joined by Greg Munther of Missoula Montana and his GSP Lucy. Greg is 68 years old but has a 30 year old gait going up hills. We hunted in different directions so we saw very little of each other on the hill. What I did see  is that they are a great pair on the hill and always have some great stories back at camp. All three days were windy with the first day being extremely windy. 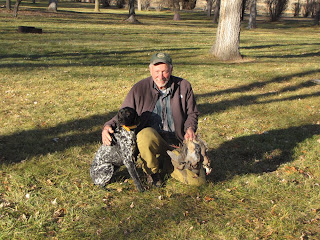 Two of the first three days Greg Allen, my chukar hunting partner for the last 25 years, also hunted along with us. Greg is a hard chukar hunter and always finds birds to shoot. But the second day he brought one of his older girls over and had  specially good day. As you can see in this picture, Nikki is aging some and she has one bad leg so going 8 for 8 is quite an accomplishment. 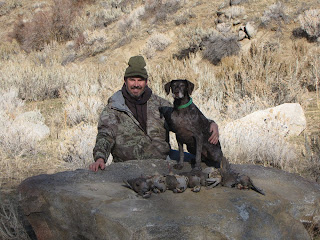 The last two days Jon Carter and his son, John and daughter in law, Debbie joined Barb and I at the camp ground. The Carter clan always brings fun and excitement to the camp and hill. I didn't get any pictures but believe me when I tell you I saw some great bird work from Taffy, Jon's dog and Neka, who belongs to John and Debbie. The last day the Carter's even convinced Barbara to tag along. It wasn't long before Barbare was charging up the hill.

If Barbara was coming, we couldn't leave Dakota behind. This is his 13th hunting season and he has been retired but today he forgot that. It was a thrill to see the old boy on two great points and a retrieve. He soon forgot about his old bones and was covering some pretty good country. Once again, where is the camera when you need it?

Also, on day five a gentleman from Washington joined us at camp. Brian Vonderfecht, camped with us Friday night with some great tales of his setter and chukar hunts of the past. His setter couldn't make this trip because of her age so he hunted with me Saturday morning until we got separated. He even got to shoot a chukar off one of Riley's points.

Every once in a while you run into something different on the hill that gives you a little different perspective. Luckily this particular day I had the camera with me. I saw this guy laying in a valley out of the wind. He watched Riley and I hunting around him and just lay there hoping we wouldn't come any closer. Looking at his face I could see the look of an old man who had little energy for flight. We gave him his space and wished him a kind winter. I'll bet he could have told me some great hunting stories. 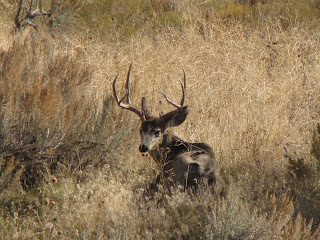 Posted by larry szurgot at 7:50 PM

Sounds like a great trip with good friends and hard working experienced dogs. Isn’t that what it’s all about. Well done.