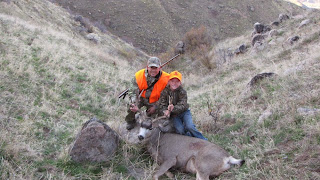 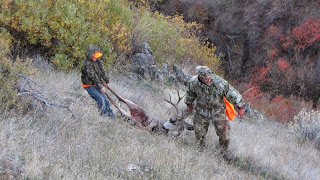 On a side note away from the chukars, my son in law Nick, Conner and I went on a deer hunt Sunday where Nick shot this nice buck. 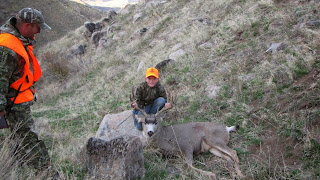 We were better than 2 miles up the hill so I used my knee as an excuse to let them do most of the work. Congrats on a great shot Nick and a man size effort of a 11 year old pitching in on the drag down. Knowing that there will be many more days like the last two make the knee surgery worth doing.
Posted by larry szurgot at 8:18 PM

Larry,
Sounds like Jake is doing great.Looks like you made a decision to have your knee fixed up. How long after the knee replacement can you start walking? I've heard some good things about fairly quick recovery times. Maybe you can get your grandson out hunting and follow him with the 4 wheeler. You are smart in getting it taken care of now. I know its tough to miss some hunting trips but in the long run its the wise thing to do. Keep me posted as I might be in line to have my knee done as well. It really hasn't fully recovered. When I change directions is when it bothers me the most. Our hunting trips have been short as I am afraid to get too far from the truck when I hunt alone. I'm not sure what I would do if I run into a brown bear that is hungry for a meal before hibernation. We still haven't had any snow yet but lots of rain. Take care and don't stress the knee out too much.Oh yeah,take a crutch with you just in case. I throw mine in the back of the truck.
Alan

Jake is doing great. My problem right now is getting to him. The country we are finding the birds in is pretty tough for me to maneuver in. He has learned to hold the birds for a long time if he knows I'm coming. It's those times when he is out of sight and the Astro says he's on point and then I see birds flying down the canyon. Can't see what happened so I don't know whether he broke or the birds just busted. Hard to fault a dog if you don't see what happened.
As far as the knee goes I'm toast. It hurts all the time now. Uphill, downhill, changing directions, flat land, it doesn't matter. I think it hurts as much as my last knee did post op on that replacement. I'd get it done tomorrow if they could move it up.
I'm sure I'm going to be happy with it since the right knee was such a success. This one just came on so suddenly I didn't have time to do the surgery in the off season. The other knee only hurt going downhill so I didn't mind waiting until Feb. 1 to have it done.
I went out in Oregon the last two days and Jake went 56 miles to my 12. Shows how slow I'm going. I had to cut my hunt a day short and come home to recover some. We're going south tomorrow with a friend and hope it will feel better. I do have to say the hunting conditions are great down here and we're finding more birds. Just have to find those steep slopes that weren't parched from the hot summer sun. Jake and I probably saw a couple hundred birds the last two days.
Good luck with the rest of your year and take care of that knee. I've got seven years on my right knee and still believe it was the best thing I could have done.