What makes a great hunt

Today I went on one of those hunts that just beats you up. The hill is steep and there are no flat spots. It's a place that usually holds good bird numbers because most people won't hunt it more than once a year. This was my one time for this year. A few years back, I shot 8 for 8 on this hill and regard that day as one of my best shooting days ever. Usually I come back with no shells and very few birds in the vest.

Today my shooting wasn't much better than the normal day up on that mountain, but I felt fortunate to get plenty of shooting without falling on my butt, which is common on those steep slopes. Jake wasn't real impressive at first either. He figured the birds were up high in the fog and headed right up into it. A couple times I thought I heard birds flying but then dismissed those thoughts, knowing Jake wouldn't do that. I must have been hearing things.

I took the trail up the draw as far as possible before heading up on the steep stuff and into the fog. I could see blue sky up high and was hoping to get above it. 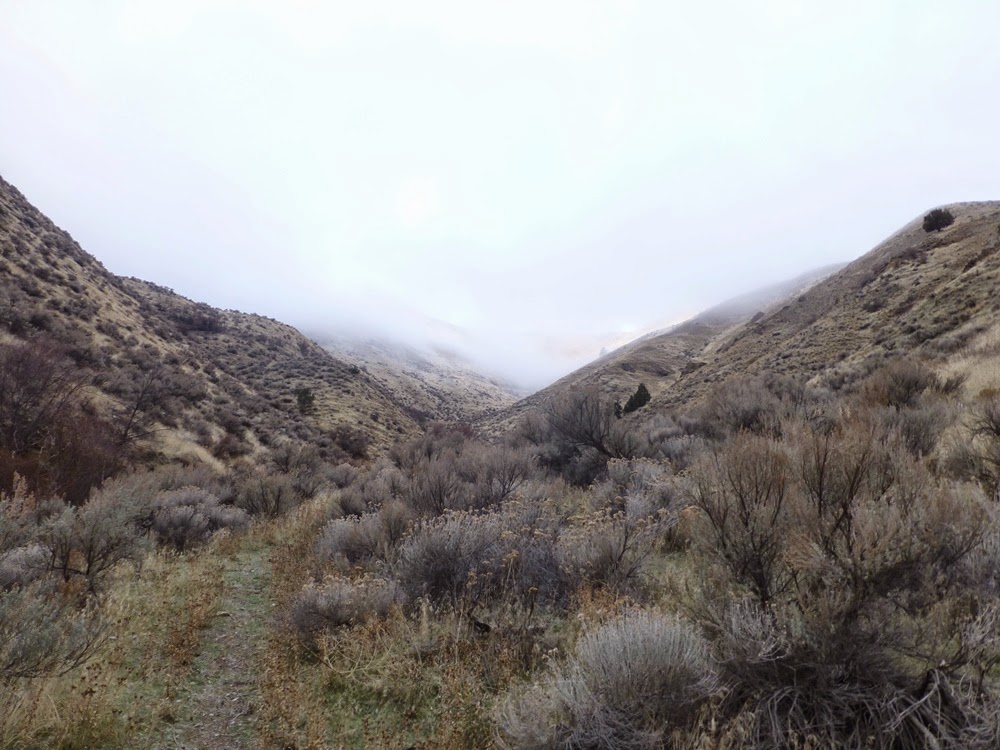 That never happened. The fog moved up with us and before long Jake had a point. 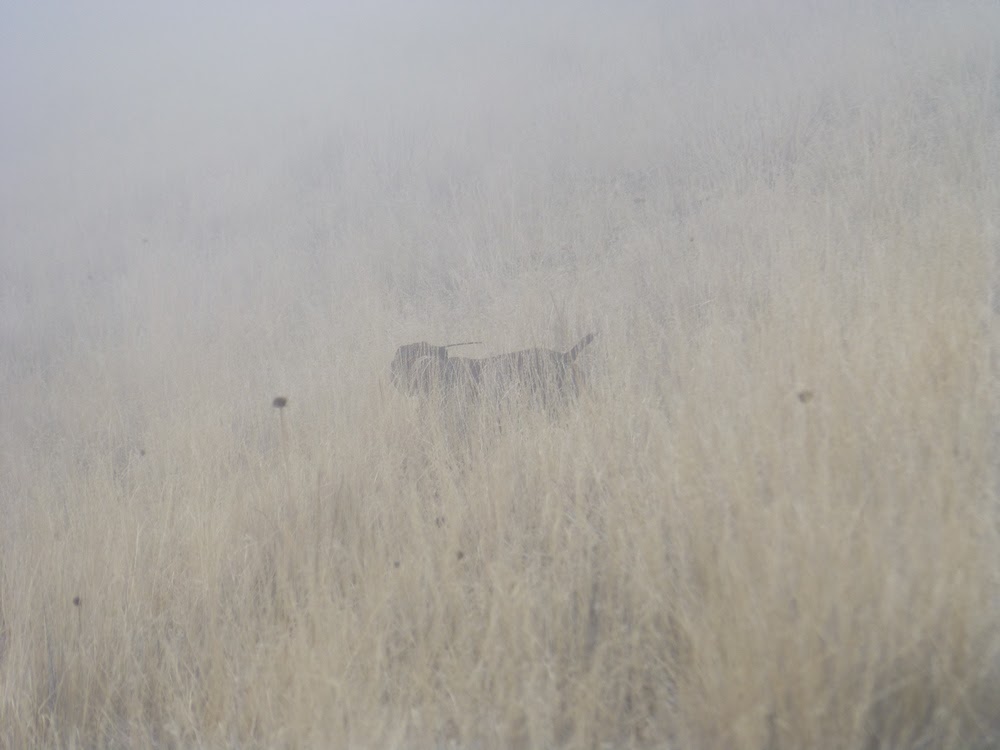 There were a dozen or so chukars that took off but were into the fog before I could even shoulder my shotgun. It was looking to be one of those days. We kept side hilling around the draw and every once in a while hit an open pocket from the fog. Twice it opened up far enough that I could see Jake with his nose to the ground, scenting running chukars and soon chasing them into flight. Another time, Jake pointed until I got close to him and then he broke and chased what sounded to be a large covey into the fog. I was wondering why dogs can do everything so well one time and then the next time look like a totally different dog. I then remembered asking myself the same question about my last seven dogs.

After a couple of hours the fog gathered and moved up the hill, forming an overcast sky. Jake and I had done a few things right and had some birds in the vest. We decided to hunt back towards the truck and dropped about 500 feet in elevation.

I've always wanted to get a picture of my dog on point with the birds in flight. Karl Dehart has done it as well as Leslie McMichaels and have some great photos. Maybe they're not as blind as I am. My camera doesn't have a view finder so I have to look at the back of my phone size camera and hope it's aiming in the right way. I've got several great pictures of sage, cheat grass and blue sky but never of my dog and the bird taking off. Until today. Although this bird isn't actually in flight yet, it's on the run way. 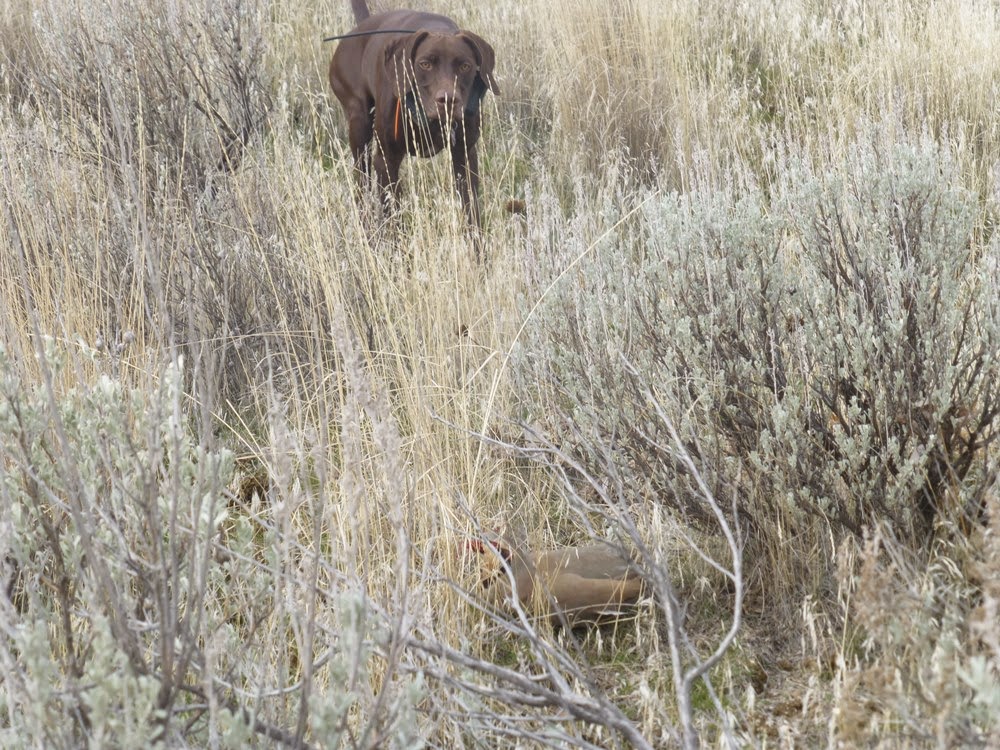 I pointed the camera at Jake on point and when I saw movement I snapped. The bird must have been tucked in that sage. A second bird waited until I put my camera away before exiting and chuckled as he flew off.

We had a few more encounters while heading back. The last one was about a half mile from the truck and a couple hundred yards above the road. Jake was on point looking over a pretty steep part of the hill. My ankles were pretty sore by this time and getting below him took me a while. As I moved below him, the birds flushed. One bird flew to my right and the rest to the left. I hit the bird to my right while Jake was off to watch the others fly away. It looked like the bird fell over the steep bank of the road and I didn't want Jake to go down there and not be able to get back up, so I didn't call "dead bird" and headed back to the truck.

We drove back to the spot where I thought the bird went down and I let Jake out. Even without a shot, Jake trusted me and started searching dead. I pointed up the steep slope and he picked his way up to the sage that I thought the bird had hit and got a nose full. Several times he would disappear and then show up again looking for guidance from me. After several tries I finally walked back towards the truck and called him back. He went back to the brush where the bird had fallen and started side hilling the steep slope with his nose down until he got to the road where the chukar was hiding next to a sign post. 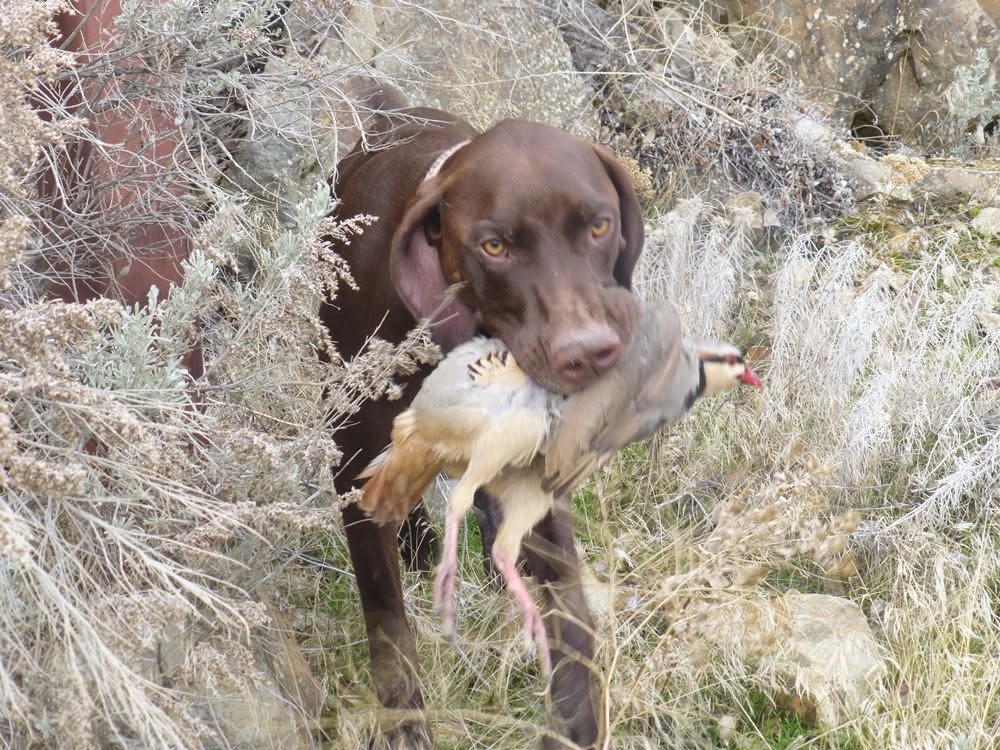 It doesn't take much to make a great hunt.
Posted by larry szurgot at 7:20 PM

Larry,
Great narration of the hunt. I felt like I was there with you. I like the picture of Jake pointing in the fog and the last one where he is bringing back the cripple. They seem to be right most of the time and save us birds that may have been lost. Mays has to go to the vet next week and have a large lump taken out of the area between his arm pit and chest area. we may have a quiet Christmas due to having to let him heal a bit. Merry Christmas to Barb, you and Jake.
Alan and Mays

Mays,
I hope everything goes well with your surgery and you get some good R&R over the holidays. Don't forget to milk everything out of this that you can. Special treats, cuddle time, a warm spot by the fire, and anything else you can get.

Merry Christmas to your whole family up there in Alaska.

Great photos! Wish I could dive into those shots and be there.

One of the coolest chukar photos ever - the bird crouching while Jake is pointing! Nicely done. We have nothing like that.