Let me preface this blog by saying, "Conner's an animal". Today we covered 8 miles and just over 2000 feet in elevation gain. Jake did a little over four times that distance and I wouldn't even try to guess his elevation gain. Conner only complained about his feet being a little sore while my whole body ached and Jake slept all the way home.

Like all my chukar hunts, we walked a couple of miles without any excitement at all, and then Jake locked up high on the hill we had just come down. I let Conner head up to the point while I took pictures. Truth is, I wasn't ready to go back up there and he was. 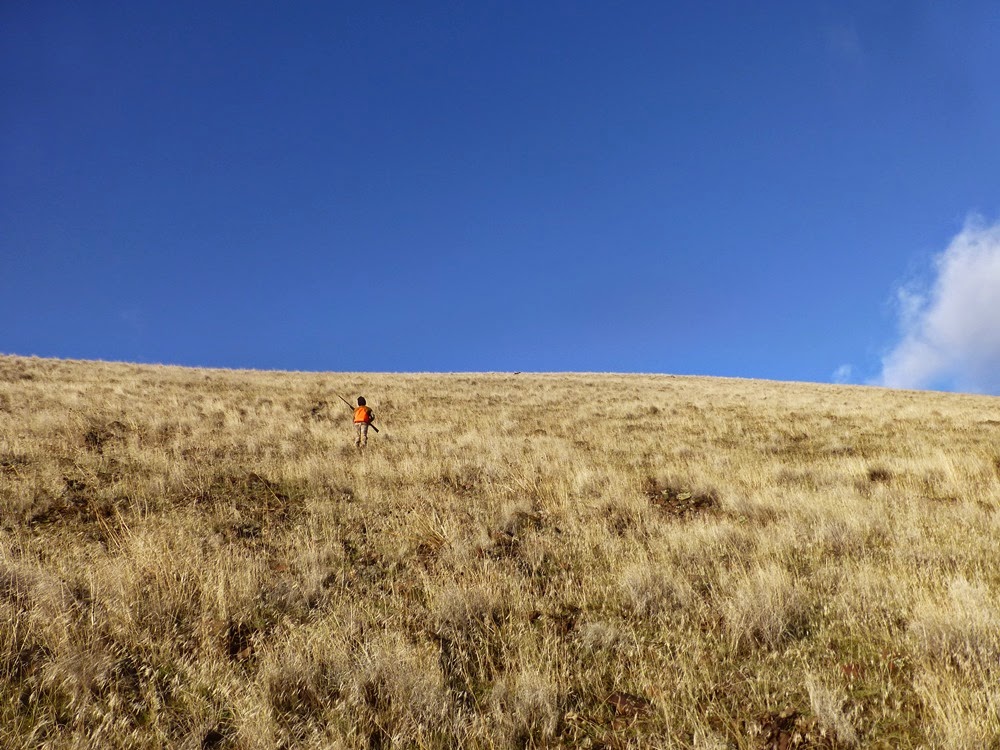 I followed the best I could hoping to get that perfect shot of Conner's first bird, 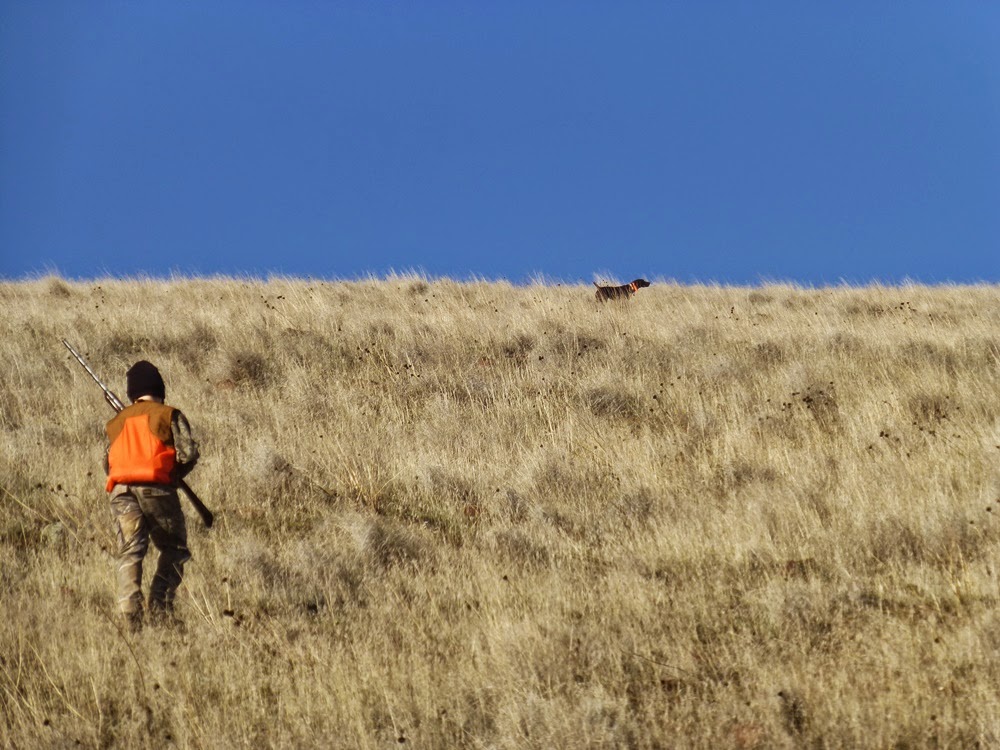 but three huns busted before I could get the camera in the action. Conner's gun wasn't as slow as my camera and he got a couple of shots off before they got out of range of his 20 gauge. He was excited to finally get a little shooting.

The next three hours provided lot's of points and chukar action. Jake had led us into the honey hole for alectoris chukar and he was determined that he would get Conner a bird today. He had several great points and even one of Conner's shots knocked feathers from a chukar which refused to show any sign of injury and flew off with the others.

About 150 birds into the hunt and I can't say how many shots, Conner was getting a little disgusted with his shooting. I've shot hundreds of rounds with him, so I knew it was just a matter of time and encouraged him on. Jake finally locked up in a flatter area and I really thought it was about to happen. As Conner moved in on Jake's point, Jake's eyes kept shifting from Conner to a spot on the ground as if to say "he's right there". 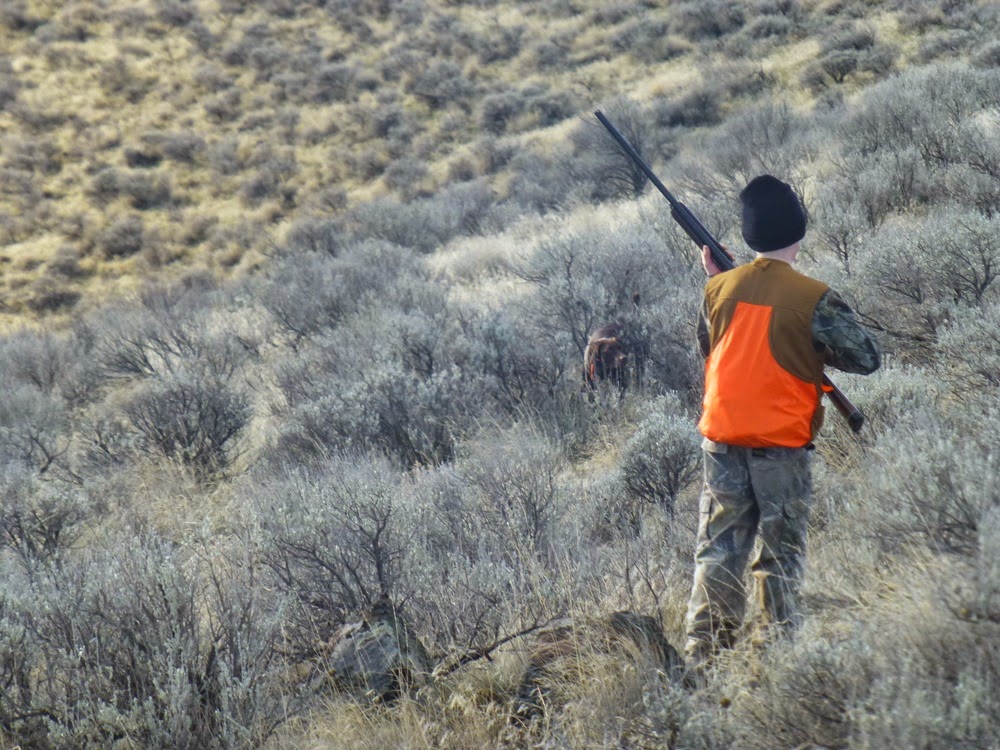 Suddenly a chukar took off running up the slope. Conner shouldered his Remington and, in Conner style, waited until the bird took flight and fired twice. The bird never flinched and kept flying as a second bird took off in the other direction. Conner shot his third shell at the fleeting bird with the same result. They were the kind of shots I've seen him make on quail many times and he looked at me and said "those were easy shots, I should have gotten at least the first one".

We were all getting pretty tired by this point and I could feel Conner's dejection, but that wasn't slowing Jake down. He soon found another covey. 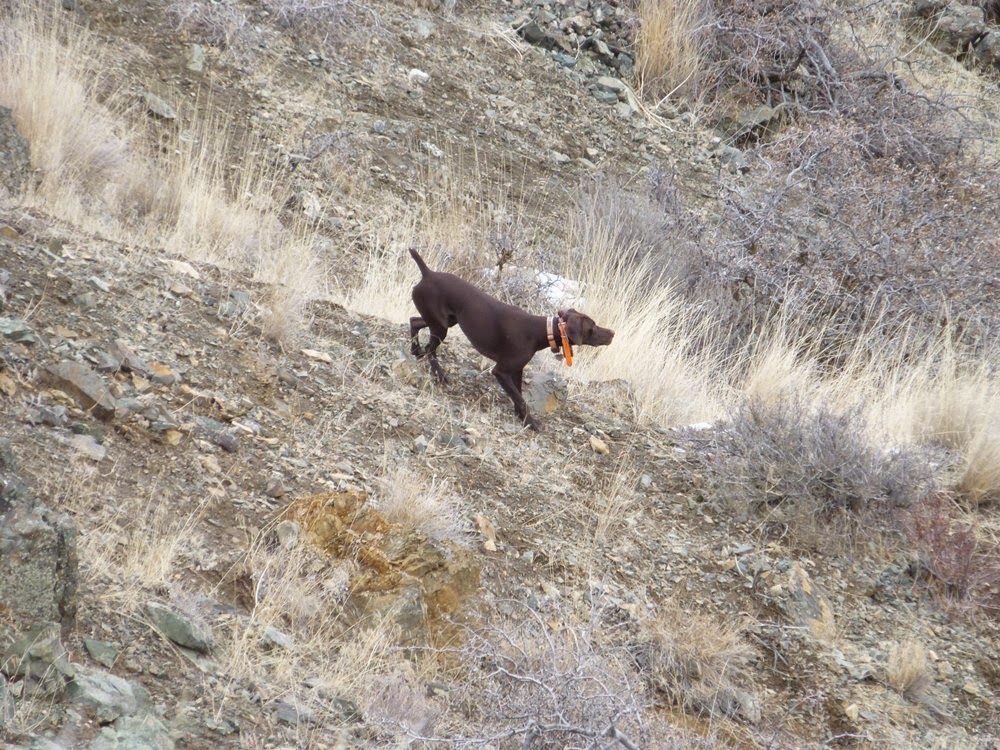 I was trying to get both Conner and Jake in the same picture but Jake didn't budge as Conner moved about twenty yards below him. Suddenly the birds busted from the slight cover they had and Conner shot. I pointed the camera at Conner expecting a second shot but instead got a loud exciting "I got him shout". 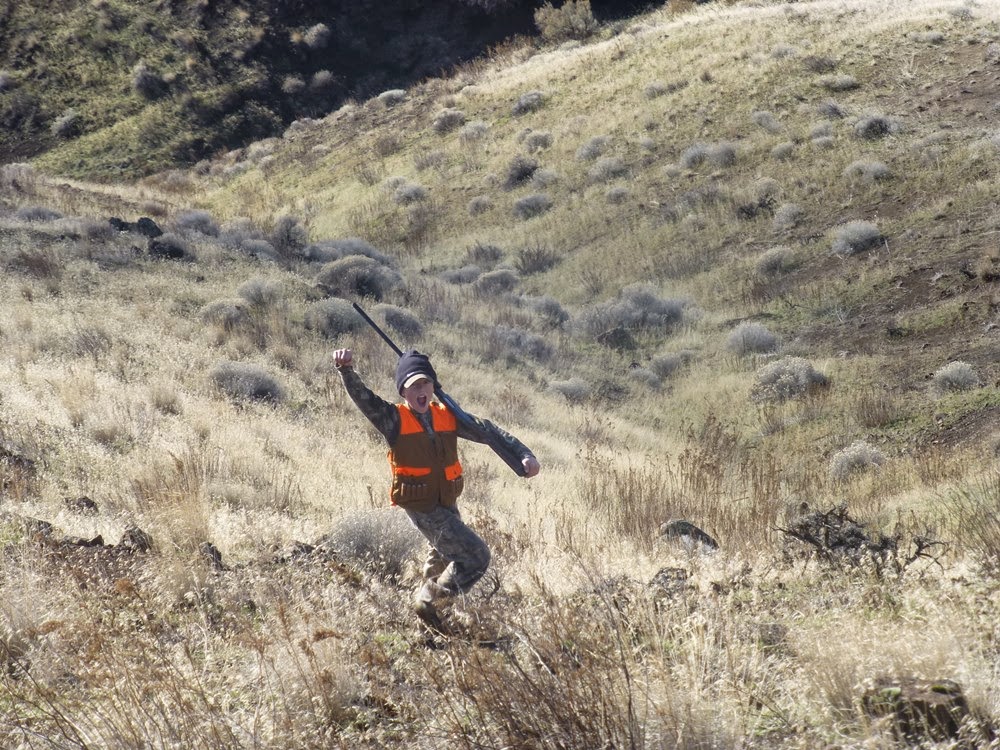 Like a pro, he directed Jake to the dead bird and Jake was proud to bring him the trophy. 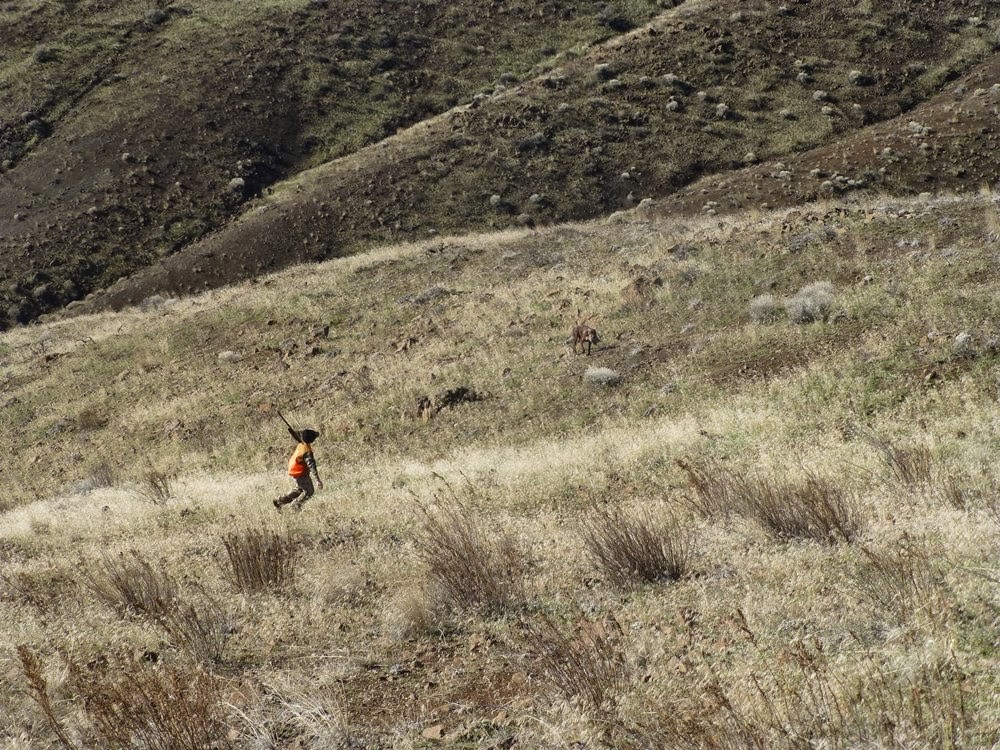 Proudly they display a great trophy. A bird that was definitely earned. 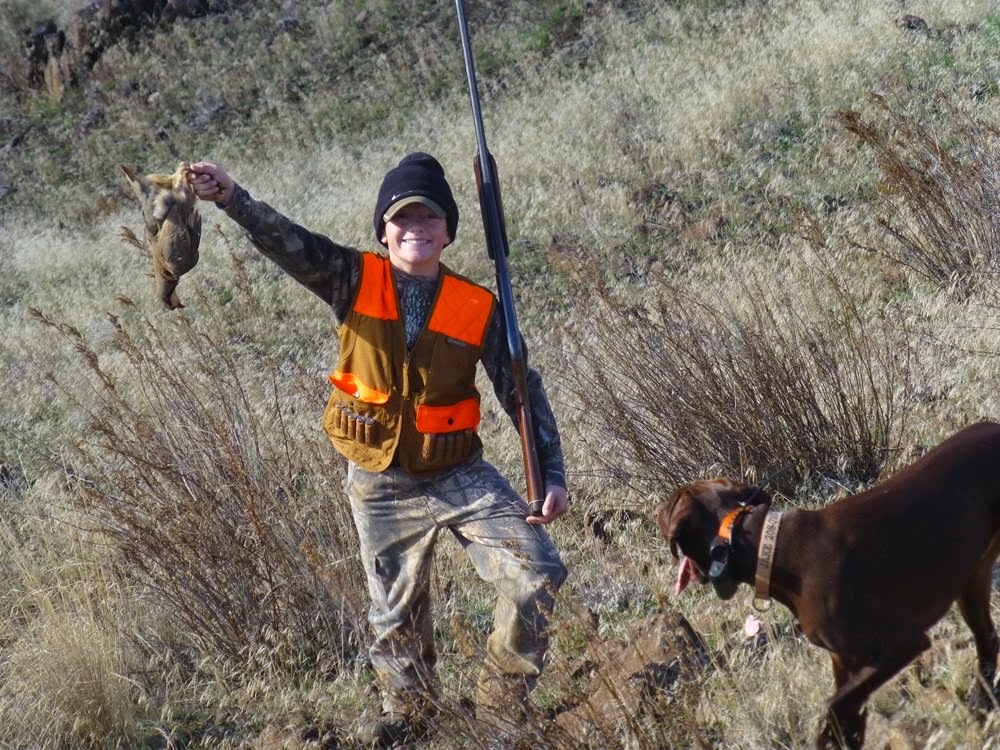 We still had a ways to go back to the truck and I pleaded with Conner to take the easy route back to the truck. He agreed and we rode his excitement back down the ridge the truck was parked on. What a way to start the Christmas week.

Posted by larry szurgot at 6:31 PM

Great stuff. For us that hunt chukars, we know he earned that bird.

You can't beat that smile either.

Congrats to both of you.

Larry, that is awesome! I've loved reading your stories this year and this one takes the cake. I too have experienced the same joy after being with Dylan a few times until he got his first chukar. Wow! Now that the first one is done, watch out! Enjoy your 2016.

Larry,
What a proud smile on that boy! So glad he brought one down. No doubt he respects the chukar. Merry Christmas to you, Connor, Jake and Barb. By the way, Mays is doing fine after the surgery. His food bowl and water has been moved into the living room close to his bed and fire. He wanted to go to the beach this morning so he was disappointed that he was allowed just a short walk. I do believe he is enjoying all the attention and turkey with every meal. However, there is medicine in that turkey so we are getting our way too. Great story Larry.
Alan and Mays

Love it! Trophy is the right term to describe almost all the Chukars I manage to get. Congrats to Connor and the rest of the team! 8 miles is a pretty good trek! Merry Christmas!

Congratulations to Conner and to you, Larry! He will remember that bird for the rest of his life. So will you. Now that he's got his first bird and he's going with you and Jake I'm worried about the combined impact on the chukar population!