There are few things I enjoy more than hunting chukars with my dog, but one of them is hunting with my dog and Conner. At thirteen years of age, Conner is more tuned in to the outdoors than most people are at 50. His young eyes are constantly pointing out animals, rock formations, and the chukars that are flying around a hill two hundred yards away. Things that I miss because my eyes are glued to the hill looking for the next obstacle that is going to try and trip me. At times, he almost seems like the teacher instead of the student. Yesterday was one of those times.

For our first chukar hunt of the year together, I let Conner pick the spot and he chose the area where he had shot a nice buck a month earlier. We had seen some birds on the deer hunt and I hadn't been back there since that day so I was willing to give it a try. The area didn't let us down. After parking the truck I let Conner pick the direction to go. 15 minutes into the hunt we were moving in on a point from Jake. I watched as Conner moved in on the point and was a little surprised to see the rise of a large covey of quail. It wasn't a spot where I expected to see quail and I watched as Conner fired three quick shots and dropped a quail on the third shot. He can fire his 870 wingmaster (20 gauge) faster than most people can shoot an automatic. I'm thinking maybe a little too fast, but who am I to say since he just dropped a quail and is shooting 33% already. Not too bad for a thirteen year old. Jake proceeded to get four more points on the quail as we proceeded around the hill and Conner picked up one more quail before we got into the chukars.

With some pretty good action in the first hour of the hunt I was thinking if nothing else happens from here we've at least seen some good dog work and Conner is having a ball. Than Conner started showing off. Jake's next point was on a large covey of chukars. I watched as Conner moved to the front of Jake and the covey rise. On Conner's third shot, I watched a chukar crumble to the ground and complimented him on a good shot. He excitedly let me know he had got a double and sprinted down and retrieved one bird while Jake retrieved the second. 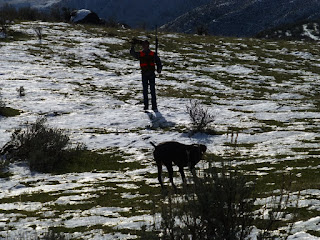 As Conner admired his first double on chukar's, Jake looked up at me wondering if the gun I had was being used as a stabilizer for walking or was for shooting. 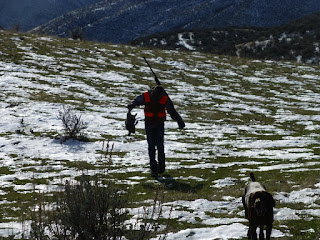 Last year Conner had a three chukar day and we were both excited for him to shoot one more chukar. That would be his best day ever chukar hunting with two quail added to his shooting. A little later the astro said Jake's was on point 241 yards down the steep mountain. We found him on point and once again Conner slowly moved to the front. As the birds busted his first shot found nothing but air but his second shot brought down two birds. Two covey's and two doubles. As many chukars in one day as Conner has ever got. I had a pretty happy hunter with me.

The day continued to show us plenty of action and watching Conner work with Jake was as rewarding of a day as I could have asked for. We had several more opportunities and although Conner's shooting percentage dropped back to 40 % or so he put two more chukars in his vest, which he insisted on packing.

As we got deeper into the afternoon we decided to head back to the rig and give the birds time to covey back up before the cool night temperatures set in. 6 chukars and two quail was a fantastic day for a thirteen year old and a limit of chukar's would have to wait for another day and maybe another year. That's a lot of good dog work and some good shooting.

Back at the truck I snapped the picture of his successful day. 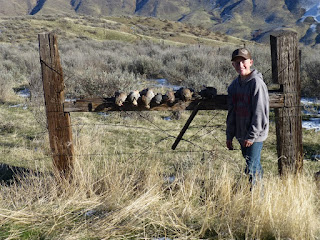 I then put my contribution on the fence with his, pointing out that I shot two for two today. 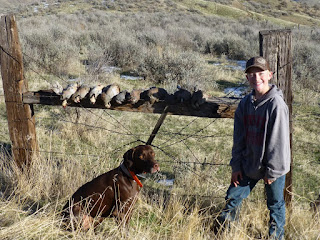 Grandpa has to still be best at something, doesn't he?

Posted by larry szurgot at 8:49 AM

Wow, what a wonderful day! I can only imagine how proud you must be!

Thanks David and Bob. It truly was one of my favorite days.

What a great day! Thanks for sharing it with us. Only one week left
Before heading north for us. We put 10,000 miles on the pickup, saw family and friends and did a fair amount of hunting. It was a good trip!

What an incredible day! Been following the blog for a while now and this is one of my favorite posts to read. Congrats!

great day Larry and Connor….best wishes for the holidays