Barb and I headed over to Brownlee for a camping and chukar hunting outing last week. We spent five days there and the best word I could come up with to describe my hunting adventures was "HUMBLED".

Yes there were plenty of birds and more country than I could cover in a whole season of hunting. My mouth was watering just thinking about getting on the mountain. It had even rained the day before we got there so conditions couldn't be much better. Also, for the first time I was using my four wheeler on the dirt roads to get me further in this year instead of walking the roads just to be passed by others. It was to be a dream trip for chukars.

Day 1 had me lower on the reservoir face. I figure on going in about 6 miles because I had covered most of the rest of the country in the past. Half way to my destination I caught up to a very nice Excursion which had the whole road covered. The doors were open so I knew the hunters couldn't be too far away. After hearing about ten shots a fellow finally showed up and let me around his vehicle, but not before telling me that this was the third day he and his three partners had driven this road and they were seeing more birds than they had ever seen here before. They didn't even have a dog so I was very excited about what was ahead. It wasn't long before I also flushed a large covey of chukars while driving. I parked and told Jake this will do. The birds flushed down towards the reservoir but I figured on heading uphill and finding the mother load of chukars. Within the first half hour Jake had three points on two separate covey of chukar and one of huns and I knocked a bird down out of each of the covey's. We kept going higher on the mountain into the great looking country. In the next two hours we saw one covey of chukar  which took off a couple hundred yards away and sailed to the bottom. After about 1500 feet of elevation I decided to head back down since the top of the mountain still wasn't in sight. We followed a different ridge down without seeing any sign of birds until we got just above the road. A large covey of huns surprised me with their flush and I fired two shots somewhere in the direction of the birds without dropping a feather. All was good though. The birds flew between the road and the reservoir and I knew there were more birds than just that covey. The next hour was the hunt I was dreaming of. Between the road and the reservoir was point after point. The elevation difference couldn't have been more than three hundred feet but Jake never found birds at the same elevation. I'd drag myself up the hill to Jake's point and than miss before he'd call me down the hill for another miss and than we'd repeat the process. I finally got to the road, took off my vest and laid my shotgun on it, admitting defeat. Jake and I walked to the two seat utv and returned to pick up my vest and gun. I don't know if the mountain beat me or I outsmarted myself by going high, I just knew I was beat.

A good night's rest cures all and on day two I decided to hunt a different area. Knowing the birds were low I zig zagged my way up the slope looking for birds. It was over an hour and about 1000 feet of elevation before Jake found the first covey of huns. As we gained elevation we found more and more birds but we also found the wind stronger as we gained altitude. We finally found what I thought had to be a chukar ranch with a covey on almost every little point. Why do chukars like those windy ridges? The wind is one more reason why we will never be able to extinguish chukars. They get up and are immediately a surface to air missile. I once again gave in and headed down to a more reasonable wind speed and found a some of the birds I had chased down. While searching these birds out I heard no more than fifty different shots across the reservoir on the Oregon side. Wow! What was I doing wrong?

When I finally got back to the truck I searched the Oregon side for the hunters. I found four hunters and dog's on this mountain. 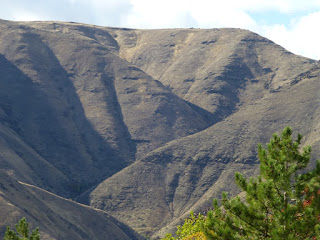 My hat is off to these guys and their dog's. There is no way I could negotiate that mountain and shoot. Not only could I hear than shoot but I could hear huge boulder's rolling down the hill and splashing into the water.

Day three was weather delayed by the rain. 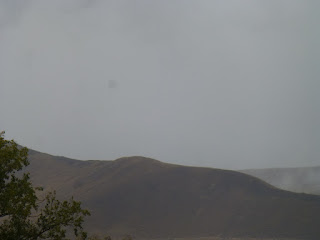 I waited it out, but it didn't leave until late afternoon. Once again there were four guys across the reservoir (probably the same four) firing away. Those guys are some chukar hunting stallions.

Day four found me high on the mountain again. The colors on the trees were beautiful and the chukars were there but so was the wind. 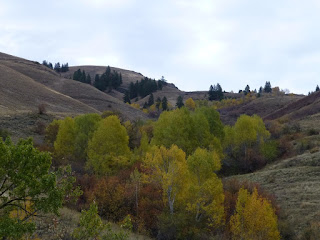 I consider myself a decent chukar shot and shooting 25 % would have made me happy at these mock 5 birds. Even off point they were 25 yards and moving away fast before I could even shoulder my gun.

Day 5 was a lot easier getting up the hill. I had Barb drive me up high and went higher from there. 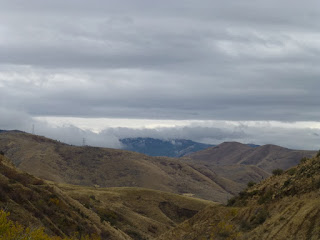 She snapped a picture of Jake and I before heading down. We both were feeling pretty perky for being that high on the hill already.

The wind was already blowing twenty miles an hour and increased as we gained elevation but the chukars were there. Once in a while we'd find a covey in a draw without much wind and would get lucky but for the most part we found them in the wind where swiveling the hips to shoot quick is a must and I don't seem to have that motion any more. After fighting the wind again for a few hours I decided to head back down where it might be manageable. Loosing about 1000 feet of elevation brought dead calm conditions. Maybe I had been hunting up in the jet stream? We found a few birds as we headed for our rendezvous with Barbara at the road but once again we both were whipped and ready for the truck.

Not far from the truck, Jake pointed a brush pocket with one of those weird points that said maybe he wasn't pointing birds. Sure enough, as I moved into the brush a larger object went running out of the other side. The very large black bear ambled down the hill towards where Barb was parked. The bear went straight at the truck with Barb watching with excitement. She waited for it to come up the side of the road but it never appeared. When I got to the bottom I investigated the disappearance of the bear and found a culvert right where the truck was parked partially covered by tumble weeds. I peeked down the culvert and could see no light. Confirmation was made when I tossed a rock into the culvert and could hear him moving about. I finally gave up on seeing him again after hearing Barbara telling me to "please get up here" from a partially opened window on the truck.

To sum up my hunt, there were plenty of birds and plenty of beautiful country to cover. This new generation of chukar seem to like the steepest slopes human's can encounter and obviously like to congregate on these steep slopes where the wind is strongest. They are gettable but you have to be tougher than me. They humbled me, but I'll be back for another round.
Posted by larry szurgot at 7:13 AM

Been there on the missing birds. I was humbled on the trip that I took my wife along and here I was supposed to offer her advice on her shooting. Jake looks mighty happy with you in the picture. Go back up those hills and get them Larry! Better rest up a couple days first. By the way, I told you to take Barb out to dinner and you end up taking her chukar hunting. Oh well, she did get some bear watching in anyway. Keep having fun Larry. Thanks for posting.
Alan and Mays