Yesterday, my grandson, Conner, called me and informed me that he had today off school and was hoping we might get a chukar hunt in today or this weekend. Being today was supposed to be the coolest of the three days, I opted for today and headed to Meridian this morning to pick him up and then headed for the chukar mountains. Shortly after sun rise we were on the hunt. Although we were hunting chukars, we hunted through a spot I have often seen blue grouse but Jake found no evidence of birds.

One and one half hours later we were out of the grouse country and looking for huns and chukars. Although it was a little cooler with the cloud cover, the dry soil was leaving very little scent for Jake to get excited about. Two hours into the hunt I was concerned that Conner might be getting a little bored. We stopped for a short break and he assured me that he was still excited to push on. Shortly after that Jake had his first point. 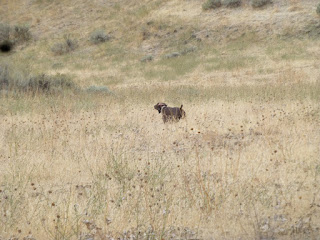 I backed off and took a few pictures of Conner and Jake and hoped for a decent shot. Earlier he had decided he wanted to shoot my 12 gauge Browning over and under and I figured, why not. I watched him move in on Jake's point and miss with the first barrel as they flushed but dropped a chukar on the second. 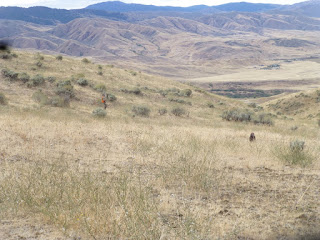 Jake immediately rushed in for the retrieve and although he wanted to bring the bird to me, he relinquished the bird to Conner. I was relieved that the ice was finally broken. 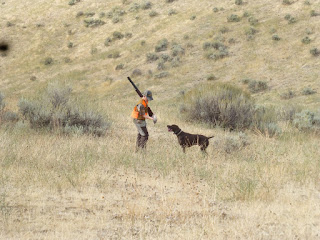 From that point on we were into birds. I was trying to both take pictures as well as be a participator. I soon found out I couldn't do both with any type of success. If I got pictures, I'd miss the shot and if I tried moving in on the point with Conner I was missing some possible good pictures. It wasn't long and Conner had bird number two. Once again with the second barrel. Jake was now starting to figure out who deserved the bird. 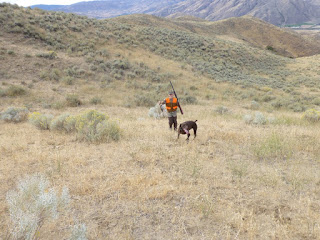 When there was a crippled bird he would bring it to me as though if it weren't dead it must have been shot by me. 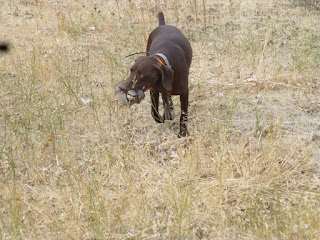 Conner's shooting remained good and when he shot a chukar with the first barrel and started showing it off to me I figured it time to put the camera away. 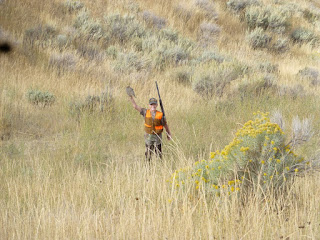 We remained on the hill for five hours and I can't explain how proud I was to watch my 14 year old grandson work with my 3 year old shorthair and almost accomplish his first chukar limit. He was one shy but made up for it by making a great shot at a hun. Jake was the pro I new he could be. At times he would let Conner 20 yards out front of his point before relocating and not once all day did he rush the birds. What a great pair to hunt with.

I also realized how hard it is for two people to hunt chukar over one dog. It's not like walking on flat ground. There's a good chance that only one is going to get the shooting and number two has to succumb to safety. It doesn't matter though. When it's your dog doing the work for your grandson, your chest starts puffing out with pride. Conner's take was his best ever for chukars. 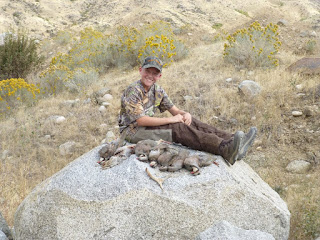 Although my contribution wasn't as good as Conner's, the day was mine. I was the luckiest man on the hill to hunt with these two wonderful companions. 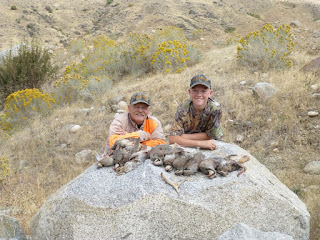 What a GRAND DAY.
Posted by larry szurgot at 5:27 PM

What a great day! Congratulations on your grandson's fine shooting and great dog work by Jake.

Thanks Bob. Conner is such a natural at everything he seems to do and Jake decided this was a good day to put everything together.

Super time with Connner....thanks for sharing. I did get a goat with my bow after 12 days of high country hunting so am back to birds but our pheasant opener near Malta was dampened by 6 inches of rain closed all but the highway and very limited where we could hunt.....with 3-5 inches of snow tomorrow so we tucked our tail and came home. The dog water bottles were unneeded so I had to laugh that it was too dry for Jake to scent well.

Congratulations Greg. Another super accomplishment for the over 70 club. Hope we can get together and here the story.

Good stuff. We all wish we could go back and relive what Connor is experiencing right now.
At least the hunting part; not high school algebra. Congrats to you for your mentoring.