Being an x high school coach you'd think I would know the importance of attitude in everything we do. In work or play success is preceded by attitude. I was reminded of that today.

Jake had the last two days off due to the cold weather and me being such a wimp. He let me know that he was ready for some action so I reluctantly got up early and headed for the mountains. The temperature when I left was 10 degrees with starry skies. I knew the slopes would all be frozen and hard to maneuver. The forecast was for snow somewhere around 11:00 and I figured on being on my way home by then, whether Jake liked it or not. What a sour attitude to start the day.

By the time I got to my hunting location, the rising sun didn't even get my hopes up. Heck, it was up to 18 degrees. As soon as I put Jake's collar on he made a quick dash up the frozen trail. I was hoping he would stay close to the trail because I didn't want to venture off onto the frozen ground very much. He didn't and I didn't. Going up the steep and frozen slope my strides were about 6 inches apart. I was thinking, "wow! this is fun". My Astro interrupted my thought's with a reading of Jake on point 231 yards on the other side of the draw. 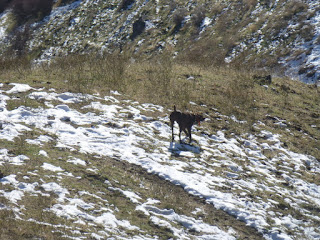 Reluctantly, I side hilled around the hill and came down behind and above Jake. Every step felt like I was going to go down until I got on the same ridge as Jake where the ridge was not as steep. As I moved to Jake's left the birds busted well within range but kept flying after I emptied both barrels. It was almost like I expected to miss. That was our last glimpse of the sum and the storm was moving in. We were about an hour away from the truck and I seriously contemplated going back but Jake decided in another direction. I watched him covering the slopes with ease and decided it was time to pull my head out. This is December 8th and it might not get any better than this so I'd better get my act together. Soon the snow was falling and the ground was turning white. At first it made the hill slicker but after a while it made the traction better.

In the next hour, Jake had three points with no birds. I found fresh tracks in the snow but they evidently flew wild. I was finally taking almost normal steps and didn't feel like each step might throw me to the ground. The next point was the way hunting is supposed to be. Jake locked in some sage and I was confident there were birds. 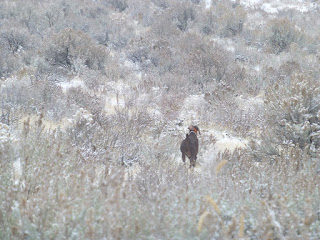 I moved to the front of him and birds flushed everywhere. We somehow got right in the middle of them. As the gun fired twice, two birds fell, and for the first time this year two more chukars stayed long enough that I reloaded and got both of them. Not only was I tickled with my shooting, I was super impressed with the way Jake followed my hand signals and retrieved every bird quickly. It was a quick reminder as to why I enjoy being on the mountain so much. 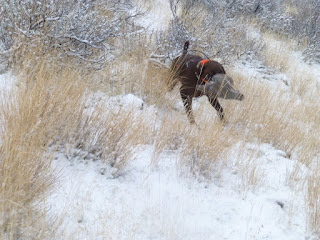 I was now super charged and ready to handle whatever the mountain had to throw at me. Jake and the mountain were real kind to me and made the rest of the day a real treat. We had four more points as the snow kept falling and we were in an area that didn't conceal too many rocks. 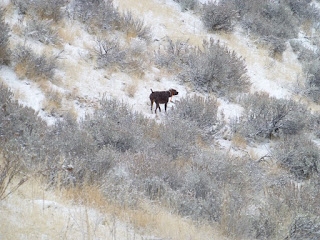 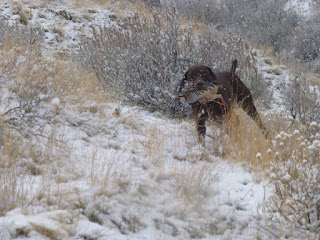 Posted by larry szurgot at 7:13 PM

What a great day it turned out to be! A limit in crappy conditions! Good for you. Next time you're out on a schoolday and have a bad attitude, think of me locked in the classroom looking out the window longingly at the Hells Canyon breaks!

stay after them Larry and Jake

Thanks for the report and good work for both you and Jake!
I reluctantly left Idaho on 12/2. Arrived home to -22 f. Not much chance of doing much outside except replacing the frozen battery in the plow truck.
I had a hard time with shooting this year, but managed to hit a few. Annie did her best ever although we did not find the bird numbers you and Jake often do. It was great fun and I look forward to next time.
Larry

Dang Larry you are an animal....that is a compliment from someone who admires our favorite anima....our dogs run up and down frozen slopes without a care. Still down here in so az where quail are often on steep rocky slopes but it is 72 today and certainly not frozen.

Good effort Larry and Jake!
Coach Al and Mays and the Setter

Thanks to all of you. I can't tell you how many times I get knocked down for one reason or another on the mountain and Jake and my fine companions of the past have picked me up and made it fun. I hope someday I can put it in words to how impressive our hunting dog's are. I'd like to take credit for my success but it truly has been the ability of my canine partners to put me in the right spot.

It's not your aptitude that determines your altitude in life, it's your attitude!