I just got back from my final 2016 hunt. It was the most disappointing hunt of the year. Not because I didn't get any birds or lack of points from Jake but because where my mind was. I really didn't plan on hunting today but was compelled to check out the conditions of the wild game. The country I was hunting is usually full of game. This is where we were heading. 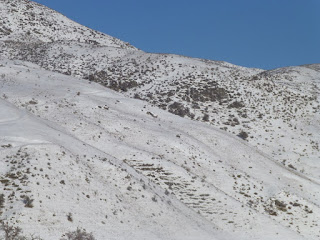 To get there we had to walk an old road about a mile and gradually climb about 1000 feet. The whole way in we could hear the chukars calling us from above and Jake busted a couple of covey's way out of range. This eagle showed little concern that Jake and I were on his mountain. 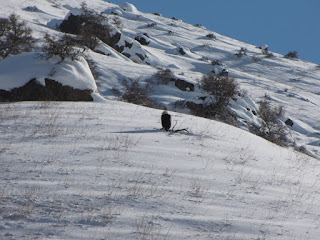 I had at least a dozen long range points 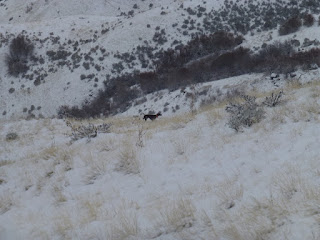 with some of them so far out (325 yds.) you have to really search to find him even on zoom. 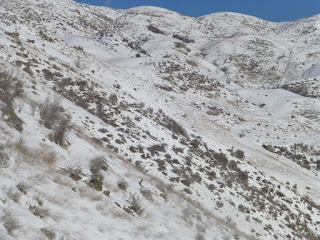 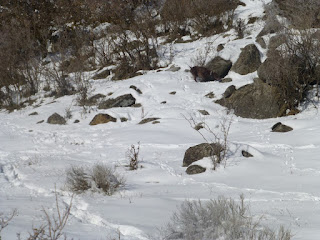 We saw two deer in the 2 1/2 hours on the hill but by the tracks on the road below there were plenty around. 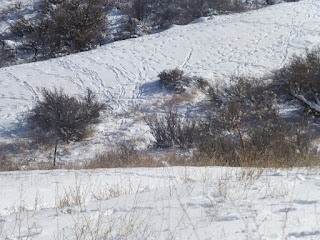 This brings me back to the point of why today was my most disappointing hunt of the year. It had nothing to do with the day but a call I received a couple of nights ago. Another chukar hunter who I know just through the blog called me and asked what I knew about the Idaho Chukar Foundation asking the fish and game to close the chukar season. I had no knowledge of it, but decided to look into it and got into the foundation's blog and found it was true that they were recommending it. I put my input in and before the next day was through Drew and I were comparing ball size and it ended up with me being a mouse.

I stand by everything I said in his forum, which in short was that all chukar hunters should have a saying and not just an elite few with self resumes that says how much they do for wildlife. I think everyone should look at his site and make their own determinations as to how they feel and let him know. Maybe not get in as deep as me but let him know your voice.

With that being said, I have decided to stop posting for the rest of this year. Barb says I'm getting too emotionally involved again as I did 8 years ago. She's right, and I'm gonna put the camera away and concentrate on Jake and I enjoying the outdoors the way it is supposed to be. Those of you who like reading about chukar outings should tune into Bob McMichaels Chukar Hunting blog. He still keeps it fun and has stories and pictures that make many of us envious. I hope to meet him and Leslie this year.

Meanwhile, stay posted this spring. Who knows. Maybe I'll be announcing ticket sales for the premier boxing match of the year. We could turn the proceeds into one of our favorite charities. It's sure to be a comedy special if nothing else. Can you imagine the speed of the blows of two men approaching their 70's. It will be bone crushing.

Posted by larry szurgot at 2:20 PM

Biology says hunting will not affect chukar populations to much of an extent. 70-90% of all chukar alive in August will perish by nesting season next year, hunting or not. There are many areas that see very few humans and those populations fluctuate just like areas that have access.

Yes tough winters can have an effect, but we all know that hatching conditions, habitat and summer conditions are far more important to chukar populations than 12" of snow.

Chukar can lay up to 40 eggs in perfect conditions per a Nevada biology report I read years ago. Not likely that number in the wild, however I counted a hen in July in oregon that had 28 chick's all following her and the exact same size 3-4" tall.

The chukar foundation should stick to reporting goose poaching and putting out water systems in chukar hunting areas that lack water and not trying to dictate what the game department should do. I've met the wardens and biologists and they are knowledgable.

And you should continue to entertain us hunters with your awesome blogs. Nevada is basically the chukar capital and they don't close season based on snow. South and North Dakota have insane winters and the upland birds thrive, due to habitat and spring conditions.

Stand your ground and keep blogging.

Keep up the good work! As an Alaskan that is lucky enough to spend 100+ days a year hunting upland birds in Montana, Idaho, Oregon, and Nevada I value your work. It brings me a lot of joy sitting at our lodge (in Bristol Bay Alaska) in the summer waiting for my guests to return having a glass of wine and reading your work, dreaming of the upcoming fall.

As far as this issue is concerned...I am in on hold here in Eagle River, AK waiting for a thaw in either WA, ID, OR, NV, or Utah to run my dogs. I know I can go out there and smash them now, but I am not mad at the birds...I think I am not alone.

Just my two cents, and thanks for all of your work! Running dogs is way more fun and no doubt more rewarding than the blogosphere!

Nice eagle shot! I saw one on a lame hunt two days ago and it turned my sour attitude around.

Mark, thanks for the input. I've heard pretty much the same stats. The quail at my house prove those stats. every winter we have about 100 quail feeding around here and by nesting season you see very few. These birds aren't hunted. Winter comes and the numbers are back up to where they were the winter before.

Alaskan Anonymous, Wow! 100 days a year hunting upland birds. I thought I did great at averaging 60 days a year. As far as eastern Oregon and western Idaho you're going to have to wait a little longer for the thaw. I was over at the Oregon side of the border today and although Jake covered some big country and found lot's of birds, it was the best I could do to get about a mile up the hill before having to turn back. Cold and about a foot of snow on most slopes.

Greenneck, if you like seeing eagles, drive along the Brownlee road. I'll bet I saw close to 30 different eagles today.

Thanks for the input! Hoping for the south sides to melt around Lovelock, NV, and maybe around Wendover, UT...

We have until the 8th in NV, and the 15th in UT. I spent to much time at our place on the High-line in Montana this fall and missed out on your good bird year! Don't know your country like you do, but manage to stumble on a few when I get down there. More about the dogs (4 GSP's) for me anyway...but I don't mind a shot now and then;)

Thanks for your blog! And if you ever get up to our neck of the woods in Montana look me up.

Larry, I agree with you that Drew's request was premature and not well thought out. I pulled what harvest stats I could and the 2011 winter was a hard one. The subsequent fall was the highest harvest in the last decade.

I think it is human nature to want to have something done. I think in this case it was a bit of overreacting on Drew's part.

I love your blog so keep blogging.

Thanks David. I love passing on my experiences in the outdoors and just hope everybody enjoys the outdoors and some of my experiences as much as I do. I have been very fortunate to have had the perfect wife and family for 42 years to allow me to spend so much time doing what I love. I also have been lucky to have the best canine partners in the world. I will be back blogging and hoping everyone can enjoy the outdoor life as much as I do. I am definitely not the greatest outdoorsman but I defy anyone to say they have more fun than I do. Good Luck on the rest of the season.