Looks like we got our white Christmas this year. A little more white than these old bones like, but there are lot's more people that are loving it right now. As far as the animals, I'm sure most of them aren't caring for this last storm that dropped another 6 inches of snow up here at my house. The quail are enjoying the warmth of my porch 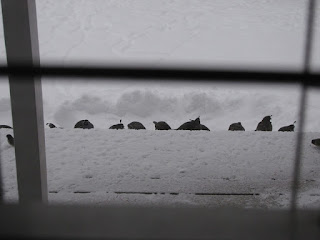 and the deer don't mind looking at me through the window as long as I leave them a little food. 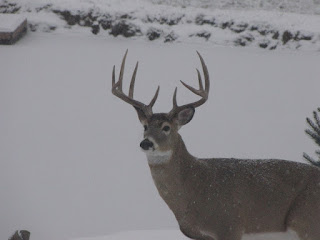 It looks like we have another cold spell coming through after Christmas that will keep the snow around for a while. As long as we get some sun shine, the southern slopes will be where the game animals will congregate. The problem for us chukar hunters is getting to those slopes. Check out Bob McMichael's "Chukar hunting" post and see how the tough guys hunt with snow shoes. With this last storm it may be the only way to get to them.

I'm glad I got out a couple of times this week before the big stuff came. I could still negotiate the slopes enough to get to the higher burnt off ridges. The two spots I hunted this week looked like this 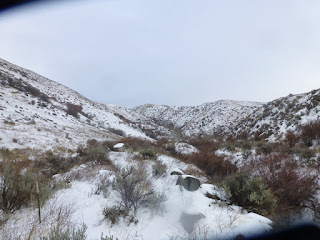 going up but opened up and was more negotiable towards the top. The problem for me was having enough energy to keep hunting once Jake and I reached our destination. The frozen ground under the snow made for some exciting approaches to Jakes points. 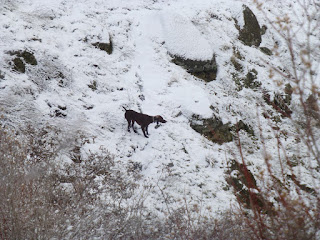 Even though the birds were holding pretty good my shots were usually from a compromising position and Jake would watch the birds fly across the hill untouched. I could go on and on about this weeks hunts but I'll keep it short by just saying I was on the ground as much as I was walking upright, but it was worth it and somehow fun. Here's a few of my pics from our snowy hunts. 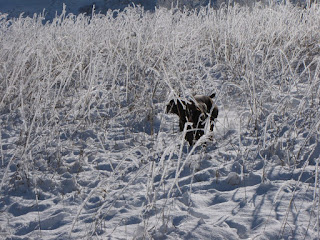 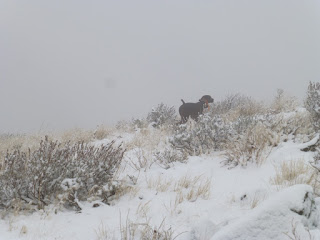 One of those long points that you know the birds will probably bust when you are about 50 yards away. 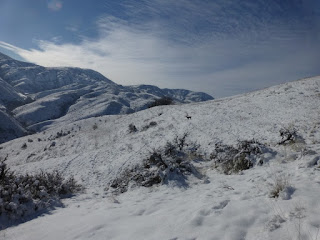 A retrieve that makes the side hilling worth the effort. 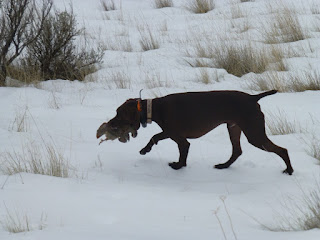 The kind of ending that makes me proud of such a wonderful dog. 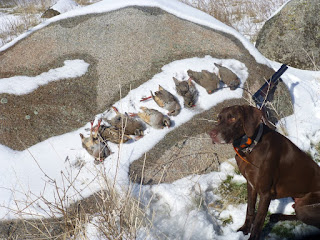 Another day of great dog work. 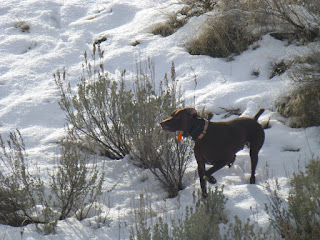 with plenty of action. 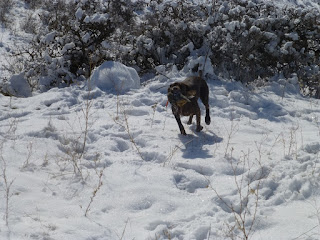 And more birds than I probably deserve. 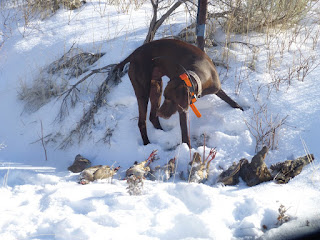 Merry Christmas to all of you and here's to hoping 2017 is the best year your dog's have ever seen.

A short P.S. We took a Christmas Eve hike and I found that although Jake likes to point turkeys 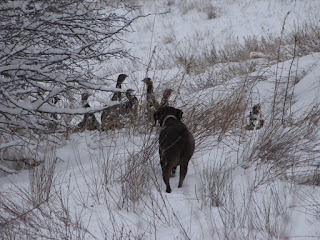 he wasn't as excited about me doing the flush. 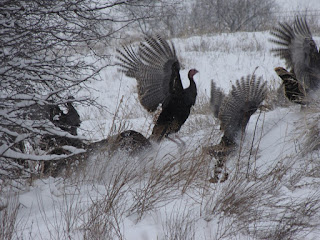 Maybe he was afraid I might shoot one and he'd have to try and retrieve it.
Posted by larry szurgot at 9:38 AM

Man o man! What a feat to limit (two times?) in that kind of snow! What fun. Nothing better than being out in that with your beastie bestie and getting close to that many birds. Great job!

Thanks Bob. Jake and I just took a short walk about and he likes pointing turkeys in the snow also. I wonder what he was thinking as they took off?

Merry Christmas Larry and Jake. I enjoy your blog! Always amazed at your success. Larry

Thank you Larry. Our success is attributed to how many times we are in the field. Those unsuccessful days don't picture to well and you know that old saying "even a blind squirrel finds an acorn". Merry Christmas.

Wow, Larry you are just warming up for another month of snow hunting......take your SPOT locator or give Jake your truck keys in case you cant make it back. Making me feel guilty about walking around in AZ behind Lucy where a 200 ft hill is a biggy.

I grants loans between individual. contact me by my email:

I'll give you the requirements when you write me.
Kind regards