The schools have been getting a lot of snow days this year and rightfully so. The snow has stayed on the ground for a long time this year with the cold temperatures. This is the first January in over 30 years I have not hunted. Even three years ago when I had my left knee replacement on Dec. 8th I got out four days in January. It's been really tough for Jake. The snow is so deep that we haven't really even got to do much hiking. We have been getting into the chukar country when the roads permit and Jake at least gets to see some birds.

Up until yesterday Jake couldn't get much more than 20 or 30 yards off the road before he'd return through the crusted deep snow to clean himself out on the edge of the road where at least his back side was out of the snow. Yesterday Barb, Jake and I took a snow day and went west. I got a new camera to replace the one I left in Stanley this summer and wanted to test it out. We got some short hikes in and found a lot of fun things and even though we weren't carrying a gun Jake got some action. Maybe too much action. By the end of the day he was yipping at chukars running up the hills. 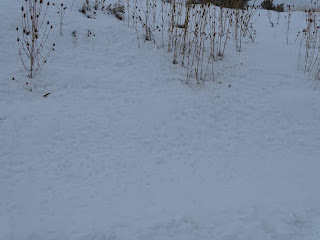 They were utilizing every type of food imaginable. 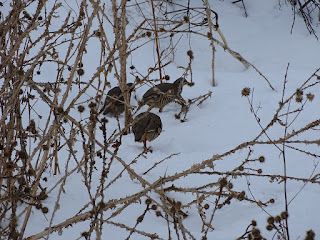 They were teaming up with other wildlife to get their daily meals and for the most part looked very healthy. 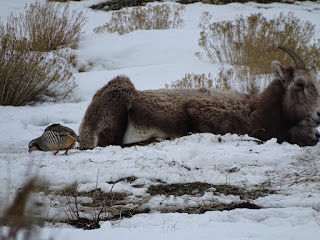 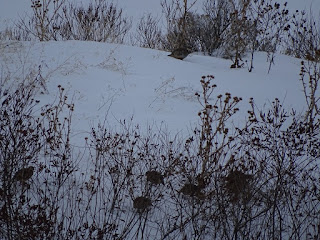 By the end of the day they were gathering into covey's for the night. For those of us who are still hunting until the end of the season, try and get off the hill a couple of hours before sun down. The birds need time to covey up and stay warm during the night. 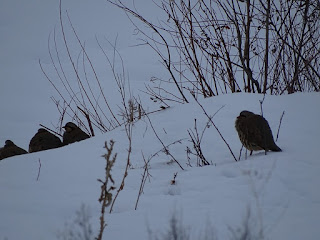 As I mentioned, the birds for the most part looked pretty good, but there were a few places where the snow had not receded at all and birds were on the road and not looking quite as healthy. 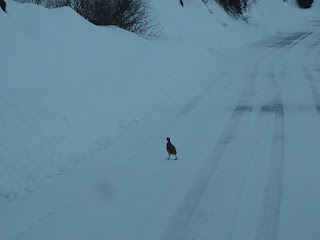 Several places Barb and I came upon evidence of predators from the sky, such as remains of a chukar 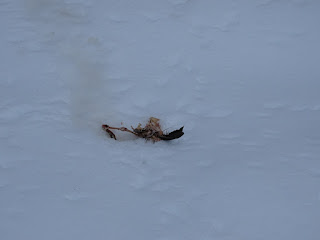 and piles of feathers with big bird tracks all around them. 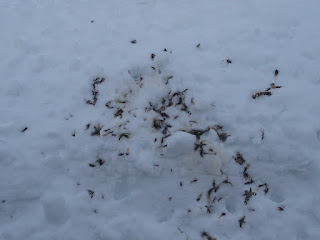 Barb and I watched several hawks and eagles diving on chukars and at times it seemed like they were working together with one bird diving to make them fly while the other birds hovered above waiting to dive on the fleeting bird. I tried to capture some pictures but wasn't fast enough to get any decent pictures. This red tail looked at us like we were intruding on his territory. 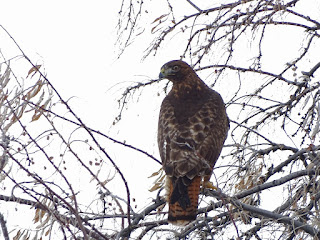 This golden was enjoying his meal from a distance. 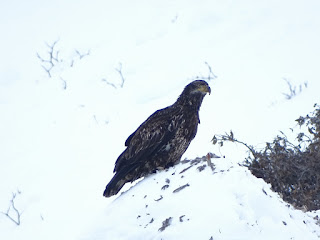 Most of the animals were in that lethargic mode and were pretty calm as long as we kept our distance. 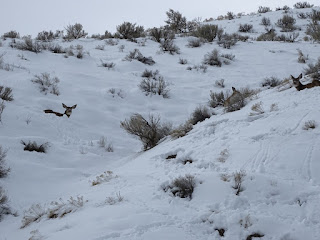 The deer, elk and sheep we saw all looked healthy and should come through the winter pretty good unless we get another long stretch like we just had. A little sun on the hillside would sure help some. Even though the animals look good we still found some evidence of nature and how it culls out the weaker animals. We couldn't tell how this animal died but could see all the animals that benefitted by it's death by all the different tracks around it. 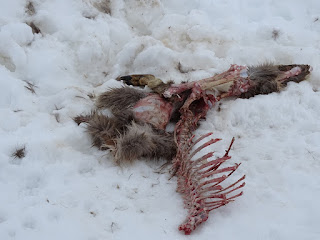 It was a great snow day for us. We got to see lot's of fun animals, I took a lot of pictures, we got some exercise and we found some country that might be huntable before the season closes. 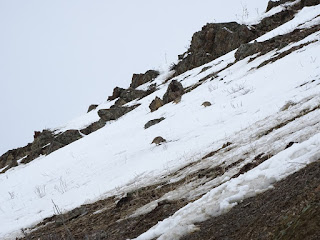 Getting the birds to hold or staying upright might be difficult but it might still provide us with the opportunity for a few more outings. Jake also had some fun on the hill. He got to point some chukar when they weren't running on top of the snow and straight up hill. 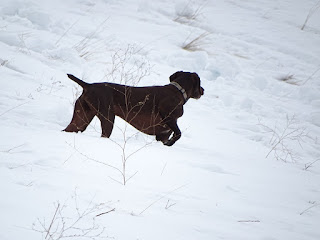 He also got to watch them fly straight over the top of me and was glad I didn't have a gun. The snow was so deep in places he'd have to dig a dead bird out. 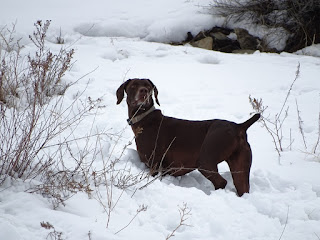 God, I love being out on the mountain with Jake. Having Barb along was a plus. I can't wait until this snow recedes enough for some great jaunts. If it's during the chukar season, great. If not, that's all right too. I wasn't made to sit by the fire and talk about the outdoors. I was made to experience it. My dogs have been the force that drives me further up the hill. Their exuberance is like a drug that get's me high. There is only one cure for me to get over this cabin fever and that is Jake on the mountain with me. Just like my dog's of the past have done, he'll make me feel like I found the fountain of youth. Even if at times he runs across the hill yipping at flushing and running chukars, he's still my drug. 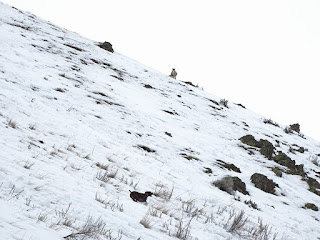 Posted by larry szurgot at 8:47 PM

Great story. I feel the same way when I am out there just me and Booger. I am very antsy to get a few last hunts in this next week. Your columns really get me going. Thanks. Wick

Looks like a tough winter for birds and hunters alike.

Can't imagine you see many hunters out because they are all down here in AZ......lots of northern tier state license plates. Our quail locally are down this year are down which keeps the locals home but the out of staters like myself come for the for-sure- sun and hope for birds. Some mega vagabond bird hunters went to Texas where bobwhite are having a banner year or New Mexico where the scalies are doing well too. The chukar hunting training here pays off because if you go steeper and deeper you can still find virgin coveys.

Here's hoping a warm spell takes some snow off in your favorite chukar spots...greg

Thank you Wick and Greg. 32 degrees and sun shining today. A few more days like this and we might get a hunt in yet. Greg, knowing how you hunt, I'm sure you'll be getting into those virgin coveys that no one else can find. Just follow Lucy.