For the past 18 years I have started the season with a new hat. Team Tuckota began on Dakota's first hunting season. He was Tucker's son who had just turned 4. The two of them became the best hunting team I ever hunted behind and thus the name Tuckota. Jake proudly carries on their tradition but does it solely. He is the only shorthair of mine that has not had a canine partner to share the duties with. 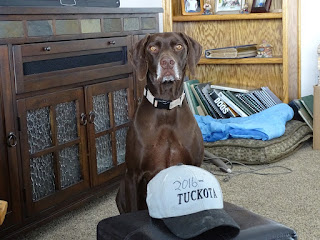 Since yesterday was our last hunt of the 2016-2017 season this hat will go on the rack with the rest of them. 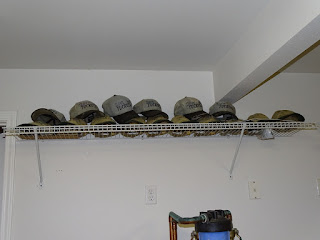 There is a lot of tradition and enjoyment in those hats and the journals I have kept over the years. 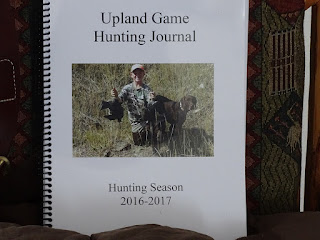 Although Jake and my hunt yesterday was successful it was hard enough that it discouraged me from making another hunt today. I don't know if it was because this was our only hunt for the month of January or because of the deep snow but my legs and back were as sore as I can ever remember.

A mountain lion hunter I met this year told me of some slopes I might be able to get to by walking on top of his snow mobile tracks into the area. Although tougher than walking on dirt slopes it was easier than walking on unpacked snow. You can barely see the road (trail) the cat hunter made on the far hill in this picture. 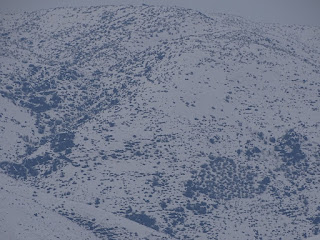 You can also tell why he finds lion tracks in the area quite often. This was the bare slope the trail led me to. 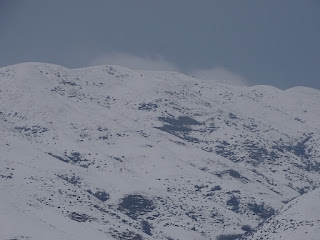 After getting there I found the slope not quite as bare as I had hoped. The chukar tracks kept me excited though. They were everywhere but it was impossible to tell if they were fresh or not because the snow had been on the ground so long. Jake had no problem covering the country because most of the time he was on top of the crusted snow. I wasn't so lucky. Some of the time I could stay on the top for three or four steps but most of the time I was breaking through half way up to my knee or further. The birds were running up the snow covered mountain everywhere I looked and Jake was often on the chase. It wasn't the right thing to do but I shot a couple of the flushing birds out of frustration. I ended up getting several birds off point and Jake had a great day. It almost seemed like he knew which birds were runners and which would hold. This was his last point of the day and it produced a double for me. 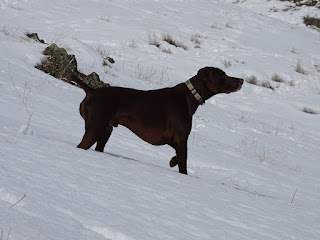 It was one of those classic points that looked like it was scripted and we were getting close enough to the trail that I bagged the retrieved birds and headed down.  although Jake had only covered 12 and 1/2 miles to my 3 and 1/2 I could tell he was tired also because he never got off the snow mobile track on the way down. I looked for a good place to take a picture of Jake's success and found it fitting to take a picture in the snow. After all, that's where we spent 90 % of our time getting the birds. 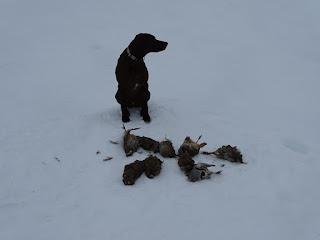 Although this was our only hunt in January this year, the season was a great success. We saw lot's of birds most everyday we hunted. I got out on 44 chukar hunts and hunted 36 different areas. I hunted one place three times but stayed pretty scattered out thanks to the number of birds. Yesterday I saw probably close to 150 birds and although most of them will be dead by nesting season the ones that survive should go into the season healthy by the looks of the fat on the birds and amount of feed in their crops. 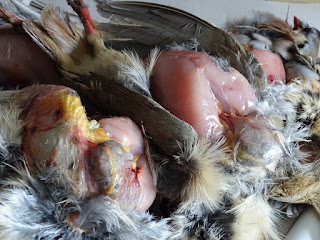 Let's hope for another good spring and summer for the birds.

Posted by larry szurgot at 2:41 PM

Gentleman from Tennessee just dropped back in to say Thanks Larry...enjoyed sharing your season anlook forward to a bird rebound as you predict. JC