A lot of weather and a lot of chukars

Days like yesterday usually keep me bayed up at home but with a 15 year old grand son that loves to hunt and still has school and other commitments I figured I'd better chuk up and head for chukar country. Unlike me, he gets only so many opportunities and we'd better take advantage of every one.

The drive in was cloudy and showed promise to a better day than the forecast showed and even though the wind was a little stiff we started finding birds soon after we began our ascent. 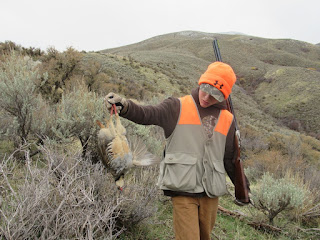 We had both bagged a bird before the clouds started rolling over the hill and the rain started. It wasn't long before the rain turned to snow and the hillsides changed in color. 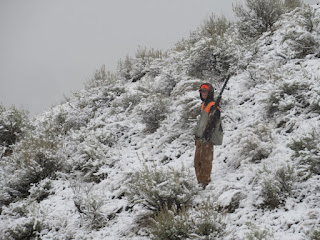 It was coming down hard enough that I put my camera back in a baggie to keep from ruining it but had to take at least one picture of Conner approaching Jake on point before doing so. 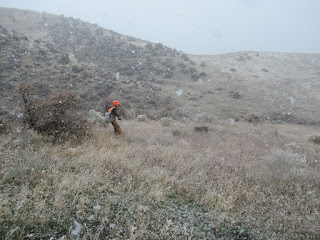 There were a couple of wild times when Jake chased the birds up for whatever reasons but he had a lot more great points than he did mishaps so all in all I was pretty pleased with his day. I don't know where all the birds came from but we were in birds most of the time for the five hours we were on the hill. At first the comfort wasn't that bad but as the snow got wetter so did Conner, Jake and I. Not wearing the proper garb our gloves and pants were now soaked and our hands were not feeling as well as usual, except for the feeling of cold. With Conner along, that didn't seem to matter. 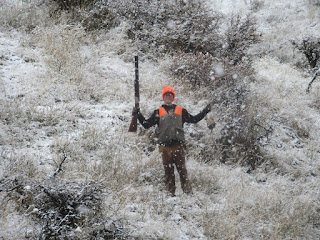 Also the number of chukars we encountered help to keep things a little warmer. I'm not exaggerating to say we saw over two hundred birds in the seven miles we covered. We saw several of the covey's more than once but all in all we saw at least 200 different chukars. we never saw one covey of huns and it is an area where we have seen huns on past years. I finally convinced Conner we should count our birds and head back for the truck. We had five birds each and a lot of new country to hunt on our way back down to the truck. 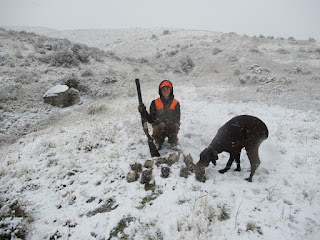 The new country on the way back to the truck found chukars as plentiful as the ridge we went up and with some good dog work we both shot our remaining 3 birds before heading more in a straight line for the truck. We kept the guns loaded in case we found some huns but it never happened. Jake must know how to count also because he started hanging close and stopping when we would to sit and shiver. He was a wet and cold dog. 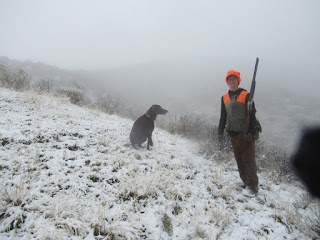 We stopped for a success shot before getting to the road and by then Conner was shivering also and talking about the warmth of the truck and hurrying down to it. 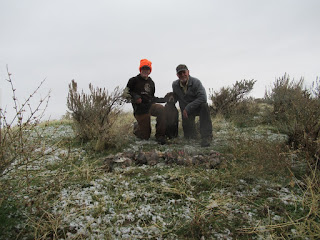 It ended up a truly great hunt with Conner. Putting things in better perspective we counted empties when we got home and we only fired 26 times to get our 16 birds. Not bad for an old man and a 15 year old kid.

A side note on the chukars we got. Most birds were first year birds. Although some of them were mature many of them were from late hatches and barely the size of a large hun. The sad thing about those birds is that they had little or no fat reserves yet. The larger birds were fattening up great but these young guys haven't had enough time to build fat reserves and if we have any kind of a rough winter will probably not make it through the year. It's just the way mother nature works. Somehow she will take care of us and keep chukars flourishing for years to come.

I believe it was the age of most of the birds that has been keeping some from finding many birds and now with scenting conditions at an optimum people should be finding more birds on their hunts. Good luck.
Posted by larry szurgot at 8:51 AM

Those are the days to remember. Grandson, dog work and plenty of birds. Doesn't get better than that.

Well Larry, I'd say Conner is one lucky grandson.....and there must be some shooting genetic trait passed on too. Dang, had planned on making it down your way once I got an elk in the freezer. It took me longer than I wished to get one down and now have to wait a bit to cut it up and get it into the freezer. And then in the retrieving exercise I dinged my truck getting across a small draw all chained up in 18 inches of snow that has me scheduled for some body work soon. And then another part wearing out means cataract surgery in a week. And then about thanksgiving time we are off to AZ. Huns and sharptails have been decent here, but still miss poking holes in the sky down your way. Lucy found a coyote snare but luckily got her thigh that didnt do much damage but are committed now to carrying cable cutters. She howled in pain but wondered if she would have made much noise if it were tight around her neck?