With winter getting closer, Barb and I decided we'd better get at least one more camping trip in before the snows come. Little did we know that we would have such great company to share some of our time with. We spent four days at Brownlee and met several other chukar hunters and great dogs. I had heard some discouraging reports about the bird numbers, but was encouraged when we reached the campground and saw a familiar camper with three brittanies sitting out front. I'd never met Orlin ( I believe that was his name) until this trip but he and his pups have been there every year I can remember and that was a positive sign. He was from Mackay and knew how to find birds.

My first day of hunting started with Jake and I high on the mountain and in the fog. It didn't hinder Jake at all and he was soon on point about 200 yards in the fog. Luckily for me, the fog lifted quickly and Jake and I were on covey after covey from that point on. Most of the covey's were huns but I thought to myself, "if this is low numbers of birds then you'd be through with a limit of birds the first hour on good years". We were having a ball. 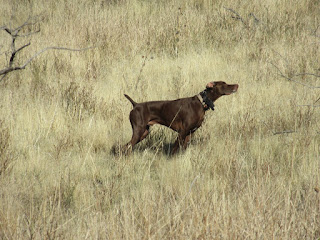 Day two began the same as day one but in a different location. We hoped to find more chukars but sot rained out about two hours into the hunt. We found birds but got soaked doing so and quit early to get back to camp and warm up. 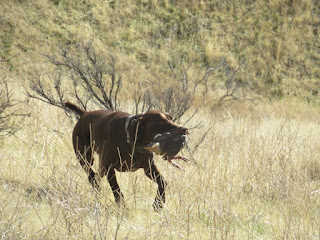 Back at camp was a new camper parked close by and I recognized the Alaskan license plates as a correspondence through the blog and was excited to swap some stories. We had met one other time but had never been able to swap tales. We visited through the evening and decided to go up on the hill together the next morning and split up from there. I'm always excited to watch another guy work with his dog on a chukar mountain. From a distance I watched Larry and Annie work and was treated to a distant point and retrieve by Annie. The stories of their success were great on the ride back to camp. 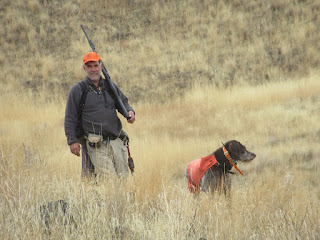 What a treat Larry Semmen and his Griffon, Annie. Thank you for coming by and showing your stuff. On our ride back in the side by side, Larry mentioned he saw a guy hunting up that way with two dog's and I shouldn't have been surprised when we found Greg Allen back at the camper. He had missed our departure in the morning and decided he would hunt up towards where we were. Of course he and his two girls, Katie and Trudie picked up all the covey's we had driven past and now was back at the camper with his birds and dogs. 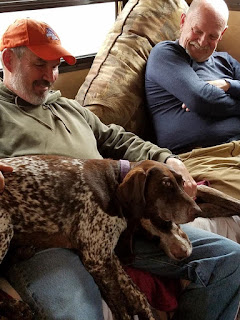 Greg is one of the best hunters I know and our families have a long history, so there was plenty to discuss. As you can see, his girls are pretty mellow after a long days hunt.

Shortly after Greg and Larry left there was a knock on the camper door. There stood Brian Dirks another chukar hunter from out of state that I met through the blog several years back. We met, camped and hunted together a few years back. He is also a GSP guy and besides chukar hunting together we shared a few stories of losing great dogs. He, like the rest of us, treats his dogs like family. In fact, Brian brought his new family member into the trailer to meet Barb, Jake and I. Tigger is a beautiful 13 month old young lady with tons of energy and never stood still unless it was to give kisses and sit on the back of the couch cleaning your ears. The next day was to be her first chukar hunt and Brian was excited to see what was going to happen. As Barb and I were headed home we were excited for Tigger and Brian when he sent us this picture of her first chukar retrieve. 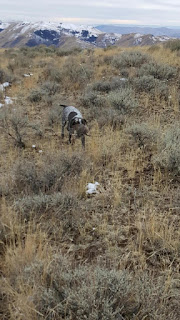 Larry and I rode up the hill and hunted our separate ways on day four before we met up and headed back to camp. We shared our success stories, shook hands and headed home in different directions. It was one of the best camping/hunting trips Barb and I have had in a long time because of the great company these guys provided. I hope to get with all of them again in the future. I encourage anyone else that sees my truck or know I am going somewhere to please stop by. Anybody that loves dogs and chukar hunting has to be good people.

This last picture is a rebuttal for those who say there aren't many birds this year. In four days, Jake logged 81 miles and I logged 26 miles and enjoyed every step along the way.
This was our take for the trip minus a couple of birds we ate and the birds from day four. 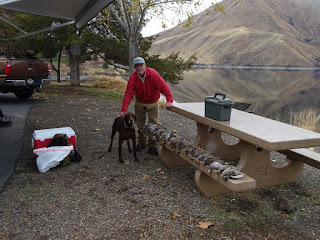 P.S. You never know what these dogs are pointing. 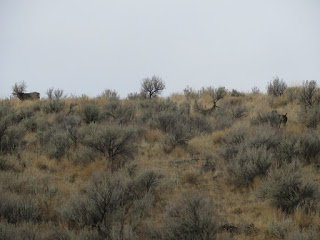 Posted by larry szurgot at 8:48 PM

Been enjoying your blog for awhile now. Really appreciate the time you take to share your hunts with us all. I was also camped in the Brownlee area this weekend. I have a Shorthair just over a year old and an English Setter that is 10 months old. We really enjoyed our time and the dogs had a great time. I will have to look out for your rig next time. I am over there quite a bit. Keep up the great work and look forward to the next one!

Larry, how did I miss you? We hunted all last week except Friday and Saturday in the Brownlee area. Saw lots of birds too. I guess I'm just going to have to check out the campers for bird hunters until I find you. Glad everyone is finding birds. Thanks for your great pictures and warm commentary.

Chase and Ron. Sorry we didn't meet up. Look for the brown ford with TUCKOTA plates and I won't be far away. Super glad to hear you guys are finding birds. I hope the weather keeps cooperating and we all get to put loads more miles on our boots and dogs paws. Good luck.

Larry
It was a great pleasure to get to spend a wonderful weekend with Barb, you and Jake! All three of you were very gracious to share your trailer, food, and hunting with Annie and I. We had a memorable time for sure! It was nice to meet Greg and hear of his day's hunt too. You and Jake (and Barb) are obviously a close team that produce experiences that make life so rich. Thank you for being so generous with your hospitality! Your willingness to share your passion for dogs and hunting birds with your dogs has always been inspiring to me and it was impressive and rewarding to get to actually spend time with you in the field. Thank you very much and I look forward to the next time we can be together!!

I'm so glad you got to meet Larry and Annie. I'm still hobbling along in the fields. sounds like you all had a good time.Mays split a nail so he goes to the vet today in Emmette. I have began explore the hills.Mostly I'm hunting pheasants due to foot problems but enjoying being out with the dogs.My house should close in New Plymouth first week of Dec.Glad to hear you met Larry.He is a great guy!