A different type of March madness.

Evidently everyone is excited about basketball, fishing, keeping track of what is happening with the possible new Idaho trespass law, or some other activity because Jake and I are getting fewer responses and I'm seeing fewer post on other sites about chukars. Understandable, there are other things besides chukars and chukar dogs, but Jake and I are still living the dream. We're still getting out at least three times a week on some sort of a chukar mountain and everything we are seeing is very positive for this time of the year. We haven't spent any time over in Oregon this spring but western Idaho has as many birds as I've ever seen this time of year. They are almost all paired up except for a few small covey's so now all we have to hope for is a favorable spring and early summer.

As you have noticed, I'm having some fun trying to film Jake on birds this year and have had hours of films of Jake on point or flushing birds. I have learned that one of the things I miss seeing is Jake running the hill and suddenly slamming on point. It almost never happens that way. Almost every point is after he disappears over the next ridge or into a draw. I've had hours of him running on camera but yet to see that head jerking slam to a point.

Another thing Jake has pointed out to me this spring is how far chukars will run. They are starting to give pheasants a challenge in distance running and add the steep hills they are on there is no way us humans can even begin to keep up. I watched Jake track a pair of chukars over a quarter of a mile before he finally bumped them. They didn't just go straight up the hill, they also cut through the draw and split up trying to confuse Jake. Here is the last 30 seconds of a 4 minute chase pointing and tracking the birds. He got bird number two up right after I turned the camera off.

I've learned from Jake's actions what to expect. When he is searching for a scent he is usually running with head high and pretty quick but when he puts his nose closer to the ground he usually is scenting a bird that has moved as he was doing here.

As I mentioned there seems to be an abundance of chukar and huns in the mountains. Probably because of the very mild winter we had. My next post on how I think the birds are doing won't be until July when I hope to see little birds everywhere and will try to excite chukar hunters with a few pictures of the great hatch. Keep fingers crossed. For those like me that just like to watch dogs and wildlife, I'll be having fun with video's until then and posting some for fun purposes. I understand that my views are going to go down for the next few months because watching my dog is not as exciting for everyone else as it is me but hopefully you'll come back when I have some good news about chukar hunting for you.

Meanwhile, a video of Jake a couple weeks ago. He had found some birds but other chukars kept flushing around him distracting his point.

BREAKING NEWS. Since this post there has been news of a new recruit to the chukar hunting community in Oregon. Watch out chukars and congratulations Ben. 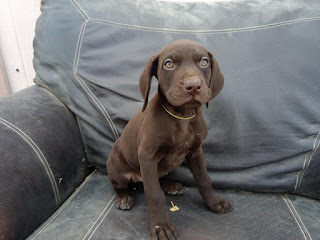 More breaking news. It was five years ago this week that we brought Jake home from Montana. 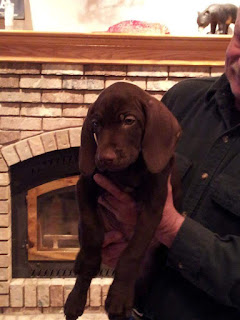 Posted by Tuckers Chukars at 11:02 AM

Larry, I posted on your Facebook page that I am now the proud owner of a liver GSP female named Bernadine "Bernie" for short. Look what you did to me! A guy said he had an a liver one and I just had to have her! You are rubbing off on me!

That second video was awesome. Seeing Jake quiver and seeing the chukar scamper through the brush before taking flight!

Just saw your pup and maybe you've helped make a 180 in my life. Going to start searching.

I am joining you Larry....working on a 2nd one myself.
BTW, I hope we can dodge the May/June cold stretch.
If we can, it sounds promising. Finally, how old is Jake?

Jake turned five in January. He's had five hunting seasons under his collar. Let me know about number two. I agree on that cold stretch. They are calling for up to six inches of new snow tomorrow night and Sunday. At least it will melt quickly and hopefully be gone for good.