The chukar seasons of 2010 and 2005 were the best seasons that I have had in the over thirty years that I've been keeping track. 2018 might just go down in my book right in between the two of them. Even as hot and dry as it has been me and the boys are having a ball finding birds. Barb, Jake, Grady and I just got back from the big pond and it was probably the most successful trip I've ever had.

It wasn't easy, but we didn't think it would be. The first two days were hot and dry and I packed a lot of water for the boys and although day three was cooler and a good breeze I had to pack a lot of water for Grady on his first solo hunt. His first solo hunt took me back in time to when Tucker took his first hunt at just over 6 months old and I got 8 chukars off his points and he retrieved most of them to me. I knew I had a winner. At 8 months and 12 days old Grady did all the right things to make me believe he's going to be in a class with my past great dogs. By the end of the day he had put 8 chukars and a hun in my vest and all were pointed and retrieved. I was a pretty happy man. 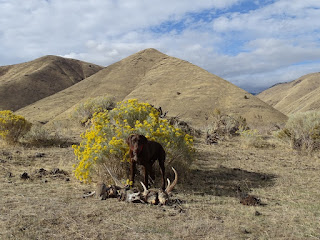 Like I mentioned, it wasn't easy. In the three days of hunting, I put in 22 miles, Grady put in 66 and Jake put in 42 miles missing the third day for Grady's solo. I didn't keep track of elevation gain but I have to guess it was between five and 6000 feet for me and only God knows how much for the dogs. When I say I couldn't hunt on day four because I had already gotten my chukar possession limit I don't mean it as a brag but more as encouragement to get out there with your dogs. The birds are definitely out there. They are not running along the road but I saw at least a half dozen covey's of chukar with at least 50 birds in them and probably 20 or more covey's of twenty or so birds. I also saw one really large covey of huns along with a dozen or so smaller covey's. 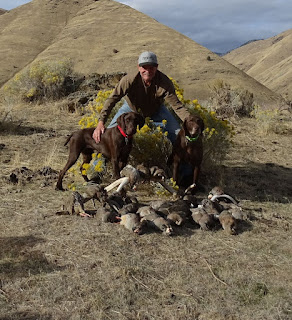 Most of the birds were a little wild, but once in a while they held tight while I walked up to the ridge where one or both of the boys were pointing as Grady did here. 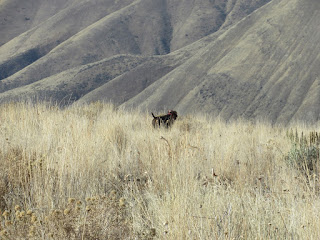 There were some dry periods but it seemed like when you found birds there were several other covey's in the close proximity. Although I was glad to get Grady out on a solo hunt there's nothing more fun than watching the boys work together. 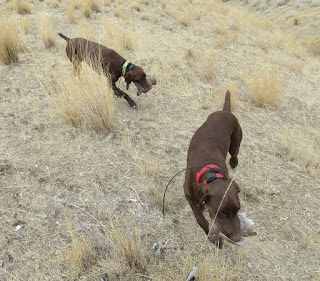 Sometimes there is a pleasing surprise along the way. 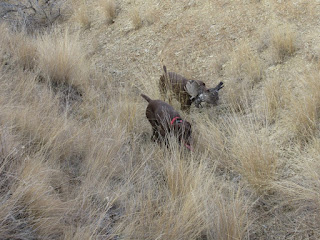 Another great surprise was Greg Munther showing up on day three. The old fart (75) took his first year pup, Oakley out on my day three and came back with three huns and three chukars. He's going to hang out over there for three or four more days with a friend and help to keep the birds educated. Dummy me, never even thought of taking a picture of him and his pups.

It really is looking like the year we've been waiting for. Lot's of opportunities for the dogs and human partners that are willing to hike. It's a great year for the young dog and the thrill of seeing the lights turn on. Be patient and don't get discouraged because sometimes it takes a while, but when you find them you're going to have a ball.

Posted by Tuckers Chukars at 7:13 PM

Emmie and I almost stopped by on saturday. We drove past your camp early AM, and thought I would swing past after my hunt. As you saw, I saw the same, good numbers are out there and once you find them, its typically in large groups. End of the day, I had to cut over the mountain as the river road was covered with 400 cattle, horses and dogs moving a few miles, and it would have been at least 2 hours just waiting for them to clear. Hope they didnt stampeed your camp.

We had a great chat with the cowboys, especially the twelve year old sitting on his horse. You could tell he loved riding his pony as well as we love hunting with our dogs. Passion's are what define our lives.

Please stop by the next time. I'd love to meet you.