Grady has become a hunter

What a difference weather makes in dog work. Until this week, the points have been few and even finding dead birds was tough for the dogs. Even Jake (in his sixth year now) had tough times finding downed birds.

Then the weather changed and we had some good rain followed by some cooler days. I even found some frost one of the mornings. With this change in weather, the boys found a different gear and started covering a lot more country and of course with that came more bird finds. Jake, as expected held most coveys pretty good but Grady couldn't contain himself while I covered a couple hundred yards to him and would bust the birds. He's honoring like a champ and letting me walk 50 yards past him while Jake is on point.

As the week went on and we found more birds I could see the light bulb flickering a little brighter in Grady's head and each point has been a little better and longer. Today he held a point like a stud as I covered the ground and moved in front of him and stood for thirty or so seconds before the flush and the light bulb got brighter as he retrieved the bird.

Two days ago, on a hunt with Conner, Grady made one of those retrieves we all love to talk about. Conner was sure he had dropped the hun dead and we had Jake and Grady on search for a dead bird. Pretty soon Grady was following the scent straight down hill and finally about 200 yards away we could see the bird jumping in front of Grady before he grabbed it and brought it back up the hill to us.

It looks like I'm going to have another fun year and for the first time in ten years with two dogs again. I'll let Grady get a few more trips under his belt and hopefully will be able to get some pictures of him and Jake doing what they love best. Meanwhile, here's my buddy's take behind Jake and Grady two days ago. 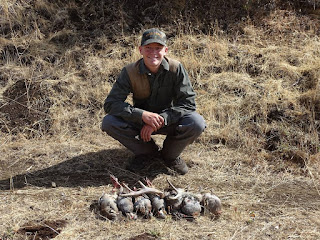 It was going to be a short hunt but eventually Conner got me to the top. Like usual we started down at the bottom of the draw behind him and gained 1650 feet before I impressed upon him that the old man was getting worn out.
Posted by Tuckers Chukars at 5:52 PM

Looks like a great hunt with Connor! He is growing up! We are visiting grand girls in SD. Weather changed here too. Supposed to snow the next three days.

Well done on all accounts.....dogs and Conner....and you for keeping up. Need to talk with you re Oakley retrieves...or lack of....she enthusiastically goes to the down bird, but nibbles/mouths it instead of picking it up. Have tried frozen huns, pheasant wings and same result. I have taught her to hold...then command fetch and that works to bring to me but wont pick up on her own...help!

Larry, I've been reading and enjoying your Blog for several years. I live in Iowa and have hunted chukar in Nevada, Oregon and a couple years ago, the Magic Valley area of Idaho. I have your Blog to blame and thank, for my misbegotten chukar adventures:-). The areas I used to hunt have poor forecasts this year for everything so will be scouting ground in SW ID in early December if I come. I can't rationalize a trip for just chukar as they beat me and my old Lab up pretty bad in just a couple of days, but me and the old girl do love to break up the mountain days by chasing quail. I heard that there was a decent hatch in the summer, but haven't heard how the quail fared through your hot dry spell.

I just hate being the guy who asks for a report online, but I just don't know anyone out that way, even in the areas I have hunted. If you don't mind, generally speaking, what say you?

The quail seemed to do well this year. They were a little late on the hatch but I am seeing good numbers to and from my hunting locations. Two weeks ago, Conner said he had to hold off from shooting a bunch of quail because they were too small. If you do venture over this way give me a call and I'll try and be a little more specific. It's a long way from Hawkeye country but I think the numbers of huns, chukars and quail might make the trip worth while. (208) 861-2907. Leave a message because my phone is usually out of cell range.

Greg, I wish I could help you with Oakley but hopefully lot's of birds and excitement will correct that. We went out today and Grady retrieved a chukar about 75 yards and than dropped it twenty five yards away. Nothing I said would get him to go back after the bird. Jake finally picked it up and brought it back. The next two retrieves with Grady, I kept slowly walking away on a trail and he brought the bird right to me without a word being said. The dogs have a couple of days off while I take Conner and one of his friends on a deer hunt and I'm hoping after that Grady will be chomping at the bit to retrieve more birds. Looking forward to seeing you and the pups.

I will just chime in to say glad Grady is doing so well, and hope you can spend as much ground time with Connor as possible.

Also to say I think the quail are , from what I saw a week or so ago, behind the other birds in terms of recovering from the winter from hell two years ago in the areas I hunt which are north of Larry. I only saw one covey in four days anywhere , in the feed lots, on the roads or in the field. Partridge doing better than the quail l would say. 2 cents

Really enjoy your blog! Thank you from an older chukar hunter.

Great to follow Grady's progress, it's very fun to watch the learning process as they figure things out. Go Grady....and of course Larry:):)