This summer someone asked me what the effects of brush fires had on chukar populations. My answer was that probably most of the birds succumbed because of the speed of fires and the young birds would probably hold until it was too late. This fire was in early August and the winds picked up and ripped the fire across the hills wiping out every thing. 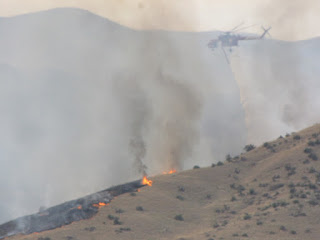 I was sure that most birds were gone because of the speed of the fire but Conner and I walked one of the failed dozer fire breaks in the middle of the burn and were very surprised at how many chukars were there with very sparse grass just stating to show. In the black ashes we could see large coveys running all over the place We were shed horn hunting but the dogs were still with us and the birds were having nothing to do with holding for them. We found evidence of animals that weren't as fortunate as the chukars. 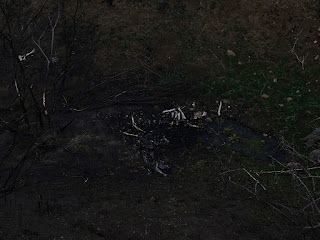 I decided to come back in a few months after the rain knocked some of the soot down and see how the chukar hunting might be and yesterday was that day. I was pleased to find the birds had stuck around but as I thought they were wild. If chukar hunting isn't tough enough already, try hunting them in no cover. That adds a little more flavor to it. Most of the time there were long range points like Jake shows here across a canyon. 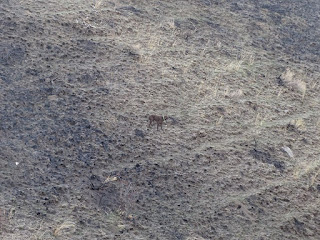 Those birds were a joke in trying to get close to. One of the biggest problems in hunting them in this open country was the dogs being able to see them. Several times the dogs would be locked up until I got close to them and the birds would start moving from me which was more than the boys could handle and a wild flush would follow. 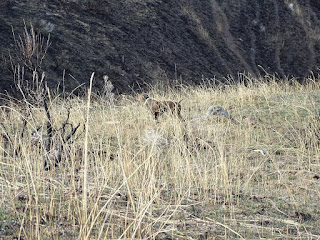 Every once in a while a point would come at a ridge top where the breeze came up from the other side and I could swing over in front of the dogs and be in reasonable range for  a shot. 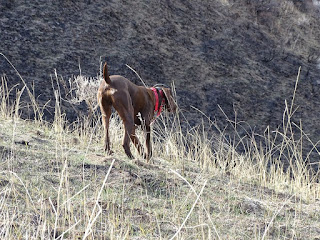 Sometimes I was even successful with a shot. Most of the time I was lucky to get just one shot off. 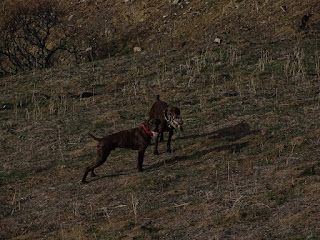 The biggest problem I had was with Grady. The country was so wide open he decided to spread his wings and once was 550 yards away which I don't like. Hopefully I corralled him in after that and we got relative distance figured out. He started figuring the game out and gave me some good productive points. 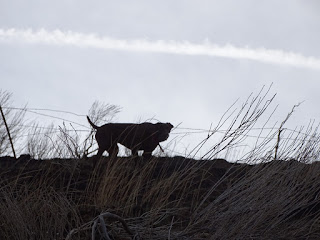 I had the camera on the wrong setting so the pictures are a little dark but at the time the points looked great to me.

Although most of the time when I got a picture of both dogs on point the birds got up a little wild it was exciting to watch them work together. 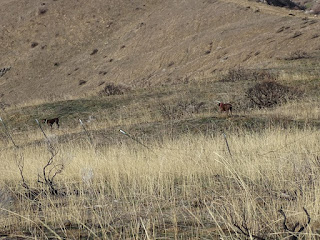 This picture has the dogs with a bird in between them. I looked hard but couldn't find a bird but as I approached two chukars flushed and I crippled one and dropped the other. 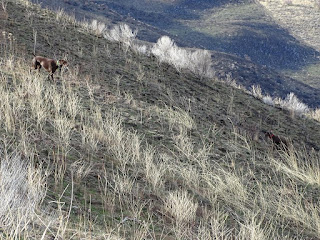 Grady was off chasing the cripple while Jake was taking the easy way out. 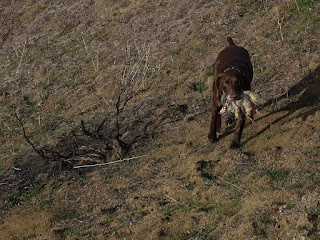 Okay, boring, let's get back to fire and chukars. After watching two different good chukar hunting spots burn this year I have decided I don't have any idea of what I am talking about. They obviously can outrun fires and even though the heavy vegetation is gone they will stay in the area. I don't know what they eat before some moisture comes and the grass sprouts show but they were there. They don't like fried grasshoppers because we found several diners where the food hadn't been touched. 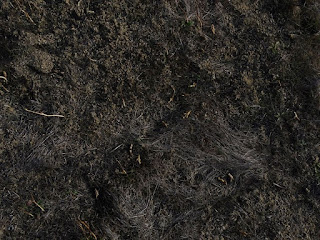 Also, these birds had more fat reserves than most of the other birds I've shot this year. I figure maybe the fresh green sprouts with whatever the fire puts back into the soil is responsible for that. I don't know how these birds are going to fare if the birds of prey find them but they seem to be fine with the lack of cover. We found this same thing in the Owyhees a few years back. The sage grouse didn't do well but the chukars and huns did well, not needing the sage cover as much evidently.

I  know many times hunters get a little upset with how game is regulated but I believe chukars and huns pretty much do their own regulating. They have definitely had their good and bad years but for as long as I can remember (back to 1970) chukars and huns bounce back without any help from humans. Although they'll use water sources provided they need very little and will find a water source in the most arid area's and survive without a provided guzzler. And now it seems that they can find food even in what looks like a totally black environment.

Remember, this is coming from me, the guy that quite often get's his brains beat in by doing stupid things, but don't completely ignore those fire areas or areas seemed overgrazed. The birds might just be there. It's just up to you to keep positive about what might look like poor dog work until the right point comes along and than keep hustling for the next good point.

Posted by Tuckers Chukars at 1:40 PM

Thanks for the deep thoughts about important stuff Larry. The question that comes to mind is how these fires contribute to the ongoing threat of medusahead rye. It seems to be rapidly spreading and I expect that fires may provide a seedbed ripe for more infestation. Medusahead areas seem to be biological deserts for game birds, and no practical way to eradicate it.

Thanks for this amazing report Larry. I am starting to think you and your boys could find birds just about anywhere.

Thank you for your blog. I guess I have had a different experience. Where habitat and sagebrush cover have burned off chukar will leave in the long term. Normally they cycle up and down, but where I'm from we have had huge fires. The springs tend to dry up and even after 5years there are no huntable numbers of birds.