I've packed a first aid kit for both me and the dog's for a long time but never needed it until yesterday. Although it wasn't an emergency like Greg Munther's dog, I was glad I had the kit along.

I noticed some blood in the snow and saw Jake licking his foot off and on but at first I thought it was just one of those little cuts I often see in crusty snow in paw prints. When Jake quit hunting and just walked about ten feet in front of me I decided to check it out. I was shocked to see a small stick sticking through his paw. 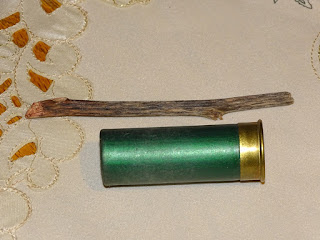 It wasn't a big deal but needed attention all the same. The stick had gone through the web in his left hind leg with about a half inch sticking out the bottom and 3 inches out the top of his foot. When I pulled it out Jake didn't even flinch. There must not be many nerves in the webbing. The blood tracks suddenly were a lot more obvious and I thought we might head off the hill but after applying some EMT gel the bleeding stopped and Jake was off to the races. I kept an eye on his tracks and there was no further blood in the snow so we finished the day off chasing chukars with Grady.

Not an exciting story but it shows the importance of always having that first aid kit with you.

Two weeks left in Idaho and Oregon so get out there and have some fun. The birds are very wild but still fun to pursue.

P.S. Although this was the first time using my kit on a dog, my kit has been used several times to fix a broken gun on the hill.
Posted by Tuckers Chukars at 9:47 AM