Everyone that has chukar hunted knows how frustrating it can be. There are hundreds of things that can go wrong on a chukar hunt. Some times just getting to your hunting spot can be a challenge. Then you have to figure out where the birds will be this time, whether you want to challenge yourself on the frozen steep hills, will the birds be wild, is your dog going to act like a chukar dog should or is he going to act like a pup on his first hunt?

Even when everything seems to be going right, you move in on a solid point, ready for the shot and as the birds flush a rock slips out from under your feet and sends you to your back side as you watch the birds race to the next ridge. Or maybe the birds flush at 50 yards and you empty your gun without seeing a feather fall and then the rest of the covey flushes at ten yards away. And the times the mountain is so steep the swinging shot sends you and your gun rolling down the hill. I could go on and on but if you have chukar hunted much you know how many things can mess with you. Sometimes you might even feel like the golfer who just shanked a shot and proceeded to snap his club in half.

Conner and I were on a hunt today and he found this shotgun on the hill. 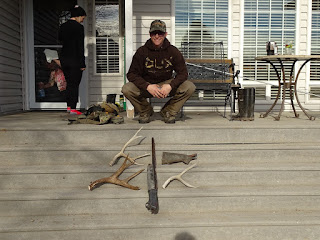 We've found a lot of things in the past but this was a first. By the way the barrel was bent and the stock was broke off it was easy for us to figure the gun was broke intentionally. Maybe not, but we surmised that the person had just emptied his gun on a covey of chukar and once again no birds fell from the sky. Being tired from the long hike in he finally broke and slammed his gun over a rock and then grabbed the barrel and broke the stock. 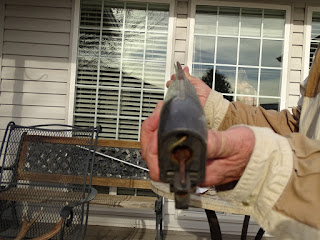 That may not be at all what happened, but we all know how chukar hunting can work on your mind. I know I've been close to the breaking point a few times. Let your imagination go and maybe you can come up with a better story.

And how about these glasses. I found them in a place where I can't imagine anyone but a chukar or bighorn hunter would be. 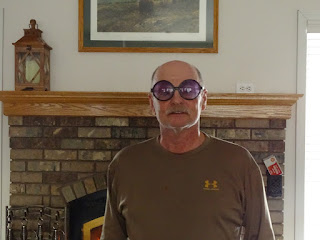 One person told me that he had heard that Elton John was a chukar hunter and maybe he lost them. You think about it and maybe you can find some reasons for the strange things we find back in those places where we think no one else has ever been. I'm up for any possible answers.

Two more days for me.
Posted by Tuckers Chukars at 8:18 AM