The pain of loosing a dog

A good friend of mine lost a hunting companion yesterday. As with most of us, his dog was not just a hunting tool, he was family. From the moment Jeff picked the pup he had made an impact on his heart and his soul and with every day the bond grew deeper and deeper.

Jeff Knetter called me this morning and told me he had some sad news. I could tell from his shaky voice he was very upset. He told me that Fergus, his large Munsterlunder, had passed away while on a hunt. Evidently, Fergus had just pointed a bird and the next thing Jeff saw was Fergus fall to the ground and not move. He was only nine years old but evidently his heart had given up. Jeff gave chest compressions  and mouth to mouth with no results. I can only imagine the tears and sadness from Jeff as he had to carry Fergus back to the vehicle. A walk he will remember forever. A walk I hope I never have to make.

October, a year ago, Jeff asked if I could take Fergus for a week while he was on a business trip. He said I could take him hunting if I wanted and that sealed the deal. I'd seen Fergus and Jeff hunting from a distance and knew he was a fine dog. Jake had never hunted with another dog so I was interested in seeing how he performed as well as how Fergus would work with Jake. I hate to admit it, but Fergus showed off his fine training.

I never got to see Jake honor Fergus that day but don't know that he wouldn't have, but saw Fergus honor Jake several times. I just concluded that because Jake ranged a little further he just found the birds first but it was such a pleasure to walk up on his honor. 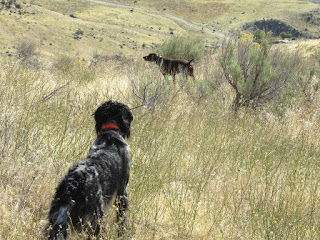 Like Jake, he had plenty of fine points that day and he held patiently as I walked ahead of him for the flush. Not a word had to be spoken. He knew what his job was. 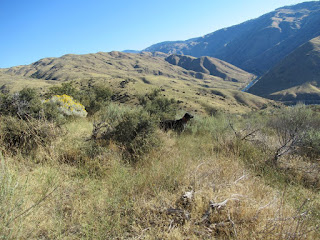 Probably the most impressive thing for me was his retrieve. Not only did he bring the bird straight to me, he demanded I take it from his mouth. That is something I have never requested of my dogs. They usually drop it on the ground at my feet. It sure was a pleasure to not have to bend over to get the chukar. 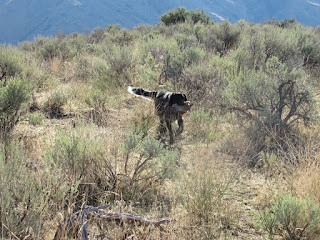 I'm sure that huge hole in Jeff's heart will never completely go away but time will help. He has a young female Munsterlunder to keep him occupied on the mountain. She has hunted with Fergus and learned some of his tricks and one day he'll be able to tell her "I don't think ol' Fergus could have done it any better".
Today I took my boys on a special hunt. It was the spot Fergus, Jake and I hunted last October. Although there was snow today we found chukar in the same bunch of rocks as Fergus and Jake did back then. 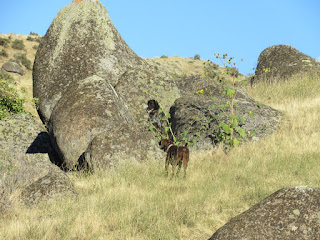 Yes, we got a bird from there again today. Just as we did last October and guess what? Grady retrieved the bird back to me without putting it on the ground. It's not the first time Grady has done that but in my heart it was for Fergus.

I don't know if Jeff reads this blog, but if you do, know that you raised a great dog who represented you well and there are many of us out there saying a prayer for you and your family.

Thanks for letting Fergus be a part of my life. 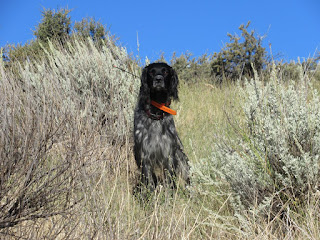 Posted by Tuckers Chukars at 7:16 PM

I heard about this from a friend. Thank you for such a nice tribute to Fergus. Burk