My little buddy has become a duck and goose hunting fanatic. So when he called a couple of days ago and said he wanted to do some chukar chasing I was more than thrilled to hit the snowy slopes again. The bird numbers were great and I'd have to say we saw a couple hundred birds. Most of them were running straight up the ridge or flying from the predators high above but they kept us encouraged that sooner or later we would get some points.


Conner and the boys had a little more hustle than I did and were soon hunting way ahead of me. I was amazed at how the dogs abandoned me for Conner. I guess they knew who the shooter was and I was happy just to hang back and watch. The day started out with this point (Grady is in the brush and Jake was honoring) and shot.


I really felt bad when the bird fell on the other side of the draw and the three of them had to go find it while I caught my breath.

Not much later, the boys pointed another covey and Conner got a double with one dropping dead and number two crippled it's way down to the deep brush. Conner had to help the boys located the bird and Grady finally stuck his head in and brought it out.

We had gained as much elevation as we thought we needed and started to cut across the slopes. Of course the northern exposures had a foot or two of damp snow to trudge through but the southern faces were bearable and the boys had yet another find for Conner. I cut the video short trying to get into a better position to watch Conner but before I got there he had one more bird in his bag.


The final point on camera was too much for me to handle. I'm saving the flush of these birds for another time. I was thrilled to watch Jake honor Grady as soon as he saw him but suddenly his attention turned to scent. Somehow the three of them had walked into the middle of a large covey of chukar that were lucky Conner was carrying my alternate over and under. He fired his two shots and dropped a bird. He didn't even try and reload but yelled up at me "wow, I've never seen that many chukar at one time.


Conner now had five chukars in his vest and I hadn't fired a shot. It's no wonder the dogs wanted to stay with him. We had gone almost three miles and a lot of the birds flew back behind us. Conner tried to convince me that most birds flew ahead of us but I was sure they had gone back toward the truck. As we headed back towards the truck the dogs picked up lot's of stragglers and Conner had to walk with an open shotgun. He had his eight birds. 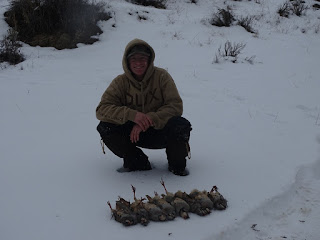 With the camera down I finally got to participate and added another five to the pot. 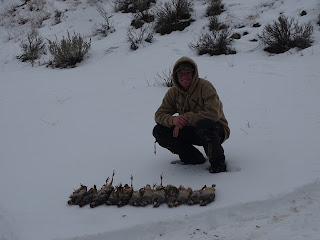 The duck season closes Friday so I think Conner will be hunting with me next week end which will be the final weekend of the season. With 12 days left in the season I'll be chasing as much as possible but Jake and Grady get pretty spent after a days hunt in the snow. Of course I could go every day because I float like a butterfly through the snow. NOT!
Posted by Tuckers Chukars at 8:47 AM

Good for you and Connor and the dogs. Don't tease us Larry with the "tune in next time" to see the REAL flush line!!! :

Gentleman, with the season coming to a close I have to have something out there to keep chukar hunters interested. Dangling a carrot.

Real chukar hunters wouldn't miss anything on this site no matter when you posted it!!! keep 'em coming G-Man from Tenn

Lots of snow in the video.I like the video with Connor holding up the chukar to let grandpa know he found it. I hunted Friday the last day of the season. The young man who has been going with me who is close to 40 backed out. Gracie found and pointed 3 coveys of huns but no chukars. when I went up to flush the birds,they got up 60 yards ahead. I shot twice but to no avail. I would bet my buddy would have got there in less time and had a better shot. I even did a slow jog over to the last point but the birds had already ran a good distance. The snow had melted off in that area. I had to go alone today which is ok, I missed my roadrunner as he can get there much quicker. saw some turkeys up there, have never seen them there before so that was cool.
Alan and the Setter,(she said I need to go on a diet so maybe I will).

Alan,
I made it out the last three days also. We're the same age and I can tell you I don't think dieting is going to help us. I think we're getting to the point of keeping our fingers crossed that the birds will still be there by the time we get to the point.