Admitting defeat is tough. Especially when it is between me and an inanimate object like a mountain. After this hunt I am giving in to the mountain and snow. The two of them together have beaten me. As much as I love watching the dogs work, these kind of days are no longer a challenge but almost torture. I came off the hill hurting so bad that I was ready to give it up. Of course after the long drive home with the hounds I once again can't wait to be on the mountain again but without the snow. Here's a summary of my day. Be prepared for a little whining.

The day began with around 4 inches of new snow and the temperature on my truck said 29 degrees. The roads were fairly clear to my destination until I got to the one lane dirt road which went up the mountain for about three miles. My truck made the only tracks for the day on the road. After getting stuck twice coming out I figured out why my tire tracks were the sole tracks for the day. I was the only one stupid enough to drive in there.

The snow was falling again but the temperature was very comfortable so Jake, Grady and I headed towards the mountain we intended to hunt. 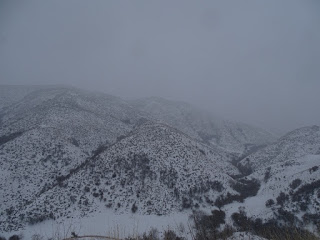 You can see a 4 wheeler road in the draw but it can't be accessed this time of the year accept by snow mobiles which I actually saw one year but they were lion hunters. I knew once we got on the mountain we would be having bird dog fun. The problem became getting on the mountain. The walk in the draw wasn't too tough but eventually we had to head up. This is where we eventually started up because we could see chukars crow hopping through the rocks above. 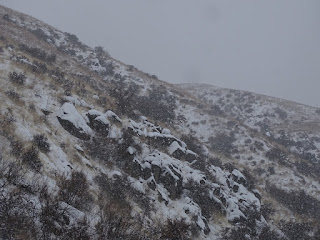 Needless to say, my alpha said dog on point several times but before I could even get in sight birds were diving over the top of me heading for the other side. I never knew whether the dogs flushed the birds or what and after several falls I wasn't even caring very much. I just knew I had to get to where I could get some solid footing for a shot if it ever presented itself, and I was starting to doubt there was such a place. Here's a short video of Grady as he moved over the hill wondering why I never shot.
At one spot in the draw he had a hard time leaving it with all the tracks left after the birds got off their roost. I never saw those birds but could hear them taking off one by one, wondering how much fun it would have been if I were just 50 yards up the hill.

After 2 and a half hours I finally got above all the bad stuff (not for the chukars but for me) and followed the boys looking for birds.

We had climbed over 1800 feet and I could follow game trails around the hill to get to points without the worry of splitting my head open. By now my back was killing me but there was no way I was coming off that hill without seeing the dogs get a few points and me getting a few shots. We were in about 6 inches of snow now with soft dirt underneath. I wasn't up to taking pictures but did manage to get this long range shot of Jake on point but didn't get any follow up shots as I approached because I was more interested in putting a bird in the bag. 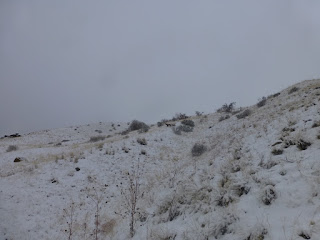 I also got the camera out to prove that I shot straight that time. 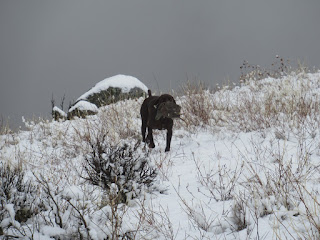 After about four hours on the hill I decided that I had had enough and started the trek back to the truck. Both dogs were hunting a lot closer now and I knew they felt the same. By now my back was gone and after we picked up one more bird I decide to break my gun down and put it in my pack. I shot a quick picture of my take with Jake and Grady, put everything back in my vest and slowly headed for the draw and the trail. 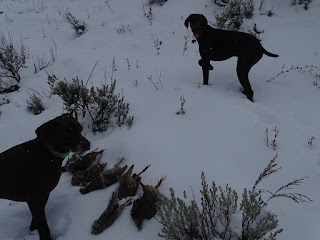 From that time on the boys seemed to know we were done with the hunt and pretty much broke trail for me to head down. By the time we got back to the truck I had gone 6.2 miles, Jake went 18.8 and Grady went 26.4. As I mentioned I got over 1800 feet in elevation gain and we had been on the hill for almost 6 hours.  That means I was covering a whopping mile per hour. To be honest, that surprised me. I thought I was even slower than that.

It was a very successful days in most ways. Bird numbers were great with some coveys looking to have close to 40 birds or more but those were the coveys we never got close to. We got more birds than I probably deserve but not as many as the dogs deserved. We saw deer, elk and a coyote. Pretty much what most would call a great day, including myself.

But back at the truck I wasn't feeling so good about it. I wasn't sure about the hour and a half ride home with my back hurting like it was. I stopped every 15 minutes to do a lap around the truck and stretch the best I could. The dogs were fine just to sleep in the back seat of course. My back has been getting worse every year and last year my doctor said I should probably look into getting an operation. This year it has seemed to get worse by the month. But more than a bad back, I think it's the snow and frozen north exposures. From the moment I stepped out of the truck until I returned I felt tensed up on each step. Somehow I think the brain prepares you for these conditions and you use different muscles as you hike.

I know that's a lot of whining for such a wonderful day but it opened my eyes to my capabilities as I approach 69 years of age. It's time to let the young men take on the mountain on these snowy days. Hell, I'm retired and can pick and choose the days I hunt now. I've got 4 and a half months to choose from so all I have to do is convince Jake and Grady that is best.

Just a thought for you guys reaching the middle ages. Stretch a lot and don't let your upper body get so out of shape and maybe you won't ever have to say I can't swing left to right or vice versa. Being sore is the pits.
Posted by Tuckers Chukars at 5:39 PM

Senior hunters have earned the right to whine. I'm approaching 70 and have a sore back (I love my heated truck seat) after hunting chukar today on steep, snow-covered rocks. I keep in shape and I'm sure it helps but senior bodies just don't take those hunting conditions. My GSP is only 7 months old so I plan on going as long as I can.

Thanks Dave. It's nice to know that maybe my pains are a common problem for guys my age. Grady will be 2 in February so I'm going to be at it for at least ten more years.

It's stories like this that keep me motivated to keep going when my body hurts. At 40 years old I don/t have much of an excuse.

I think we can form a new sport open to hunters that are 80 plus years old.It would be called the chukar sprint.A 100 yard dash up the hill.it would be open to betting. Maybe it could become an Olympic sport . I believe we get young dogs so we feel obligated to go on hunting when we should retire. We could put videos on you tube and maybe raise enough money to buy a good shot gun. I do feel your pain,not just in my back but all over my body. Keep on trucking Larry.
Alan and the setter.

Ben, you don't need old men to keep you motivated, the dogs do that. As Alan mentioned that is the reason we get young dogs. Chukar hunters are the ones that hid behind the door when God passed out brains.