I had a good hunt over at the big pond today. Good because we got some birds, had some fine points, shot fair and didn't break anything or hurt anything. 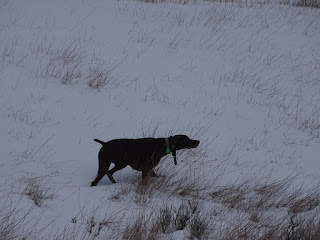 We hunted in up to a foot of snow and a fierce wind. Luckily the temperature was somewhere in the mid 30's so it wasn't unbearable. There was no crust on the snow but the chukars ran on top of it as if it were a concrete highway. It's amazing to see the length of their stride. 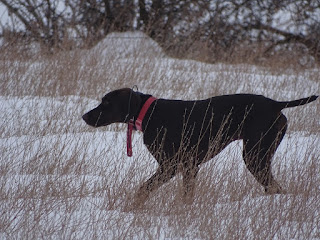 Dog work wasn't the best because the birds running were so visible. Jake started a new habit this year of yipping at running birds and he did a lot of yipping today. We also saw birds flying high above us from all the birds of prey. The birds were also talking more than I have heard this year. I didn't see another rig on the way in and I'm pretty sure the only hunters on those slopes were the Eagles, Hawks and us. 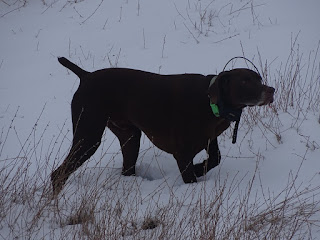 Although we never saw the sun the temperature was warm enough to melt some of the snow. A few more days like this and it might get easier for me to get to the points. The steep ridges combined with the snow were sometimes taking me 10 minutes or so just on 200 yard points. Especially when they were on opposite of the draws. Only once today did Grady get outside of 250 yards and that was because he was on chase of about 30 birds that crow hopped around the hill 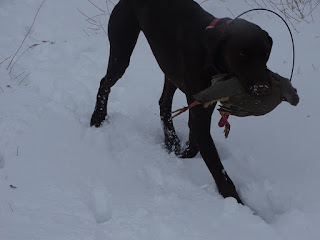 As usual the birds used the rocky area for shelter  and every time we approached one of those areas there was at least one chukar to be pointed. 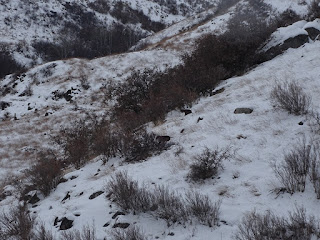 I'll make it short by saying there is still some great hunting to be had over there and I assure you I will be over that way in the next two weeks as often as I can. Go get em and good luck.
Posted by Tuckers Chukars at 7:43 PM

These conditions look a lot like ones I encountered one day elk hunting. I went out just for the day.

Where I live, like everywhere in the U.S. dogs have no role in big game hunting, but I did think about bringing him and getting him some exercise if I didn't see elk. And I packed a shotgun in the truck.

Pat,
My grandson and I went coyote hunting in November and while we were sitting there calling there were chukars running an chuking all over the place. The next week the boys and I went in for the slaughter and didn't see a bird. Almost like they knew what kind of weapon I was carrying.