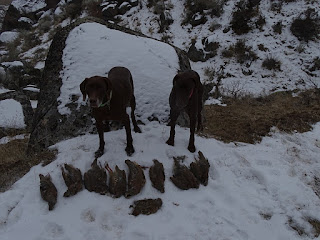 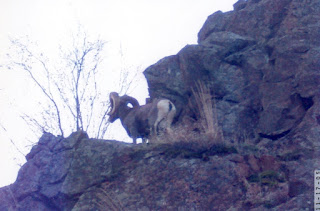 Posted by Tuckers Chukars at 4:37 PM

Sorry Larry that recovery is coming slow for you but I do admire that you get those dogs out. Guess we will have to find flatter ground for awhile. Hey, I can drive you to the top and you can work down hill. Let me know if I can help. Take care of yourself,see you when you come through this big town.
Alan,Gracie, and Piper

I'm sorry to learn your recovery isn't going as well as hoped, and I'm very sorry about the back surgery.

I'm not facing anything like you, but after years of living as close to being a subsistence hunter as my wife will allow, I'm finding that this year. . . 2020 you know, has me so worn out that some weekend mornings I'm at the "maybe I'll just stay home". But then what would the dog do? He's waited all week.

It's hard to imagine what we would be like if it weren't for the dogs. They seem to be the catalyst we need at times.

I also am sorry for the lack of progress you were hoping for with your knee and back. But, you are a fighter and circumstances aren't going to keep you from the things you cherish most! Those two dogs live for the trips afield so I salute you for pushing through the pain to get them out there..

What a blessing to have such great numbers this year in your hunt areas.

I too am committed to getting the dogs out even though they are running through LOTS of birdless miles. Horrible dip in population here. Sometimes not finding a single bird where we once shot limits. Never the less we go.....

Sorry to hear about the birdless miles. I'm hearing that from a few others. That's as hard as anything. Not being able to see a point now and then. The good thing is that chukars are very resilient and hopefully the next year or two will see a big rebound. I know that doesn't mean a lot to our pups who only have 12 or so good seasons of hunting. One lost season is a lot.

I almost feel bad mentioning the fair number of birds I am seeing and complaining about my condition.

But, complaining I go. Three days ago I came down with covid and the dogs are stuck at home with me once again. I don't even see that many people and spend more time on the mountain than most people and still got it. It has me feeling pretty puny but it too will soon pass and the boys will be thanking me for getting off my dead butt.

No matter how many birds we find, the end of this season is going to be dynamite for me and the dogs. We're just going to be happy to be on the mountain.

Covid?....CRAZY.!..lay low and let it go. Hope it's over soon for you as it was for a couple people I knew with it.

Fun thing about folks like yourself that are humble and honest is we get to enjoy your experiences with great numbers as you share your stories here. Thank You for your effort here. I have followed over the years and always enjoy!


Larry, so sorry other about the covid you are experiencing. l hope it gets behind you quickly. As strong and determined as you are l am confident it is a mere bump in the road and you will be back out there shortly with those dogs.
Gentleman from Tennessee

Thanks guys. Just getting it all over with before 2021. Me and the dogs are going to make up for all the set backs this year.

We may be slow following the dogs but when they check back in they will see we are dedicated! Keep on trucking, you are a tough guy.
Alan,Gracie, and Piper(see you out there soon)